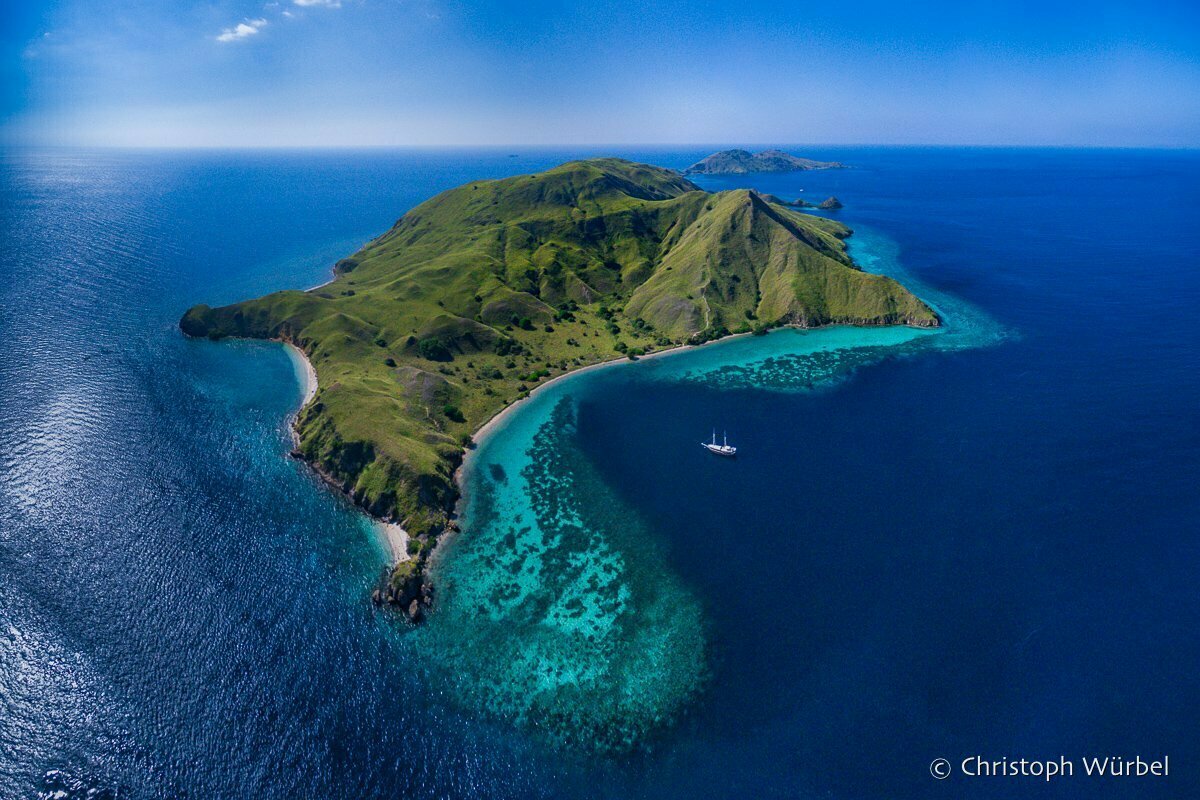 Komodo seen from above, it's even more beautiful

Drones are the new trendy gadget for travellers... On the boat taking me to Komodo, Indonesia, two of my little diving buddies have one!

Komodo filmed by a drone

So I have these wonderful images of Komodo seen from the sky at Christoph Würbel, a German expatriate in Asia, based in Singapore, who was like me on vacation in Indonesia in this month of July 2016. (He post other aerial photos here.)

Two months after I came back from this new diving trip in Indonesia, I made a little montage for the blog from his drone videos. So I rediscover them on my computer screen... How beautiful !!! 😮

It must be said that this volcanic archipelago of Indonesia is really the perfect place to shoot magnificent spectacular aerial images, in fifty shades of blue & #8230;

It consists of three main islands (Komodo, Rinca and Padar) and many smaller ones. To help you locate, it is here:

This is my second stay in Komodo. I had already dived there during a previous trip in 2011.

The pretty little red and white two-masted on the video is my new princess boat, the Duyung Baru. I chose, like six years ago, for a small pinisi (a traditional Indonesian boat), all comfort & #8230; I boarded with five other divers for a week-long cruise (another one solo trip where I never ran out of company). Great boat, great international atmosphere (Germans, Finns, Indonesians, Australians and I, the little French girl), I came back delighted & #8230;

In the incredibly fishy waters of the Komodo archipelago, manta rays can be observed very closely, whether you're a simple swimmer in a tuba-fins or a scuba diver or freediver (more underwater photos to come in a future special mantas post)... You can see them well in the video of the drone: they are the black rhombuses which are on the surface, around the dinghy!

The images taken from above show the typical landscape of the archipelago: steep hills covered with savannah, which tumble down to white sandy beaches and azure waters, where coral outcrops. You can see from the vegetation that the climate here is much drier than in other parts of Indonesia.

Even if the archipelago has become quite touristy, you really have a very exhilarating feeling from the end of the world when you sail in this intense blue sea dotted with deserted and wild, rather preserved islands. Komodo is a national park, inscribed on the list of World Heritage and UNESCO Biosphere Reserves.

How do I get to Komodo? The region is very easy to reach from Bali : there are many daily flights to Labuan Bajo, the port located on the western end of the island of Flores, just in front of the archipelago. The duration of the flight is approximately one hour. I prefer for companies Garuda and Lion Air / Wings (schedules and rates are on their websites). Update (October 2016): since Jakarta, there is now a direct flight Garuda for Labuan Bajo !

Komodo belongs to another world, almost a lost world. Located at the junction of two continental plates, the archipelago is on a volcanic "belt of fire" between Asia and Australia. Unique terrestrial and marine ecosystems have developed here, and species that exist nowhere else!

The most famous one, you may know it: it's the Komodo dragonTourists are allowed to disembark on the islands of Rinca and Komodo to observe them, accompanied by rangers now dressed in a jacket flocked with the words "Naturalist Guide" on the back.

Rinca (pronounced "rine-tcha") really does have a little side. Jurassic Park. Listening only to my courage, I gave up mantas and sharks for a few hours to return to see the dragons - old friends, who I went to say hello in 2011... ????

The Komodo dragons are very impressive, especially if we are lucky enough to meet them during the trek on the island (and not asleep near the trash bins of the rangers). But I admit, it's still the creatures that live in seawater that I prefer to admire and photograph & #8230;

The adventurers of the lost path

To conclude this little overview above the surface (while waiting for the underwater images), I leave you on a few images of another island, the very photogenic Gili Lawa Darat. This is the one we see at the end of the drone video, with our small group of divers at the top of the high hill overlooking the bay.

What the video does not show is more ... Playing drone pilots in beautiful landscapes in broad daylight is one thing. To orient oneself overnight on a desert island is another.

With the other two girls and one of the guys, we left the other boys at the top of the hill with their equipment, because they wanted to stay photographing the sumptuous night sky (I put you above a photo posted on Facebook by Christoph).

Due to poor trail selection, our panoramic climb turned into an endless junglesque expedition on the way back down... Yes, Indiana Jones style, in impassable brush - in shorts, canvas sneakers and flip-flops, of course - by the glow of two headlamps and an iPhone loupiot!

I've renamed us "Adventurers of the Lost Trail"... 😂

We ended up succeeding in reaching the beach, without breakage. Fortunately there were no dragons on this island & #8230; We would probably have been less intrepid.