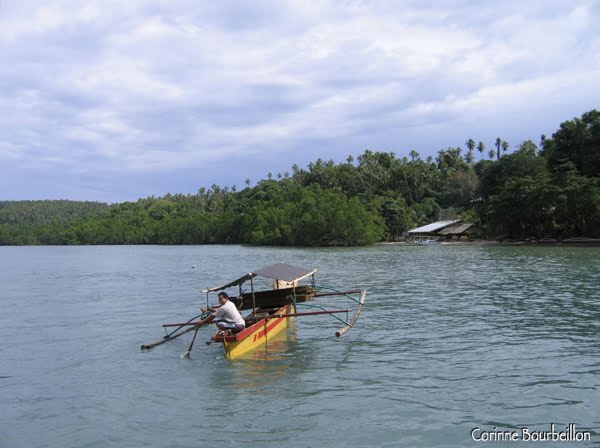 Arrival in Sulawesi: heading for Bunaken!

Through the porthole of the plane, I discover Sulawesi, and the island of Bunaken, where I will spend the first five days. Arriving a creepy hair: it is nice over the bay, but a big rainy cloud settled on the airport of Manado.

The pilot tries a first approach. It is a little too much, to my taste, two mountains covered with jungle, before entering a mashed gray pea.

Then the plane rises, goes up at once, out of the cloud and leaves for a large circle on the sun side, over the sea and the islands that form the Bunaken National Marine Park. Before returning to the storm cloud, for a second attempt.

The pilot will repeat the maneuver two or three times, after we have courteously announced that the visibility was really too rotten over the track ... Bigre.

Ace, that pilot! We finally landed, nice and easy, in the pouring rain. A relief for everyone. All around me, the tight faces relax.

After, it's easy. I pay my 25 USD visa for 30 days, clear the customs, get my bags and find as expected, with his little sign, the guy from Froggies (Bunaken dive center with whom I contacted by e-mail before departure), in the crowd watching the passengers at the exit.

It's hot and sweaty. The rain has stopped. A swarm of kids armed with huge rainbow umbrellas continue to rush out of the airport compound to catch a taxi. Drivers are ruthlessly chasing the kids away. It doesn't help!

Crossing by car from Manado, big city concreted without grace, but very animated. Then an hour's boat ride Bunaken.

The boat in question is actually the one that supplies Froggies in food and especially in water. The profile of the coast and islands is steep, volcanic, covered with dense and exuberant tropical vegetation.

I am warmly welcomed on arrival at Pantai Liang, the west beach of the island, by Christiane. Franco-Italian, polyglot, she constituted the diving center Froggies 15 years ago, with Indonesian staff, and trained herself the guides who accompany us underwater. She always has a lot of incredible stories and funny stories to tell, in the evening, when guests meet around the table for dinner.

At my request, she arranged for me Nyiur Melambai, a homestay neighbor, or nights (120 000 Rp, or nearly 10 €) are cheaper than at home Froggies. I will also take breakfast and dinner, included in the price. Copious but monotonous dinners: rice and grilled fish on the menu every evening, with some variations, sometimes, in the assortment of vegetables (beans or spinach, spinach or beans). Feel like a change? Just alternate between a bottle of ketchup and a bottle of chili sauce... Hum! Luckily, I'll make up for lunch with the great buffets of Froggies.

Tonight, I'm the only customer of the huge restaurant Nyiur Melambaiinstalled under a large sheet metal roof on the sand.

Here, as at TiomanIn Malaysia, the coral reef becomes mangrove in places on the beach: trees grow in the sea.

Peaceful family atmosphere in my guesthouse. Two charming old ladies run the restaurant, helped by a bunch of other people who must be from the same family. Everybody is looking after me, smiling at me, because they can't really talk to each other. Only one young guy (a nephew, a cousin, a grandson?) is gibbering a few words of English.

After the rice-fish, I go home Froggies, just around the corner, getting to know the other divers. Tonight, it's party time: some customers brought Christiane some cheese, and I'm not the only one who thought of bringing a bottle of wine.

The meal ends so cheerfully, in the French, under the benevolent smiles of a couple of Australians, Jeane and Bert, who taste politely french cheese... with much less greed than Christiane.

The atmosphere is assured by the Indonesian staff, resort staff and guides, who push the ditty, accompanied by guitars and percussion various. Songs of the traditional local repertoire, sometimes with almost Oceanian accents. In these latitudes, in the sea of Celebeswe are not so far from the Pacific ...

Every night, we will be entitled to this little concert very nice. It's not just for folklore. I will see, during the days to come, that all the locals love to sing, at any time, on the boat, in the village, fishing, during their activities of the day ...

I'm exhausted and I'm going home early to my bungalow to recover from this long trip. Spartan comfort: bed, fan, mandi (water tank and bowl with which one sprays oneself to wash oneself). Go to bed! Tomorrow, I'm diving on the famous Bunaken drop-off.