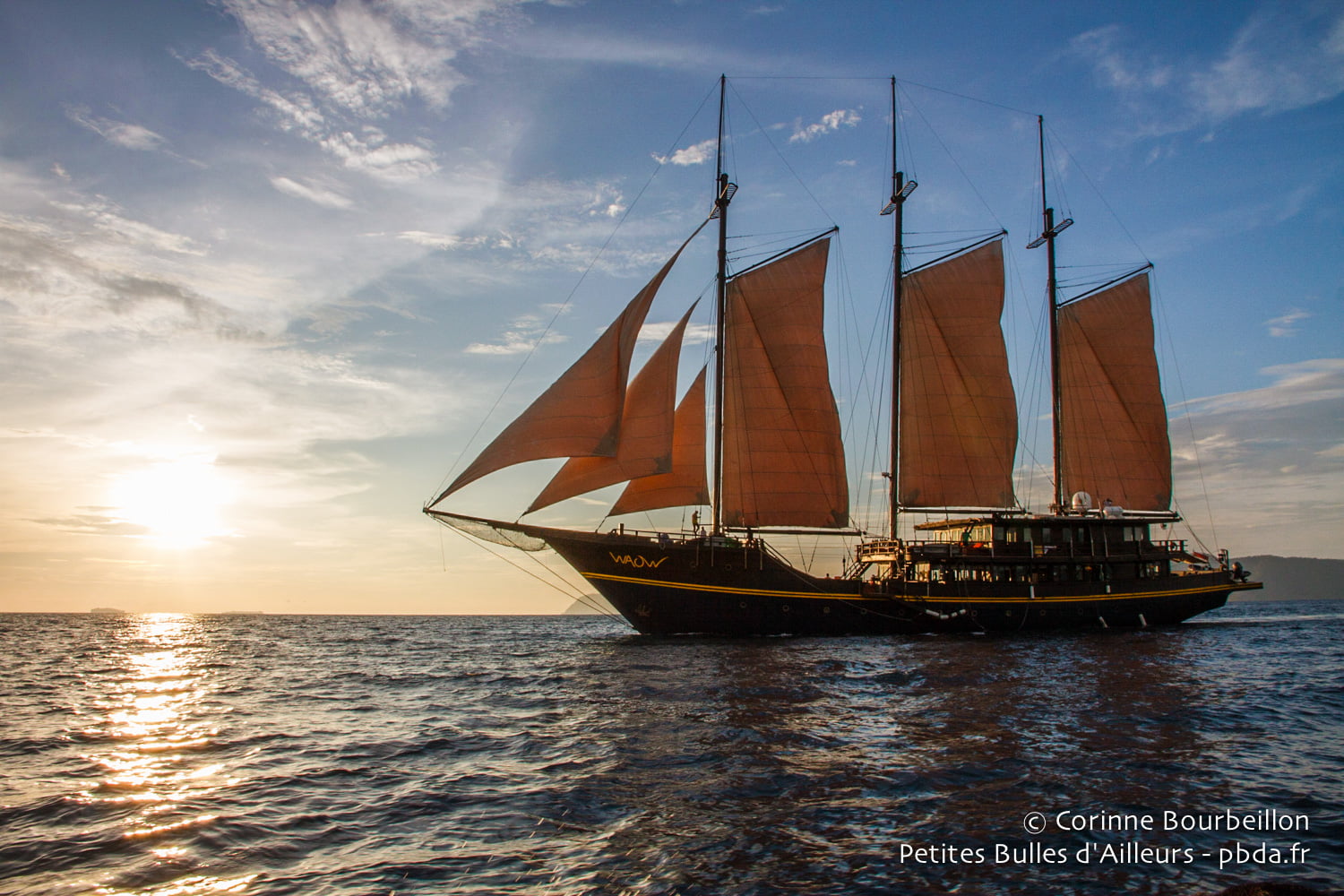 The sun will soon disappear on the horizon.

Heave high! I'm taking you back to Raja Ampat, on the most beautiful dive cruise ship, all sails out. The WaowThere is no need to say, he is aptly named ...

To hoist the sails to Raja Ampat

November 5, 2015. I am on board of Waow for a week. After the Banda Sea, we are now sailing between the Raja Ampat islands. Luxury, calm and voluptuousness…

In this month of November, it's not Christmas yet, but for me it's just like... That afternoon, after the day's dives, I run from one end to the other of the magnificent three-masted ship, my camera in hand, with the excitement of a child at the foot of the tree. Because today we hoist the sails!!!

I mean, "we"... it's the crew guys who stick to it. First, they start by climbing everywhere, on the rigging, the bowsprit, the yardsticks... I don't want to lose a crumb of the manoeuvre. With my head tilted back, I watch their progress up the masts. It's high, all the same... The summit is more than 40m high!

This time it's done. The engine's off. The three-masted ship is a real sailboat again! The wind slams the canvas, the noise is impressive. These dizzying sails unfurl and inflate, elegantly, above our heads.

Cannot fit them into the camera viewfinder frame. But how beautiful, how beautiful !!! I feel like becoming a pirate princess, a great explorer of the oceans - me who loves being on or under water, but knows little or nothing about sailing and sailing boats... 😆 (Note that I am one of the lazy ones who, under the pretext of taking pictures, just admire the crew's efforts).

The Waow on parade

We're no longer making very fast headway, with just the right amount of wind to propel this huge 60m three-masted ship. So we sail peacefully, until the sun tilts its course on the horizon...

But it's almost time for the highlight of the show. We board the tenders to admire the boat from the outside. She looks great, with her sails, "my" princess boat!

Let's get loose with the cameras. Well, me, mostly... port side, starboard side. We turn around the ship to photograph it from all angles in the changing light of dusk.

A distant grey cloud suddenly turns yellow. Nature spoils us. An impromptu rainbow rises above the three-masted ship and soon a sumptuous sunset adorns the sails with fifty shades of gold... Magnificent !! !

Setting sail, really, there's nothing more exhilarating in the world! Literally and figuratively. The image of a sailboat on the horizon is enough to make you want to go elsewhere.

At the time I publish this post, I returned to Brittany since long weeks already. And at the beginning of the year 2016, I feel again torn by the desire to leave again, to set sail again ... It seems to me that I will never be satiated with seas and distant horizons.