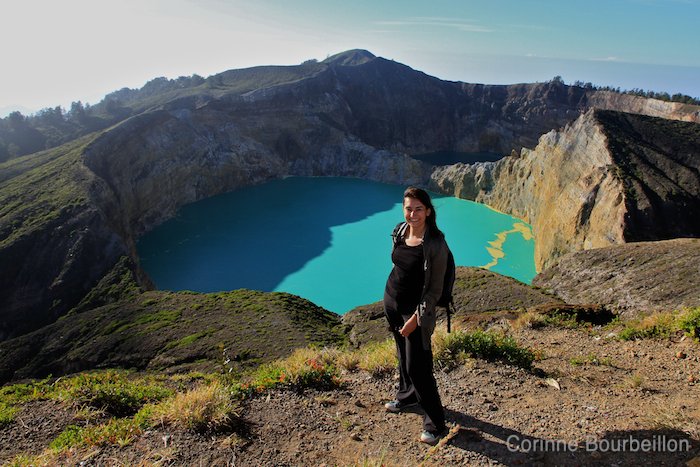 Kelimutu, the volcano to the spirits

"And how long does it take to walk to see the Kelimutu? "No, 10-15 minutes, tops. » I am wary of Indonesian minutes, often elastic.

But Matheus Misir, my guide-driver in Flores, says true. The spectacular Kelimutu volcano, with its three craters, which form giant pools for three lakes with strange colors, is an easy ride.

The "snake road" of Flores

In fact, most of the journey is by car. The Kelimutu is roughly half an hour's drive from the small village of Moni, where we spent the night. A small winding road that climbs, climbs ...

Anyway, wherever you go to Flores, the road is permanently a "snake-road"as my driver says. A "snake-road" that unrolls fabulous landscapes of rice fields and volcanic reliefs at every bend. Sometimes vertiginous, always splendid... 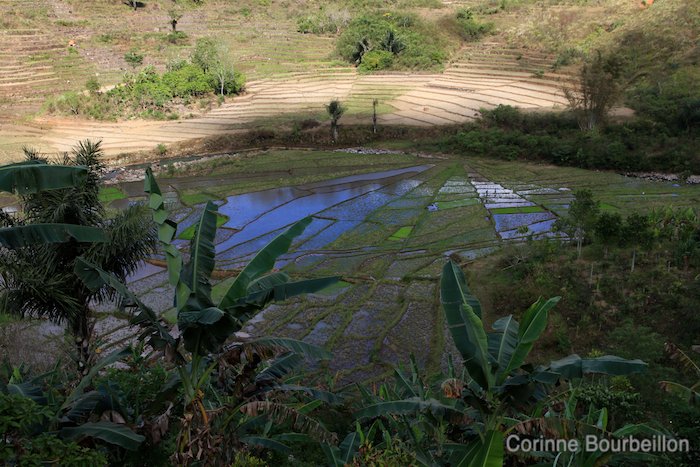 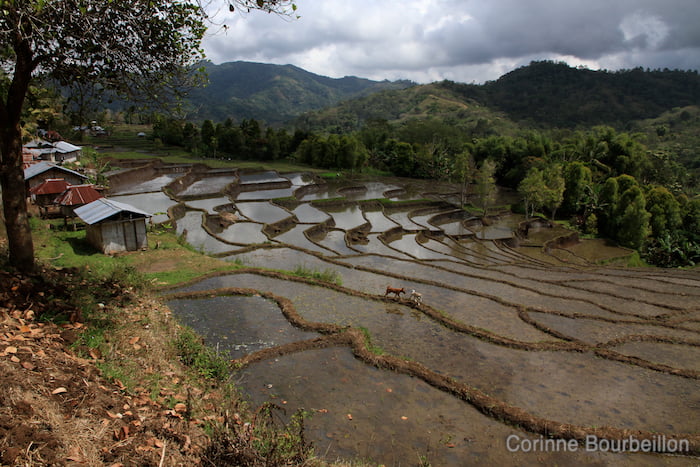 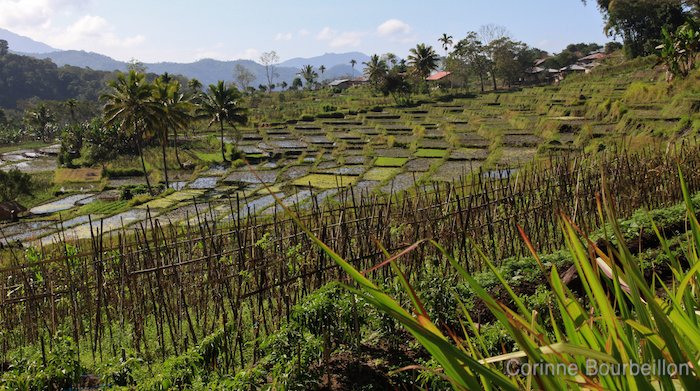 I wouldn't have made this trip in bemo, those local mini-buses overloaded with goods and passengers... All along this crossing from east to west, from Maumere to Labuan Bajo, I enjoyed the comfort of my private car: shocks in good condition and air conditioning. It's no luxury on this asphalt snake in perpetual work. Besides, I can ask Misir to stop whenever I want, to take pictures.

I also very much appreciate his driving safely. From the start, he asks me nicely if it's okay, if his behavior suits me.

Yes Yes, "bagus", it's good. Given the unexpected obstacles on the road - poultry, cows, children, rocks, motorcycles, broken bemos, potholes - I find it nickel that he drives quietly, "pelan-pelan".

With Misir, I'm going to practice my Bahasa Indonesia for four days!

As we climb towards the Kelimutu, turn after turn, I watch the shreds of cloud still hanging on top. The sun has just risen.

Kelimutu is beautiful, as long as you don't end up in the fog. The summit is 1,639 metres high. When the volcano is in the clouds, everything is grey, there is nothing to see! But we're lucky. Today, as we arrive, it's the big blue above our heads. The fog scarves are slowly tearing.

A few curves later, we see a little lady waving at us on the side of the road, crammed into a big jacket - it's cool in the heights. She asks if we can take her up to Kelimutu Park. I wave: "Tidak apa apa", no problem. Misir is happy, he can chat in Indonesian with our hitchhiker.

She put a big ball beside her in the back seat. of the ikat, carefully folded and stacked, that she will try to sell to tourists in the parking lot of the park.

A few Indonesian minutes later, here we are. Admission ticket bought at the ticket office, car parked in the parking lot. What? Another 50,000 rupees for the camera? Damn, I should have hidden my 7D... 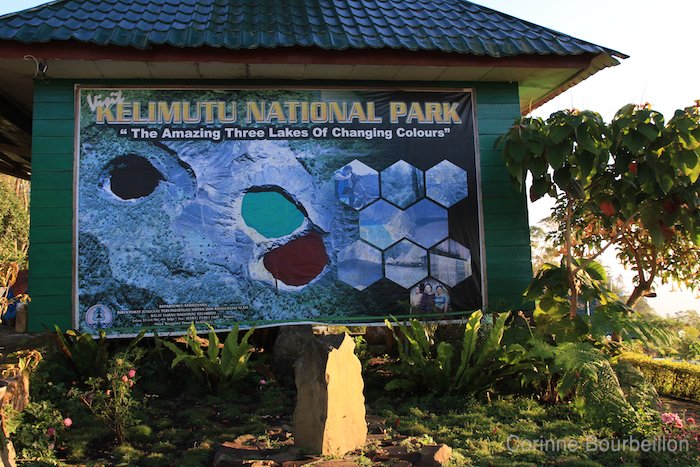 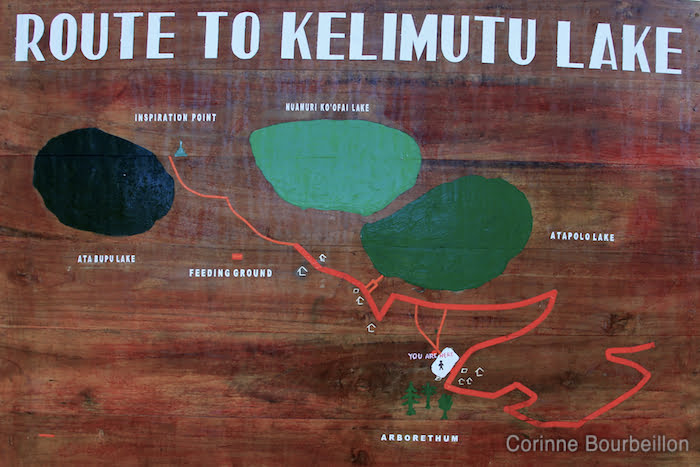 Misir accompanies me to the first lake. He was right, it's easy: a path with steps, going up a gentle slope. Then flat ground, by a shady path, which leads, on the right, to the first point of view on the Kelimutu craters. 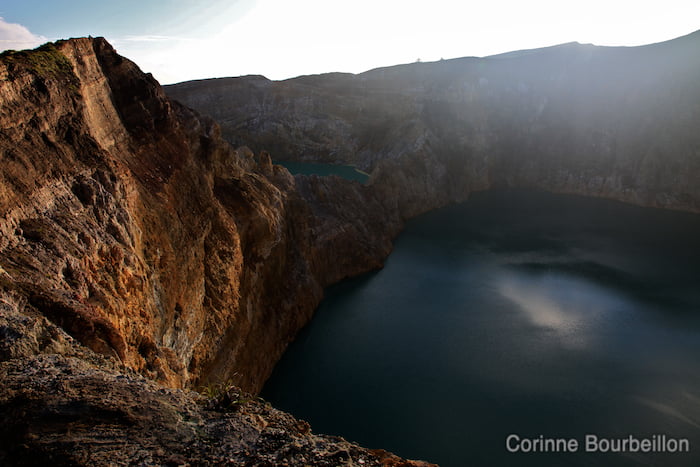 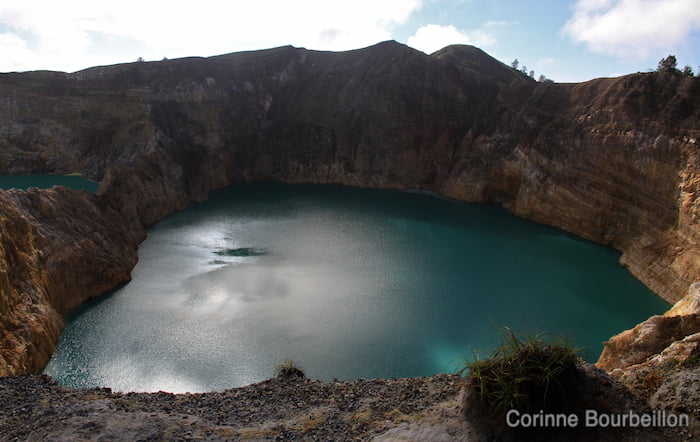 I have the sun in front, not great for photos, but no matter ... I open my eyes, it's worth all the pictures of the world. A thin rampart of jagged stone separates the two lakes.

The lake on the right, on the pictures above, is called Ata Polo. It can take a red-brown color. For now, it is rather dark blue-green.

The one on the left (which I will discover better after, while gaining height) is Lake Nuamuri Ko'ofai. When I arrive, the sun does not illuminate it yet. In full light, it turns to acid green, almost fluo.

The place is popular. Locals also come here on excursions. They greet me nicely: "Hello!" I answer Pagi! » And I might add: "Saya orang perancis"because everyone wants to know where I come from ... guaranteed success. 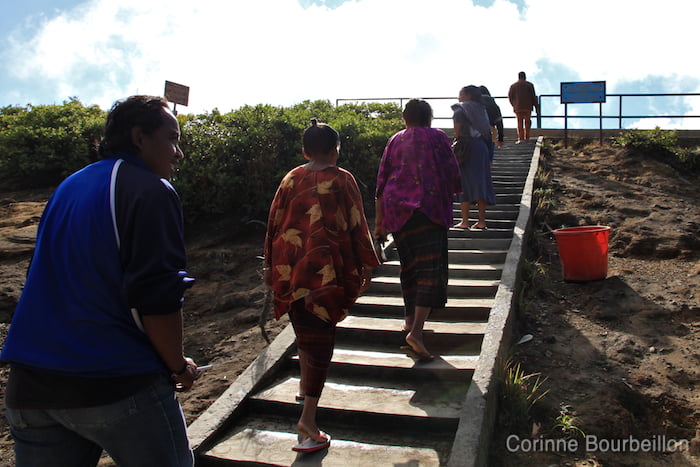 But yes, yes, sir, I speak the Bahasa Indonesia ! Well just a little, what, "setikit." I'm not going to sit there talking to you for hours, telling you my life, telling you if I'm traveling alone or in a group, whether I'm married or not, and how many children I have, because that there is the green lake and the black lake waiting for me up there, see you, so goodbye and see you soon maybe ...

Pfff. No way to quietly admire the view in silence, in this country ...

The lakes of the spirits

Afterwards, to really enjoy the show, you have to climb to the aptly named Inspiration Point. An eminence, at the top of a staircase, which allows to glance at the three craters. 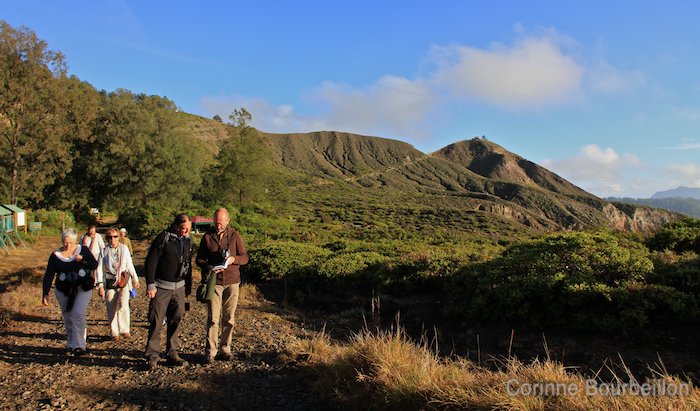 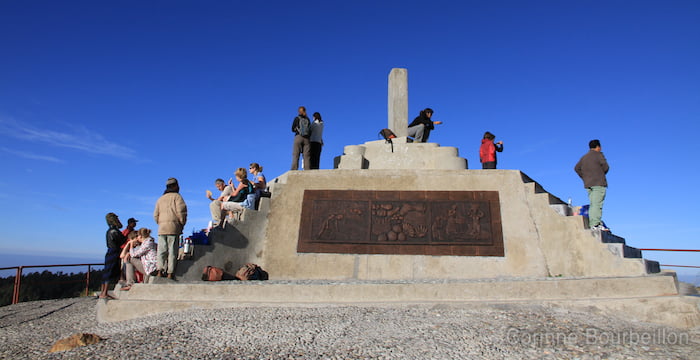 There, Misir lets me go up alone. He prefers to go back to the parking lot, chat with his colleagues. I attack the climb, enthusiastic. Walking after walking, the panorama becomes even more grandiose. 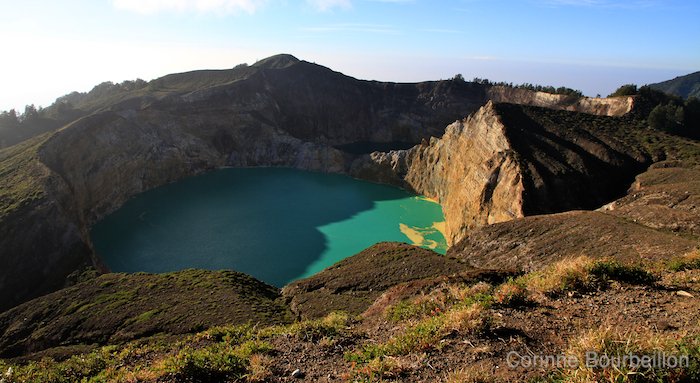 I did well not to come too soon. Many tourists come here shortly before 6 am, for the sunrise. Except at this hour, there is mist everywhere and the lakes are still in the shadows.

It certainly has its charm too, the shreds of mist over the craters, but I tell myself that it is not a bad choice to arrive a little later in the morning ... The surface of the green lake filled with sulfur lights up as the sun goes up in the sky. Its color, an intense turquoise green, seems almost supernatural.

On the other side of Inspiration Point, there is the third lake, the black lake, Ata Mbupu. Again, I'm lucky. It is often hidden under a cloud of opaque clouds. But these fray gradually under my eyes. We end up seeing the whitish cliff of the crater fringed with greenery reflected in the ink of the water. Amazing. 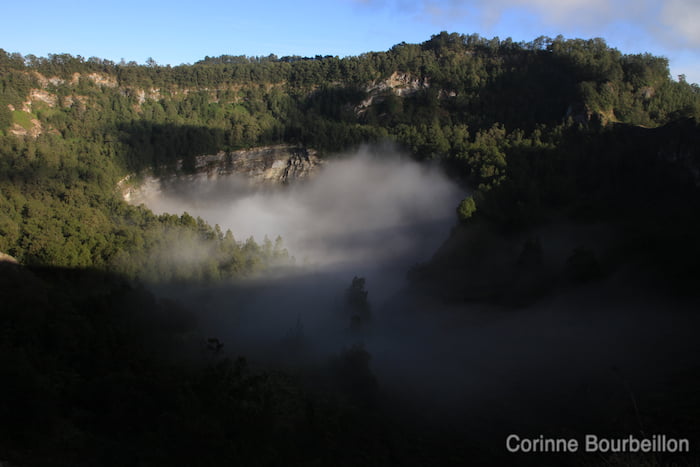 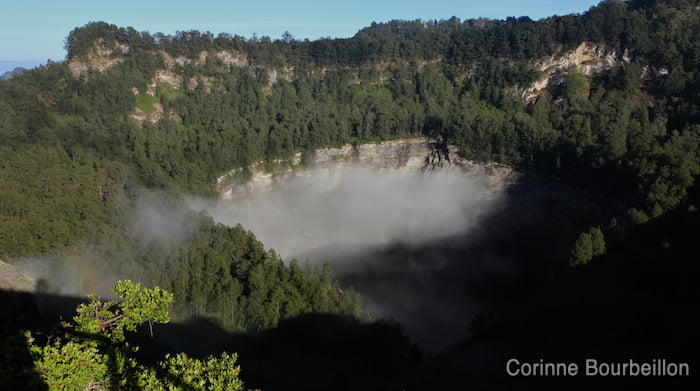 The place is sacred, for the people of the region. The three lakes are populated by spirits. There is a lake where the spirits of young people go, another for the elderly, and the third lake, evil or magical, would welcome evil spirits (for what I understand explanations that were given to me ).

I turn around to watch the evolution of the acidic green lake. The sun is higher in the sky. The color of the water is even more violent than before. I redo some images, watching from the corner of my eye the clouds that I see appearing on the horizon. 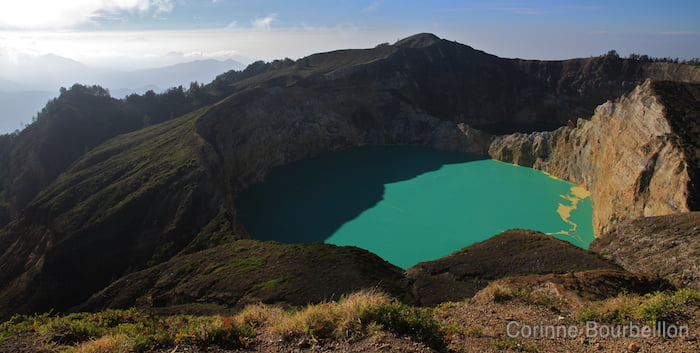 This is really the most beautiful. The lake that welcomes the minds of young people, if I'm not mistaken.

And, as a good tourist, I sacrifice to the photo-souvenir ritual in front of the crater, before leaving ...

Magical, this little excursion to Kelimutu ... Really. I display a smug smile on my way back to the car. "Saya senang! » I say to Misir, who smiles indulgently at my efforts to speak his language.

To learn more about this strange volcano, some explanations at the end of these two links:
→ Wikipedia: Kelimutu Volcano
→ Activolcans: Kelimutu