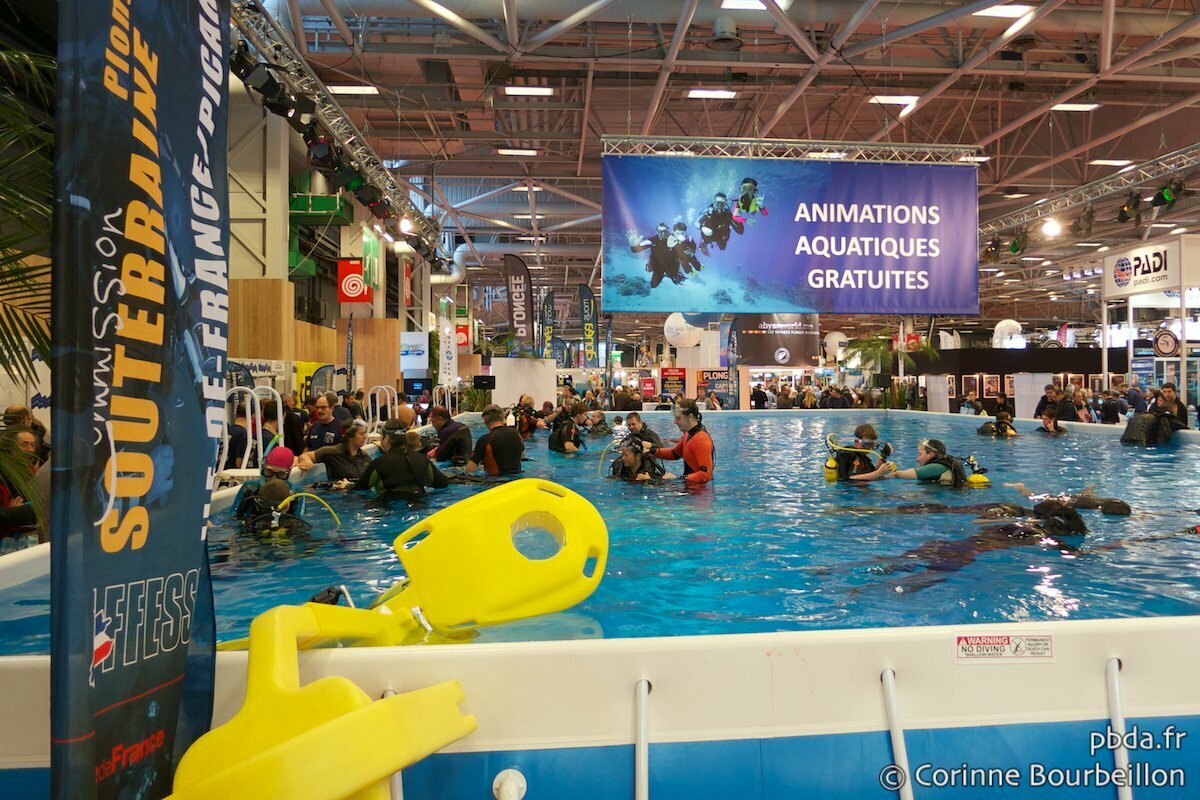 The 2013 diving show was held from January 11 to 13, Porte de Versailles, in Paris. The real pleasure is to meet a lot of diving friends there!

the Diving Salonwe meet flying dolphins and humans breathing underwater. We swoon in front of the latest models of combis and stabs with pink or mauve for girls. We fill the ears of Japanese folklore or Breton. Manta rays and cardboard hammerhead sharks are photographed.

I give you in bulk below a few photos made with the iPhone at random of my peregrinations in the alleys of the living room ... 😉 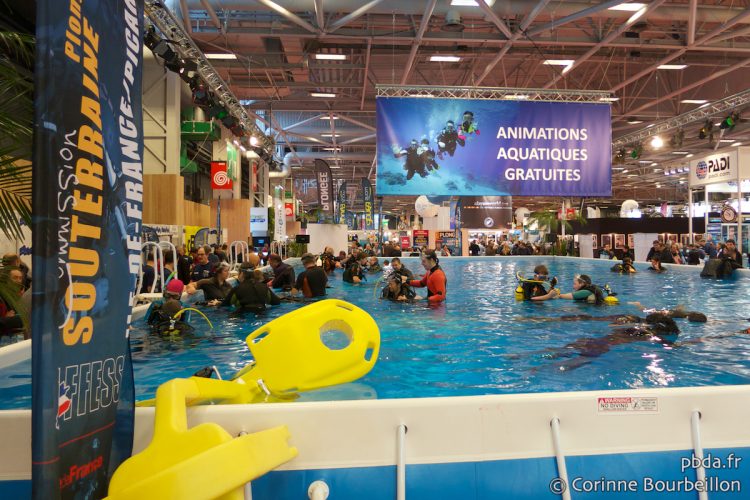 But most of all, what I loved at the diving show was to find lots of nice people, divers friends met on a trip and I had not had the opportunity to see since ... A real pleasure. Facebook is, in this respect, a fantastic tool for keeping in touch with travel meetings.

So I spent the day chatting right and left, leaving some stands and animations, I admit.

I had the great pleasure of meeting Sabrina, my super buddy, whom I had not seen since our dives in Sipadan in 2006 !!! She now lives in Vilanculos, Mozambique, where she holds the center Odyssea Dive, with his companion, Denis.

It's been years that I promise to go see them, but my periods of holidays never really fall well compared to the ideal season there ... In short, Mozambique is more than ever on my "to-do list", after this beautiful evening we spent together, to make up for lost time, to cause travel and diving, sharks and manta rays ...

I also met Philippine and Arnaud, a young couple of divers with whom I had sympathized in Alor, in July 2012. Arnaud had the misfortune to drown his SLR, a 7D, the same device as me, because of a badly closed box. Fortunately he was able to get a new camera for the rest of their trip ... They came to the show looking for new flippers. The ones they had did not resist furious currents!

After exchanging messages via Facebook, another pair of divers, Nicolas and Mathilde, met in Lembeh, North Sulawesi, in 2010who locate me in the crowd and come to join me. We exchange news, we tell our last trips, we chat, we chat. Their next destination: Oman. More for the "earthly" side they tell me, but we can also dive a little there. They will tell me!

Other reunions, which gave me great pleasure, with Marco Delecluse from the center Y Aka Diving in Rangiroa, Polynesia. I was in Rangiroa in October 2012 (and I am very late in my story, I have so far posted only two articles on this trip). I am still happy to have opted for this nice little center on a human scale: very nice atmosphere, organization of the nickel dives, and special attention to photographers sub, like me ...

In short, seeing the great smile of Marco, I almost felt like he left for only a few days! Of course, I now want to go back there to dive with the dolphins and the sharks, and to savor again the softness of the Polynesian air, in the middle of the immense Pacific Ocean ...

I also went to see the merry band of Forum of the photo-sub on the stand of Researchers of water (where we do not find that water), just to snap the wind to Thierry Rolland and to drink with those who had come to have a drink. Thierry is the forum, which I highly recommend to go for a ride, if you are looking for advice for the picture underwater, it's a mine of info. He had organized the stay in the Red Sea, in Hamata, in November 2011, which I attended with a dozen other passionate diving-photographers ... I still have a fond memory of our meeting with the dolphins of Sataya.

Finally, I managed to exchange a few words with Francis Le Guen, very busy with many appointments and book signings from his book narcosis. You don't realize it, but signing books non-stop at the Dive Show is very physical (more than diving, more than tennis): you come out of it washed out and your arm hurts! 😆 One thing is sure: new books are in preparation in the "Carnets de plongée" collection at Glénat. To be continued...

I'm very happy to have also put a face on names or nicks, among those of you who leave me comments here, on the Little Bubbles Elsewhere. I remake a little hello to Didier, who will recognize, and I am delighted to have met through the show!

Finally, I greet all the others who contacted me via Twitter or Facebook, and that I missed - not there the same day, already gone, or not yet arrived. I hope you have found inspiration for future trips to the show, that you already have desires, and maybe even plans for departures ...

For my part, I prepare a new stay in Indonesia in March ... I'll tell you more soon, the time to finalize all that. And then, I have not finished telling my last trips, to Raja Ampat and in French Polynesia. New articles are coming soon !!!