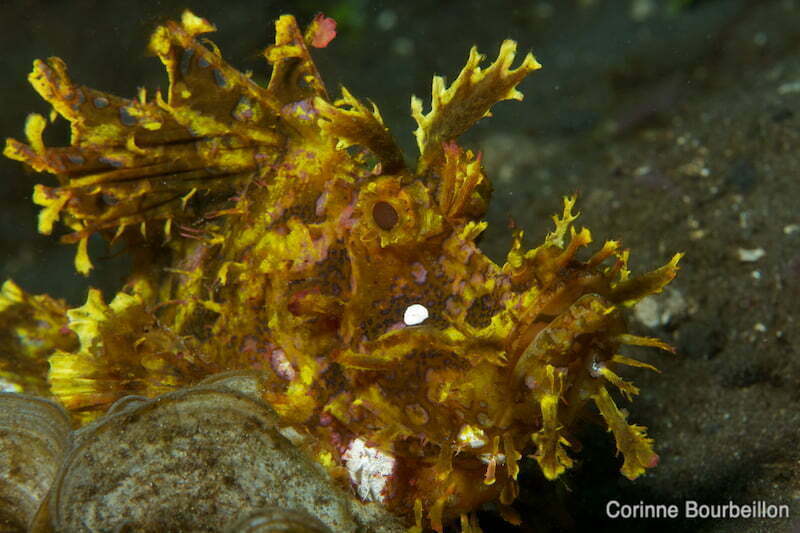 Underwater, we do not look only in the blue. In the archipelago of Alorin Indonesia, it is by scrutinizing the bottom that we find treasures.

How about a little Muck-dive?

In diver's jargon, we call it "muck-dive": literally, "muddy dive". Muddy diving is quiet diving, at the bottom, which consists of scanning the sand, coral debris and algae clusters, in search of strange treasures: fish that pretend to be plants, slugs full of gills, transforming crabs...

It is a captivating game of patience, where one tries to find a whole lot of strange creatures, often very talented to be confused with the environment.

My first day of diving Alor is devoted to "muck" sites. No hesitation as for the choice of lens: macro, of course! To photograph small animals...

The two sites we explore that day are incredibly rich. I go back enchanted.

You will find all the curiosities you could hope for: leaf fish, ghost pipefish, orangutan crab, toad fish and of course a nice collection of nudibranchs, those little colourful underwater slugs, which fascinate sub...

Nothing new for me - still the "spoiled diver" syndrome - but it's impossible to be jaded when there's so much to see below the surface.

And above all, it's the perfect opportunity to take back my my 7D…

It's flashing in Alor's waters!

Anyway, I'm just too happy to be underwater again. To be able to indulge without restraint in this strange hobby, which has become a real passion over the years: photographing fish... I even have a friend who laughs at me nicely because of it.

There must be more sexy, like hobby. But hey, I find it madly more exhilarating than jogging, shopping or pool lengths. Each his own.

Immersed in the waters of Alor, I savor my happiness ...

For a few minutes, I'm a little cuttlefish on the prowl. Not really frightened by my presence, she lets me approach her. She'll even show me her tongue, right when I flash! 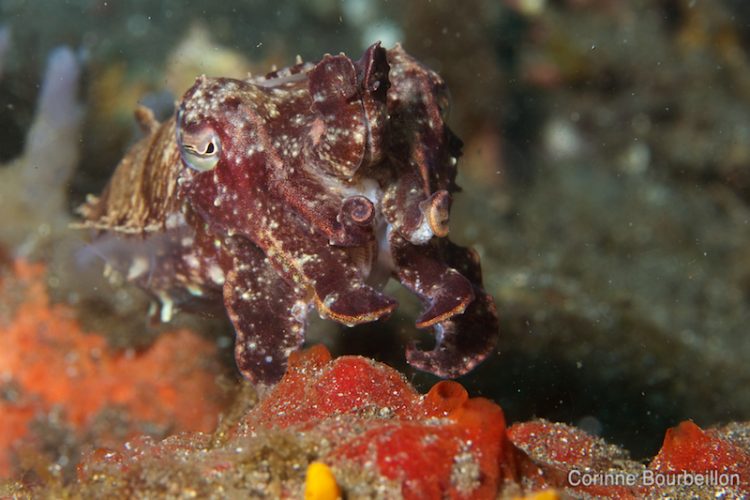 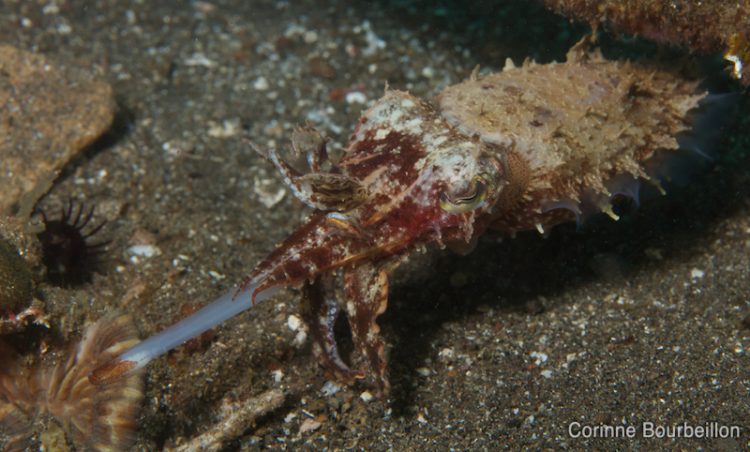 A horned-boxed fish stares at me with its big round eyes, as if stunned. I'm flashing.

Then I try, somehow, to fit as close as possible a tiny pink crab, stuck on a branch of soft coral. Re-flash. 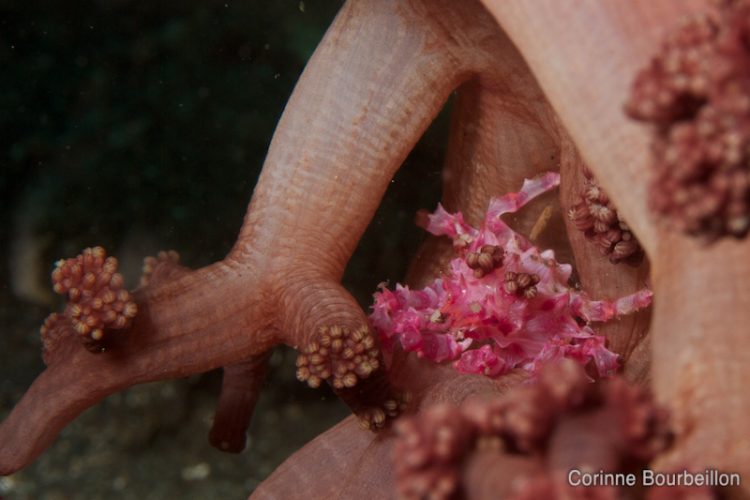 Ah! A toadfish... Let's go. The good thing about this one is that he wants you to think he's a sponge. So it's not moving.

He hardly knows how to swim. His fins have almost become paws, on which he remains stalled, unmoved, watching his prey. 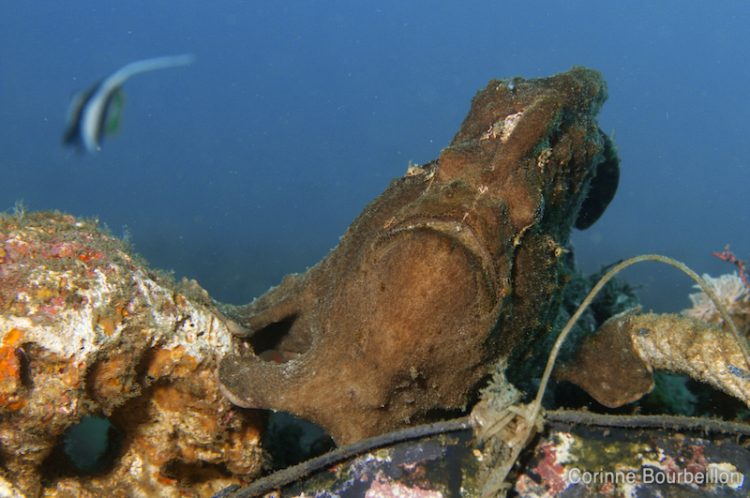 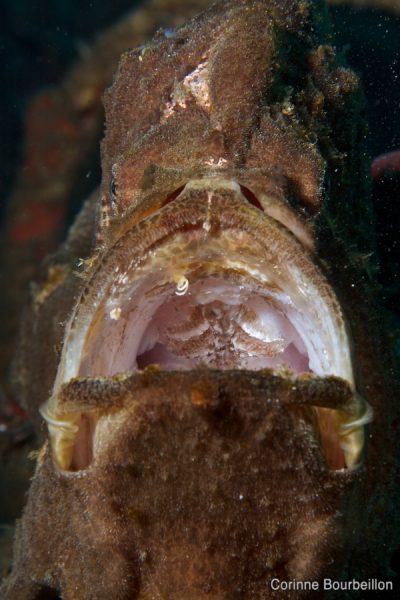 Coup de bol. This big fish-toad that I photograph from every angle deign suddenly open the mouth when I trigger, not at all impressed by my photographic devotion.

I draw him the portrait endlessly. But I'm not the only one of the team to devote myself to this funny hunt for the little monsters underwater ...

Gilles, the boss ofAlor Diversdoes underwater photography, too. Matheus, a Slovenian also equipped with a 7D and whose last day of diving is the last one, is like me absorbed by the incredible fauna which populates the place. And Carole - my diving buddy during this stay in Alor - came with her compact.

Arnaud, one of our diving companions, will not benefit with the same happiness as us. Sub photographer, too, he has the misfortune to drown his camera - a 7D, again - at the first immersion. Ouch. It's calm.

(I promised not to post here the picture of the drowned man and his owner, whom I sneaked on the boat, after the dive, but I let you imagine the head that Arnaud was doing, when the rest the team has returned to the boat, still unaware of the tragedy ...)

When we learn what happened, we all sympathize, necessarily.

The cause of the drowning: a bad manipulation with the latches of closing of its Nauticam housing. The water entered as soon as the dive started. He got back on the boat as soon as he realised this, but without being able to save anything.

This is not the first time I have witnessed this kind of incident and I hope I never experience the same disaster with my own box, a Ikelite, deemed more fragile. I have had it for a little over two years now and I take great care of it. I always prepare it the night before, without haste, inspecting the joints twice rather than one. So far, no problem. I cross my fingers to make it last.

Well, I kept the best of the treasure hunt for the end ...

A rhinopias otherwise nothing

I am very happy to have crossed all the charming creatures that I showed you above. But I'm even happier to have been able to shoot two other things ... 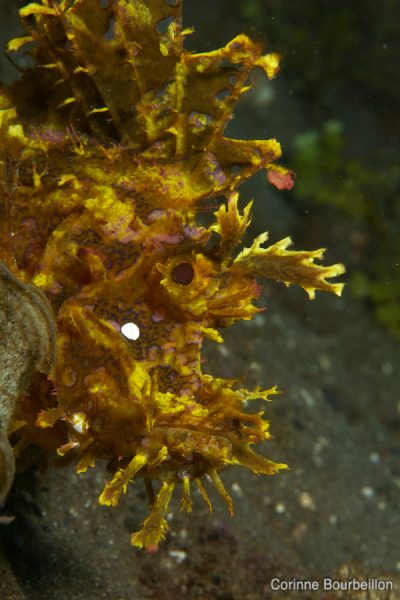 First of all, a magnificent yellow rhinopias - that funny fish with a mouth vaguely reminiscent of a rhinoceros profile. Isn't it magnificent? Really, I love this fish !!!

I had already seen some in Lembeh, as well as in Pulau Weh - other places famous for the "muck-dive" - but with other colors, mauve (my favorite color) and red-orange... I give you some links below:

The encounter with a rhinopias is rare, and therefore precious. The photographers of our small group, disciplined, succeed one another in front of the beast to draw its portrait. Cooperative, the rhinopias doesn't act shy and poses without seeming too disturbed by our flashes that follow one another... It's really a nice fish! 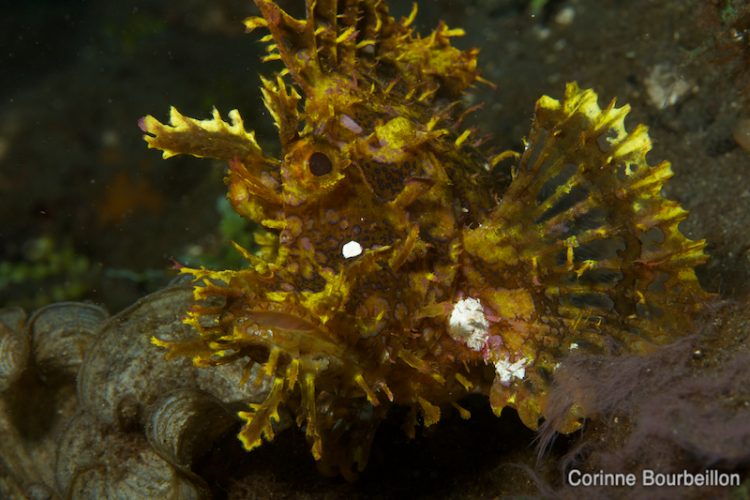 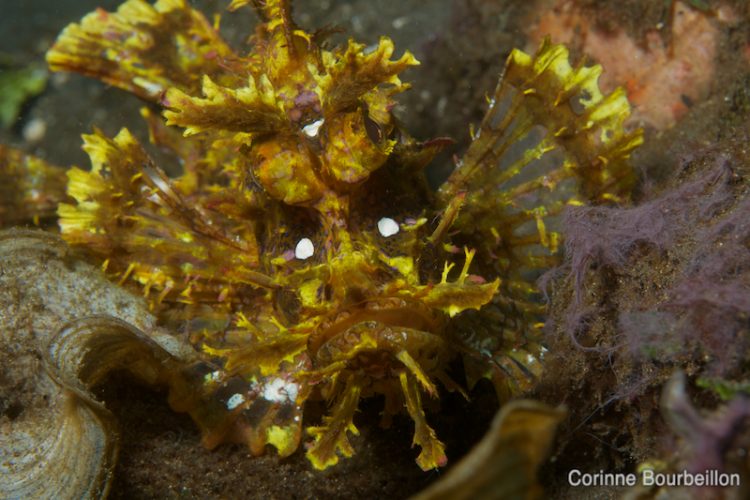 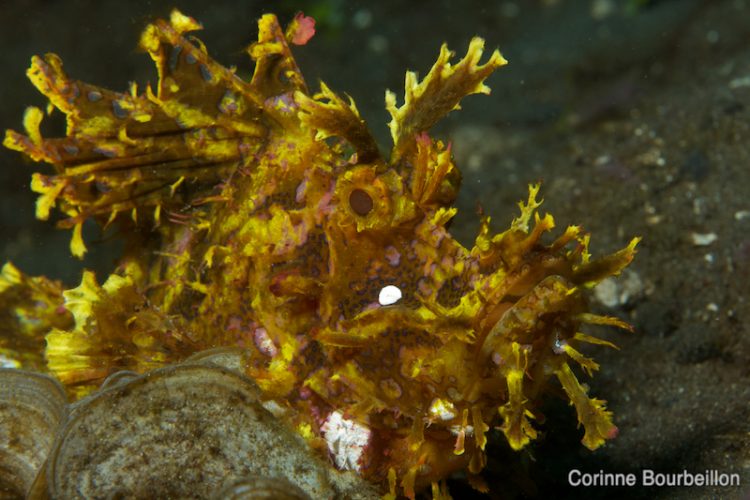 He is so small that he could fit in the palm of his hand. But better to avoid touching it. Cute as it is, this mini octopus has a neurotoxic venom able to kill a human being.

I had only had the opportunity to admire this tiny octopus once before, I think it was in 2010, in Lembeh:

During this dive in Alor, we are three photographers - Gilles, Matheus and me - to turn around him, fascinated. This is the end of the dive and we continue to follow the tiny octopus, which takes us to shallow depth, to within a meter or two of water barely.

It does not hold in place, constantly changes color and shape, turning from dull brown to bright yellow, bringing out its electric blue rings.

Sometimes, he sees his reflection in the window of my box and his reaction is then to go straight to it !!!

Not the kind to gently take the pose like a toad fish or a rhinopias ... 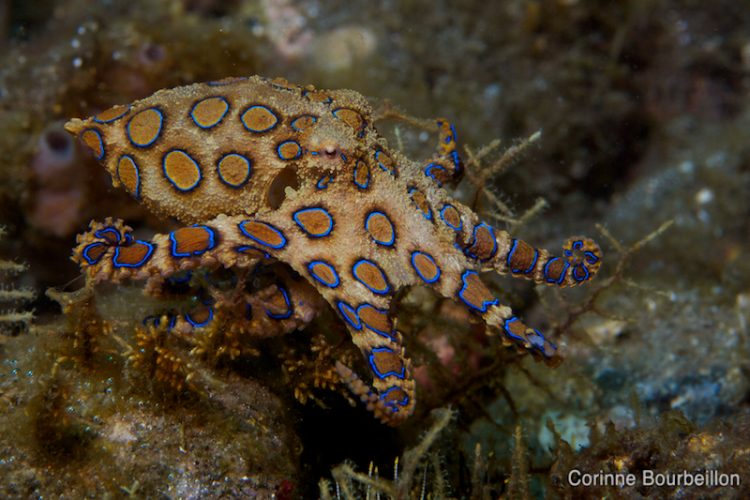 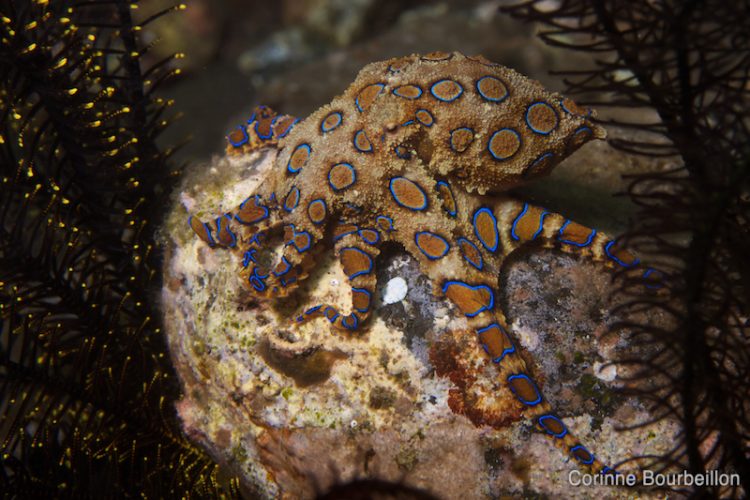 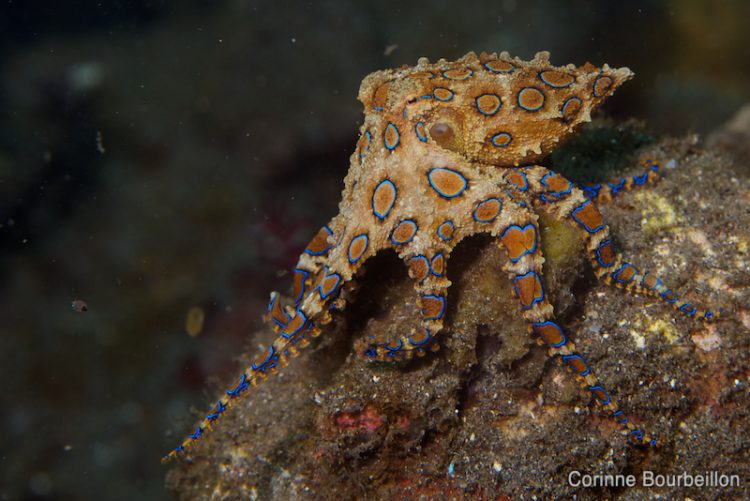 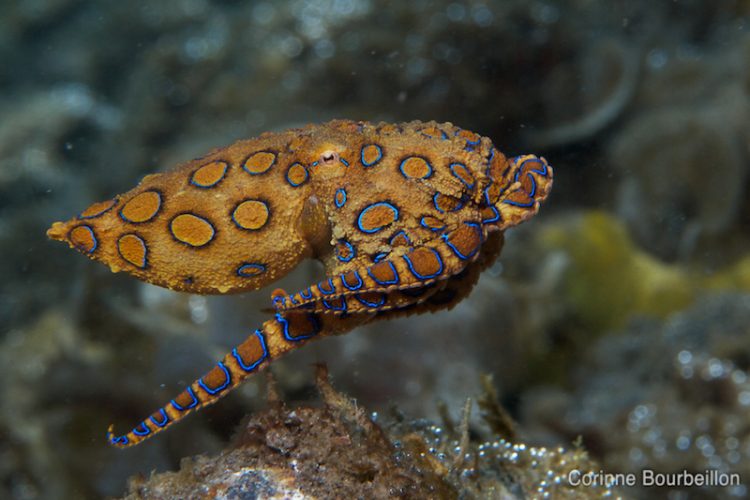 Finally, the blue-ringed octopus took, for a brief moment, this strange posture in front of my lens: two tentacles resting on the bottom, with his head turned towards me. One almost has the impression that he is standing on two small legs, arms crossed, as if to challenge me... Amazing! 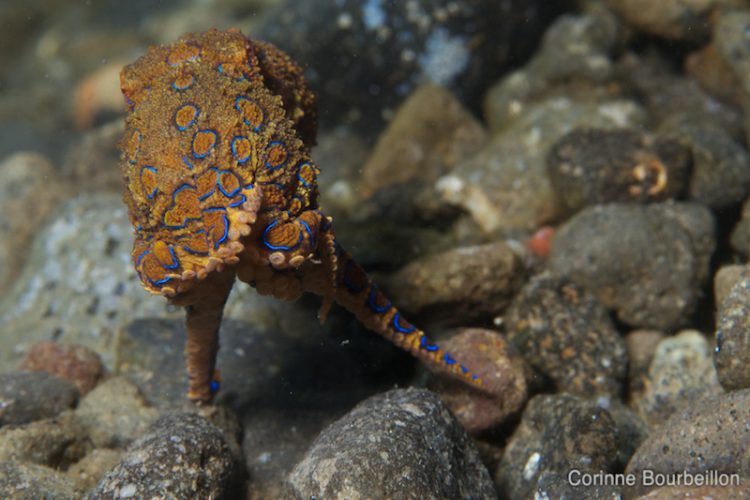 I do not know why all these creatures fascinate me so much. Why the inventiveness of underwater nature captivates me so much ...

The main thing is that I continue to marvel!