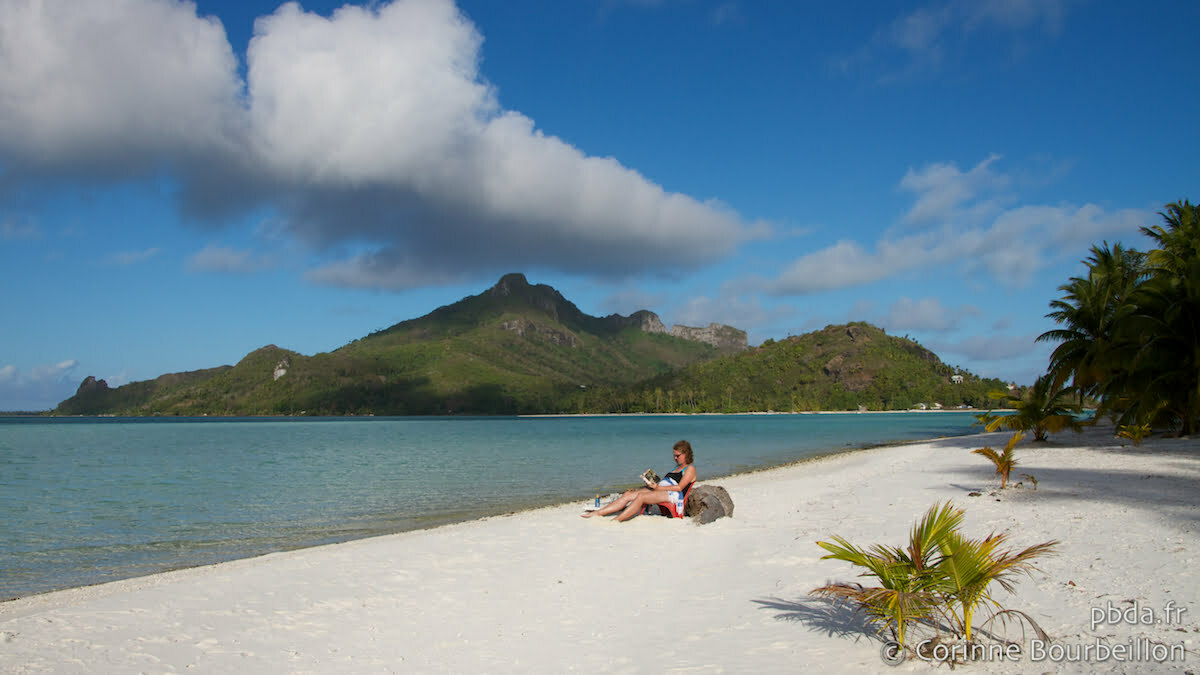 Living on A Motu in Maupiti

When it's cold and gray, I remember Maupiti. I see the light again, the lagoon, the ocean... Come on, hop! We're going back to Polynesia.

Landing between the ocean and the lagoon

The island of Maupiti, my girlfriend "globe-trotter" Marie, who runs the blog Further...has already mentioned it here:
→  I entered a postcard in Maupiti

As for me, I had already put a few pictures in a very first post there:
→ Pacific Blue

But for the rest, I'm very, very late in my stories ...  My trip to Polynesiaand our stay on this small island of the Society Archipelago, dates from October 2012! 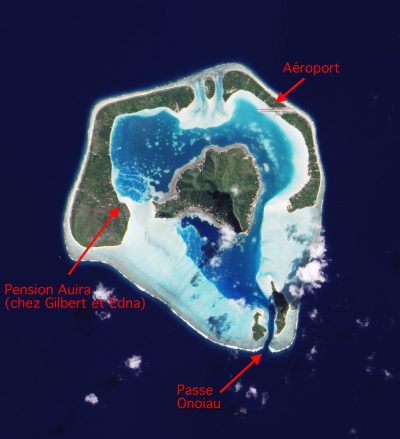 Maupiti is an island-mountain similar to the famous Bora Bora, its neighbor, located a few kilometers away. But in smaller, and more authentic.

No luxury hotels on stilts in Maupiti. The inhabitants - about 1,300 - did not want it. To welcome tourists, there are only pensions.

We will stay for five days at the Auira pension, on the Motu the same name, opposite the airport, the adorable Gilbert and Edna. It was one of the few places where there was room ... Maupiti is not very touristy, but it is better to go ahead to book the accommodation of your choice.

My porthole gives ocean side, at the time of landing. I miss the view of the island. But I see very well how to approach motus, these flat islets that surround and protect the lagoon, inside the coral reef. There are five in Maupiti. 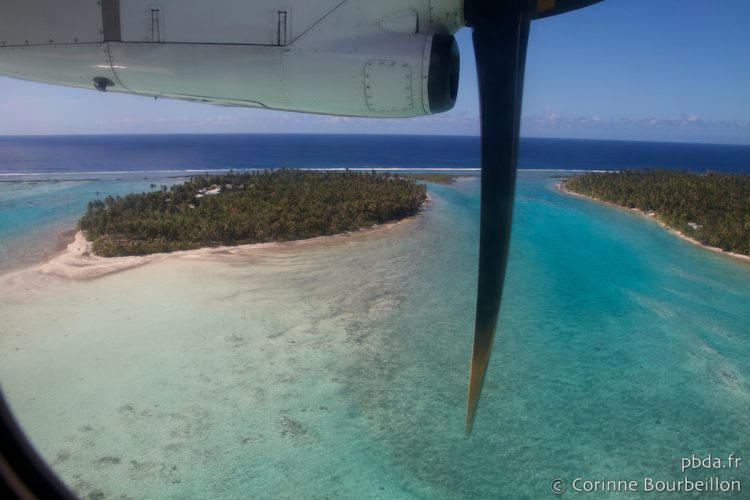 The tiny runway at the airport is set on a Motu. A bed of gray coral, between the deep blue of the Pacific Ocean and the cerulean blue of the lagoon.

Note, for those who prefer the seaway to the airway: there is also the Maupiti Express (affectionately nicknamed Vomiti Express by the locals and metropolitans settled there) that makes the connection from Bora Bora to the island ... But I have not tested.

The princesses of the lagoon

This is Gilbert, from the Auira boarding house, who greets us as we get off the plane. The parking lot here is a pontoon, on the lagoon side. Yes, in Maupiti, we pick you up at the airport... by boat!!! I love it. 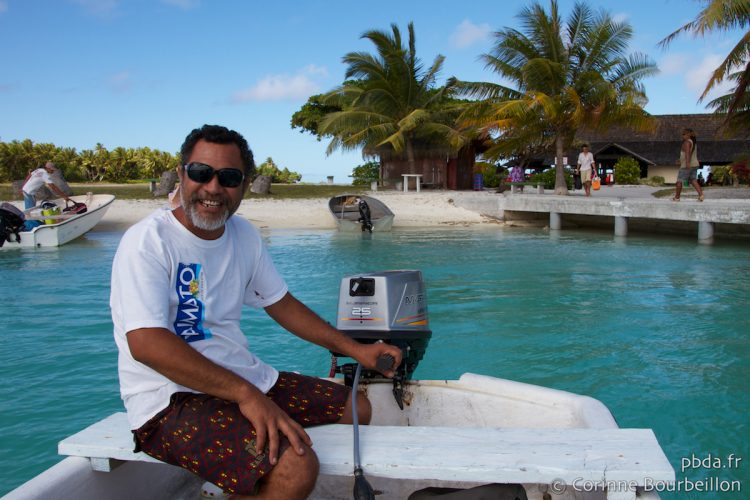 Gilbert passes the traditional necklaces of tiare flowers, so sweet in perfume, waiting for us to collect our luggage.

The recovered luggage, here we are like two princesses, with our necklaces of flowers and our sunglasses, spinning on the wavelets of the lagoon sparkling in Gilbert's boat.

We marvel at the rugged beauty of the island-mountain, planted in the middle of the lagoon. It will be discovered, it keeps changing aspect, according to the time, the light, the side by which one navigates ...

And then we discover "our" beach. Our fare ("Bungalow" in Tahitian) is here, waiting for us, under the coconut trees ...

For five days too short, so we will live on the Motu Auira, located southwest of the island. The only Motu from which you can reach the island on foot: it is connected to Maupiti by a huge sandbank where the water is shallow at low tide.

We tried kayaking too. Not a big success. Fortunately, as Gilbert makes trips back and forth between the motu and the island for the races, we take the opportunity to be brought back, without having to paddle.

A couple of Catalan tourists, also staying at Pension Auira, thought they could make a success of the crossing and soon gave up! In fact, with the tide and the wind, a more than random coordination of the paddles, the novices that we are sailing mostly... in zigzag. 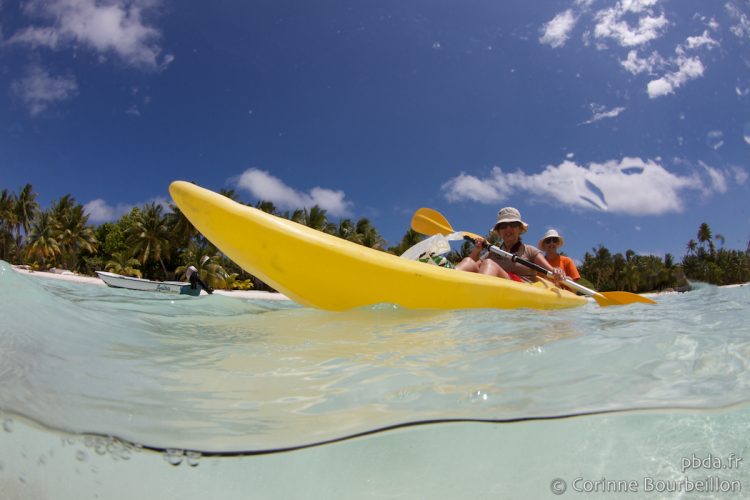 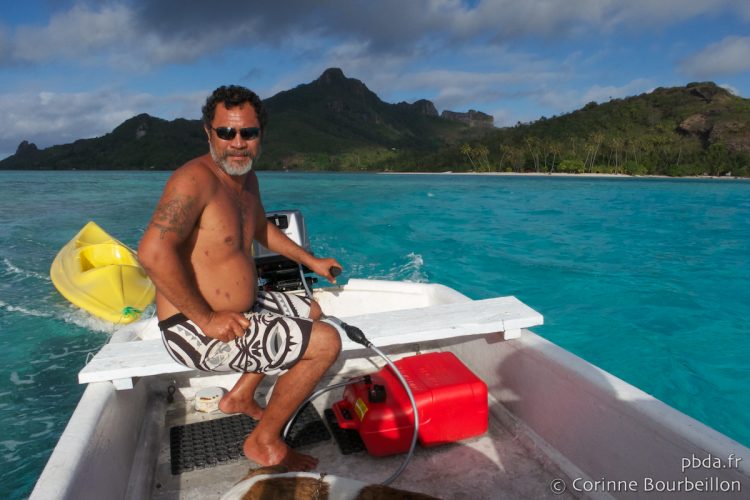 On our Motuwe will live peaceful days, between idleness and walks on the island of Maupiti opposite.

We'll stuff ourselves with raw fish marinated in coconut milk, we'll fish giant clams with Gilbert, we'll cross the coconut grove of the motu to try to see the whales on the ocean side, we will admire the sunsets and the storm clouds, we will take a liking to the beer Hinano, we wade endlessly in the lagoon ... 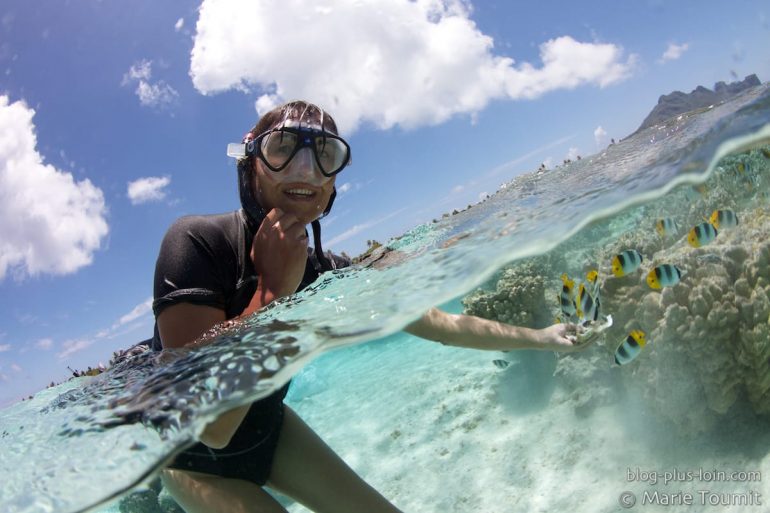 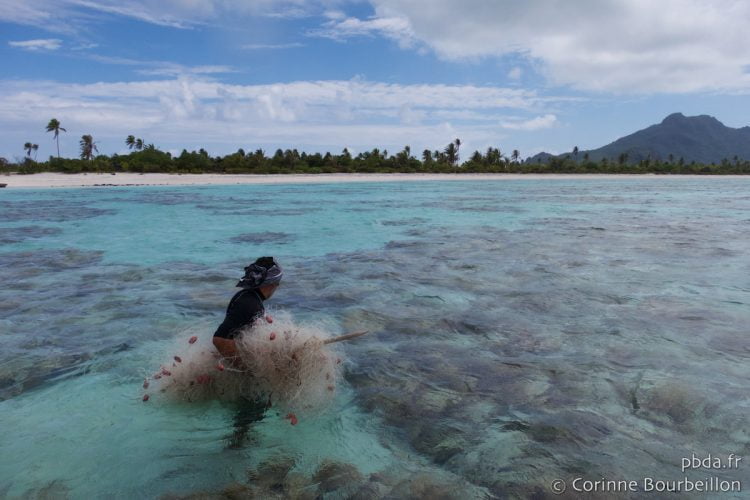 I will also do some dives... I'll tell you about it in a future post!