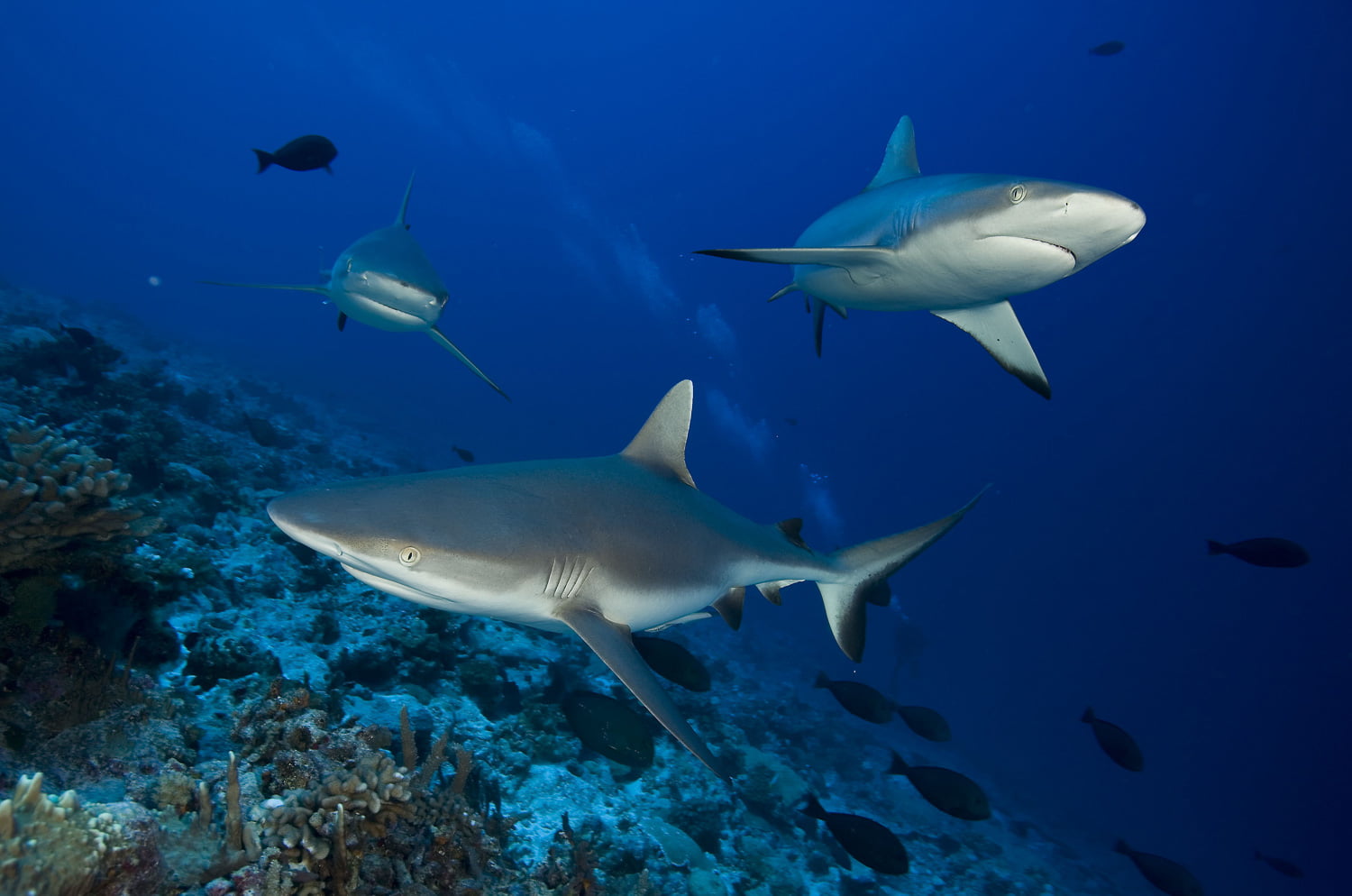 Diving among sharks in Polynesia : Rangiroa and Fakarava

In 2012, I discovered Rangiroa and its spectacular shark gathering. My dream: to go back there and then, next time, to dive also in Fakarava, another legendary Polynesian spot to observe sharks.

The sharks of Rangiroa

Ah, Rangiroa ! This is the most famous and legendary spot, which fascinates divers from all over the world. One can see a "wall" of sharks, when the current is favourable, at the entrance of the Tiputa pass.

For my first immersion, with the excellent little center Y Aka Diving, in this October 2012I'm lucky: the sharks, mainly reef grays, are there in large numbers, at a depth of about 40 metres. So we're at their level and it's an incredible feeling to be able to play right in the middle of the shoal. You almost feel like a shark among sharks!

The show is both beautiful and ... peaceful. The cattle swim in the current, indifferent to our presence. ????

No autofocus, no photos...

With my heart beating, I point my lens towards a big grey for a first photo... In vain. The autofocus of my camera remained in "manual" mode inside the waterproof box ! Impossible, therefore, to focus. Impossible to make a single image... Rageant! 😡

Frustrated, I still take the time to enjoy this fabulous dive, just with my eyes, before having to run with the rest of the team in the current.

On my second attempt, the camera works (this time, I checked before launching). Unfortunately, on that day, the shoal is much too deep, in the 60 meters. Impossible for our longline to go down among the sharks this time. We have to look at them from above, about 20 meters away. In fact, the "wall" is more like a "carpet" of sharks...

Otherwise, in Rangiroa, it is also possible to dive with sharks in the open sea, in the blue. It is forbidden to feed them or to bait them, to avoid disturbing their behavior, but it is allowed to attract them at a prescribed distance from the coast, by spreading a fish "scent" in the water. It is quite impressive: I invite you to go back see the video I posted at the time, with a silky shark quite insistent.

Fakarava, I dream of it!

When I go back to dive in Polynesia, in a future that I hope is not too far away, I will of course put Rangiroa back on the program, but also Fakarava atoll, which I do not know yet and which I hope to discover one day, also located in the Tuamotus. Its southern pass, Tumakohua, also has its "wall" of sharks.

If the comments on the forums and diver blogs are to be believed, the site is just as spectacular as Rangiroa or even more so, and easier to dive... I dream about it! 😍

UPDATE 2018. Arte diffuses aired in June 2018 the documentary 700 sharks in the night by Luc Marescot, on the expedition led by the biologist and underwater photographer Laurent Ballesta to Fakarava.
An exciting film and spectacular images, about the behaviour of these sharks, especially at night, when they hunt. Laurent Ballesta also published a book on this extraordinary adventure.
On YouTube, Arte then uploaded two 7-minute episodes of 360-degree images shot in Fakarava during Laurent Ballesta's expeditions. I give them to you below (don't hesitate to "move" in the video to enjoy them, it's fascinating):