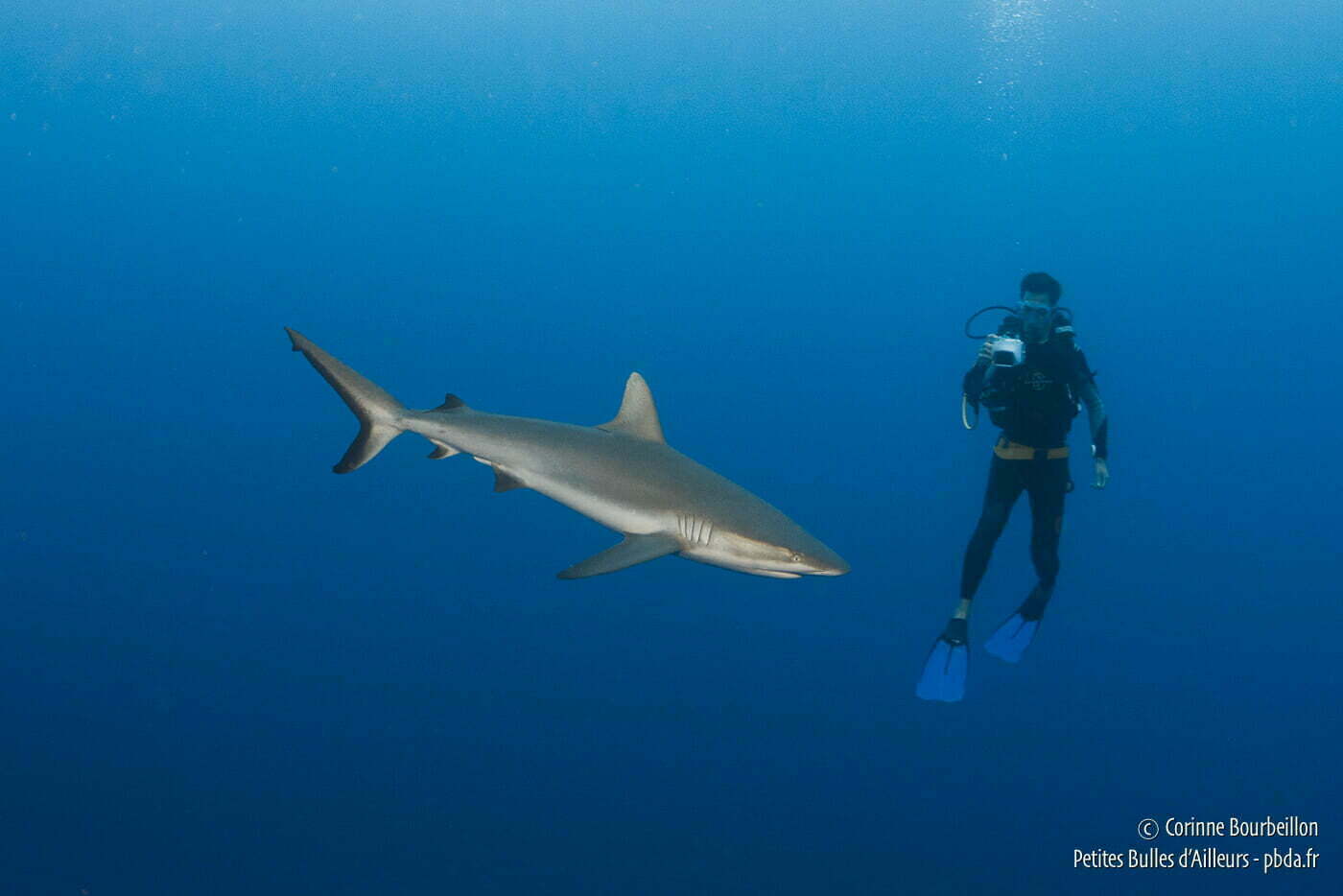 A short video flashback: in October 2012, I set out to meet sharks in the blue of the Pacific Ocean, off Rangiroa, Polynesia.

The Malaysian shark filmed in Sipadanin my previous post reminded me of Polynesian sharks. Yes, exactly one year ago, in October 2012, I was in Rangiroa... So many memories!

I left the story of my Polynesian stay ... And I rediscover, still, lots of videos and photos that sleep at the bottom of my hard drive.

So I continue on the "sharks" theme, with this unusual dive, done near Rangiroa Island, following the "smelling" technique, which aims to attract sharks by diffusing a fishy smell in the water (unlike "feeding" which consists in feeding them with bait).

I have gathered some sequences in the small video montage below:

It's the excellent little center Y Aka Diving who organizes the outing.

(They were also the ones who took me to see the Dolphins of the Tiputa pass, as well as its famous "wall" or "carpet" of sharks... of which I unfortunately couldn't bring back any pictures, due to a camera stuck in "manual focus" mode. 😖 But I'll tell you all about it one day soon.  → See the article here : Diving among sharks in Polynesia) 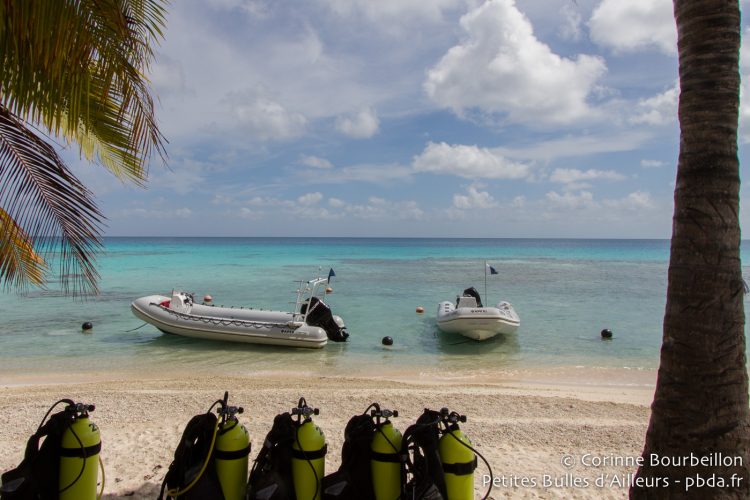 Regulations require that smelling dives be made offshore, far enough away from the channel and the island so as not to disturb the behaviour of the sharks. 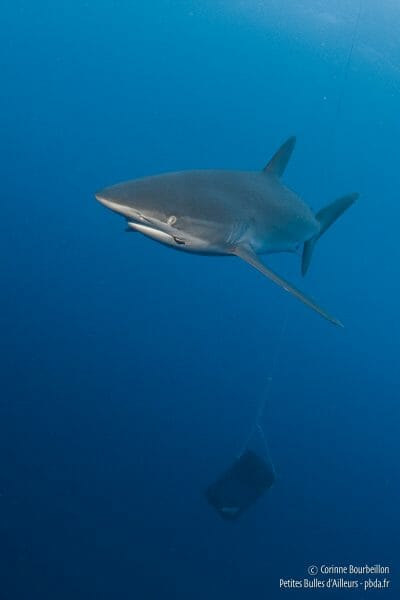 A bonito is placed in a small cage, 15 m underwater. Its "fumet" attracts the attention of sharks, which come up from the depths and appear in the blue, a few meters away from us.

The instructions to our small group of four divers, equipped with cameras and cameras: stay together underwater, always face the sharks, be attentive to the signs of Thomas, who guides the dive, and warns us of each new shark that comes out of a small discreet "ding" by banging on his tank.

Diving sensation, a little dizzying ... There is only blue around and under our fins, no visual cue, except the small cage that dances, connected to a buoy shaken by the swell on the surface.

The heart beats a little louder, each time the shadow of a shark appears, in the infinite blue of the Pacific ...

Several sharks will come around the cage, but only one will stay with us for a long time. A silky shark of quite good size, with a hook hanging on the corner of his mouth. 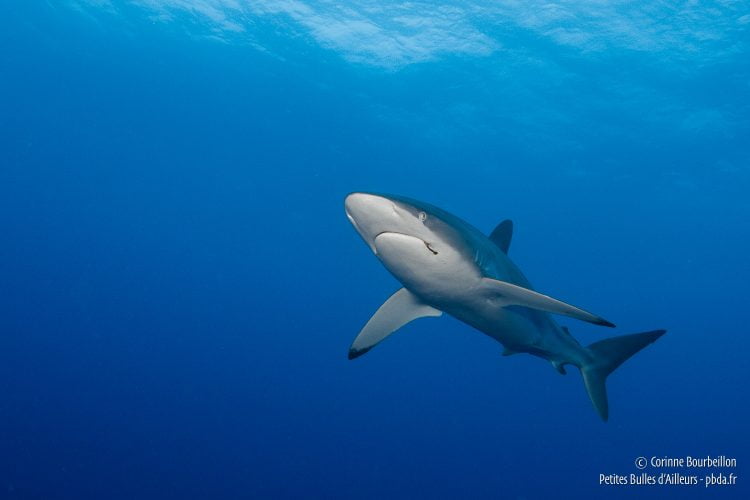 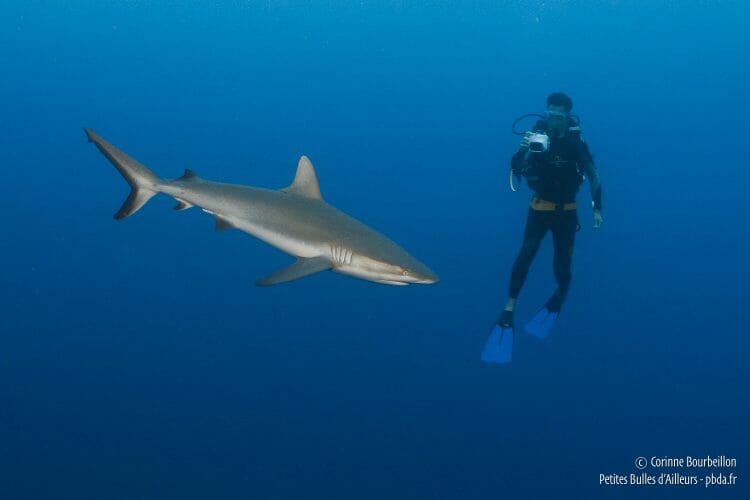 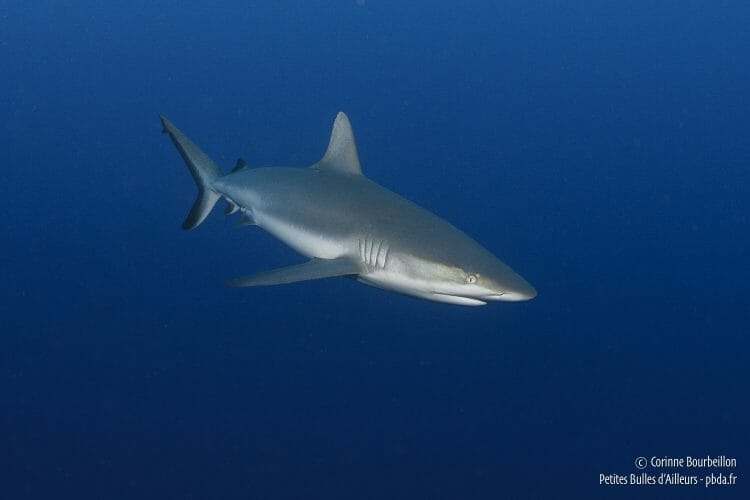 At the end of the dive, as we slowly ascend to the surface watching the twists and turns of this silky shark that is hardly intimidated by our bubbles, a dolphin appears suddenly and comes to dance around us, before moving away in blue…

Beautiful epilogue for an exceptional dive.

Polynesia... to be continued!

I still have so much to tell you about Polynesia !!! This short stay in October 2012 took me to Tahiti, Maupiti, Rangiroa, Moorea…

I have already published several articles, which you can find at the end of this link :

Finally, to stay in the "sharks" theme, I invite you to discover at the end of the link below the video of my traveling girlfriend, who took advantage of an excursion to the aptly named Blue Lagoon, where she discovered the frenzy of black tip sharks. Unusual and spectacular!