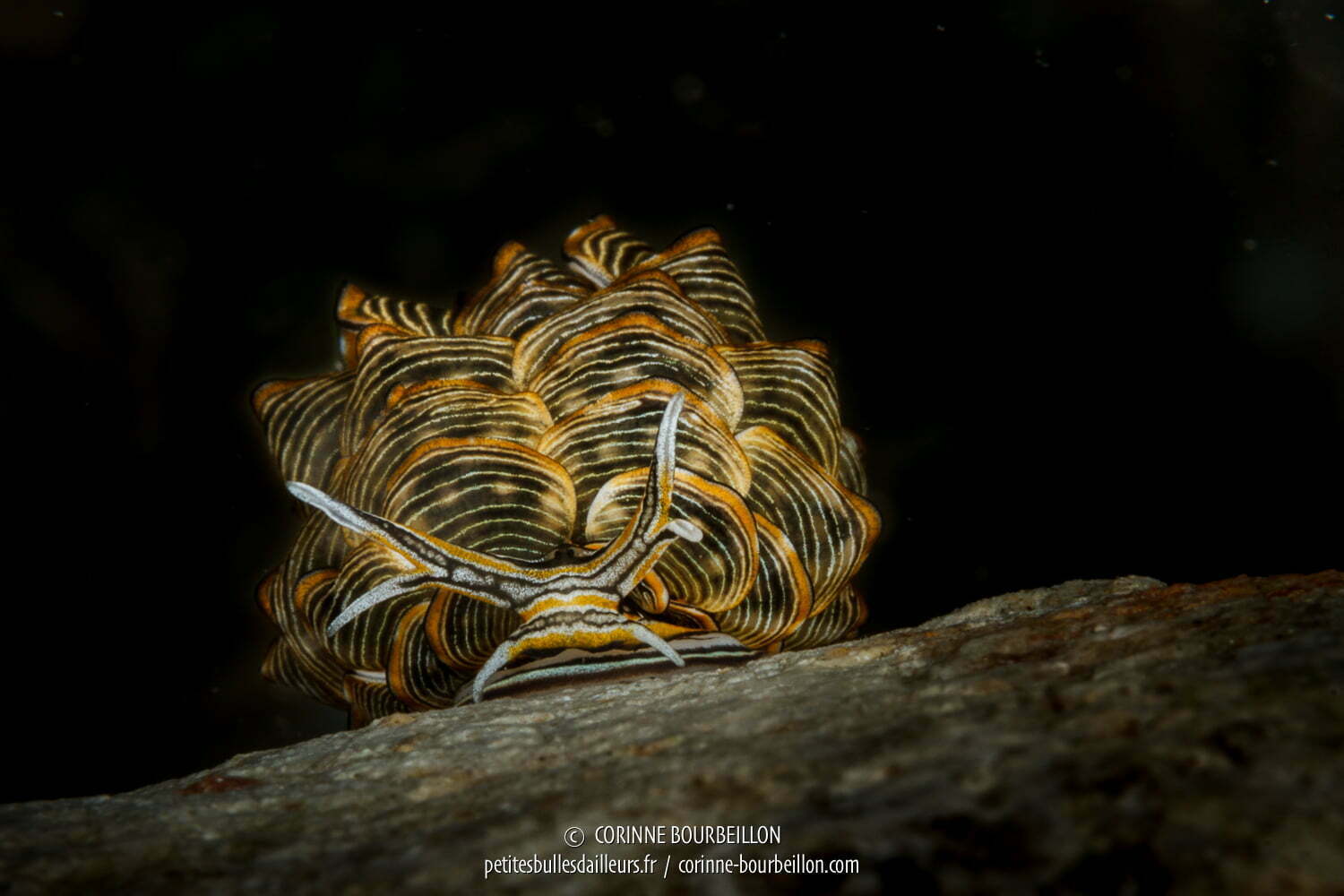 Cyerce nigra is a rare species of nudibranch, much sought after by underwater photographers and can be seen in Romblon. (Philippines, March 2017)

Diving into another world in the Philippines: Anilao and Romblon

Travelling light, I don't know what it is anymore! In March, I went diving in the Philippines in Anilao and Romblon. With, in my luggage, a bulky macro photography gear, to bring back images of the tiny fauna living underwater.

I spare you the tricks I had to deploy at the airport to give the impression that my cabin bag, containing all this precious photographic barda, weighed nothing at all ...

(This subject deserves a post all by itself, I'll come back to it, especially since for the first time in my life as a traveler-photographer-diver, I was grilled between two planes, at the stopover, in Dubai. , by a control unexpected balance establishing that my cabin bag weighed more than 7kg and it cost me the budget of several dives ... ????)

As for my diving equipment, no problem, he goes on hold in the big bag with wheels. (And here I answer the question often asked to me by non-diving friends, a little frightened by my logistics: no, I don't carry any diving tanks or weights with me !!! They are provided on site by the diving centers).

Anyway, anyway. Heavy luggage but light heart, so I flew (again) to Asia! This time, I headed for the Philippines, with a new toy I was very impatient to try: a 100mm "macro" lens (for "macro photography"), more powerful and more quilted than my old 60mm ...

Without going into technical details, this lens works much like a big magnifying glass and allows you to shoot tiny animals, from a few centimeters to a few millimeters. On land, insect buffs use it to immortalize bees or ants. I took him underwater and pointed at tiny shrimp, pygmy seahorses and nudibranchs (which also bear the less than sea slugs)…

Welcome to the extraordinary world of underwater macro photography! 😍

To begin this new objective, after many hesitations, I selected two specific spots in the Philippines: Anilao and Romblon.

Anilao is a village located on a peninsula southwest of Luzon Island, 3-4 hours drive south of Manila, the capital. This part of the coast has become popular among divers and the name of Anilao today designates all of this coastal region, rich in submarine microfauna and suitable for underwater macrophotography, where developed a number of hotels and resorts dedicated to this activity.

Romblon is a small, peaceful island, located southeast of Anilao, about 8 hours by ferry, away from the tourist circuit. It is the marble capital of the Philippines. It is also a diving spot still not very well known, where underwater photographers addicted to the "super-macro" rave about rare species of translucent nudibranchs and hairy shrimps almost invisible to the naked eye!

Anilao and Romblon are therefore very particular spots. I am often asked for advice on dive sites in Asia, so I make it clear that these two will not be suitable for all divers and probably not at all for snorkelers (swimmers in fins-mask-snorkel). Because the specialty of the corner, as in Lembeh Strait, Indonesia, it is rather the "muck dive"...which could be translated as "muddy dive."

In fact of vase, the term muck dives refers to dives on a bottom that is not really spectacular or very engaging at first glance. In Anilao and Romblon, it is most often a mixture of sand and debris of dead corals, here and there decorated with a few "groves" and coral potatoes.

We make observation dives, which require patience and passion. For this substrate, which seems unattractive to novice eyes, is the habitat of many extraordinary small crustaceans, molluscs and fish. It's teeming with life! And in Anilao and Romblon, the diversity of species is remarkable. Scientists continue to discover new ones every year!

Note that there are still "normal" coral sites in Romblon and Anilao, where the usual underwater fauna of tropical waters (not to be missed, the magnificent reef, which is the only one of its kind in the world) is found. Beatrice, near Sombrero Island, off Anilao). But in general, we go there only once or twice during the stay, between two muck dives, to vary the pleasures ... The activity of the diving centers of the corner is mainly turned towards the observation of the microfauna and macro photography.

Obviously, the muck dive is only of interest if you can see those little creatures lurking among all the debris in the substrate or in the nooks and crannies of the reefs. As they are often very good at camouflage and capable of taking on surprising shapes, the dives then turn into treasure hunts, with a suspense worthy of a safari, but for miniature animals. And when you immerse yourself with a camera, in "image hunting" mode, it's quite simple, you don't see time passing...

Very important detail: without a "eagle eye" guide at your side, you may miss a lot. Some species are very small, others are very good at blending in with their environment, and you also need to know where to look.

All the success of diving is therefore often based on the guide and his talent for "spotter", his experience of the site, his knowledge of the environment and wildlife, his enthusiasm of course - as well as his ability to communicate well underwater, to draw your attention to a fascinating detail, that you would never have noticed without him.

Ah, the guides! How precious they are, how grateful I am...

In Planet Dive in AnilaoI had recourse to the services of the adorable Herbert, always calm and benevolent. Native of the region, father of three teenagers, owner of his boats, he is of an infinite patience with the whims of the photographers and very attentive with the chilly divers, who are treated in princesses (nod to my partner Lise) . In particular, he introduced aboard his banca (the traditional Filipino swing boat), a service that is for me a five-star, supreme luxury: the distribution of hot towels (yes, like those given by the stewardesses on the plane) to warm up these refrigerated ladies by 90 minutes of immersion (yes, I am refrigerated when diving in a 26°C sea). A little hot water poured from a thermos, a mini icebox to keep everything at temperature, and that's it!

In Three P Divers in RomblonI didn't have a guide, but I was surrounded by an enthusiastic and passionate German-Philippine team, which works wonders... During my stay, the fantastic Joseph alias "Erap", 50 kilos all wet and "find everything" genius, followed one after the other, who knows where all the nudibranchs in the area live (especially the very rare and very small ones), as well as Philipp, Fabia and Kati, experts in marine biology, who know all the species and turn every dive into a captivating exploration worthy of the National Geographic…

In short, without them, I would not have had so much fun with my new toy. No wonder at every dive.

To say that was not returned to the Philippines, since my previous trip to Visayas in 2008 ! I'm coming back delighted from this special macro trip, which I would have liked to extend by a week or two, to add the big beasts of the reef of Tubbataha. This will be the pretext for a future trip ... ????

Note that for once, I was not alone for the whole duration of the trip, a couple of Parisian friends joined me for a few days in Anilao (cuckoo Lise and Thomas!). A big thank you also to Olivier from the website Asiaqua.com (based right now in Anilao and I already had crossed in Thailand in 2009): when we were making the reservations, my friend Lise and I decided to make it easy for us by delegating to her the organization (à la carte and onions) of our respective stays?

Here. I wanted to ask that in preamble to the other posts to come on this trip. For you to understand why, unlike my previous diving trip to Egypt, there will be almost only photos in macro mode, under water ... ????

The more I dive, the more I am fascinated by the extraordinary wealth of the underwater world, whether XXL or Lilliputian. The more I am aware of the fragility of this ecosystem, where everything is linked, interdependent. And the more I measure the chance that I have been able, for almost twenty years, to observe so many animals in their natural marine environment. Not sure it's still possible in twenty years ...