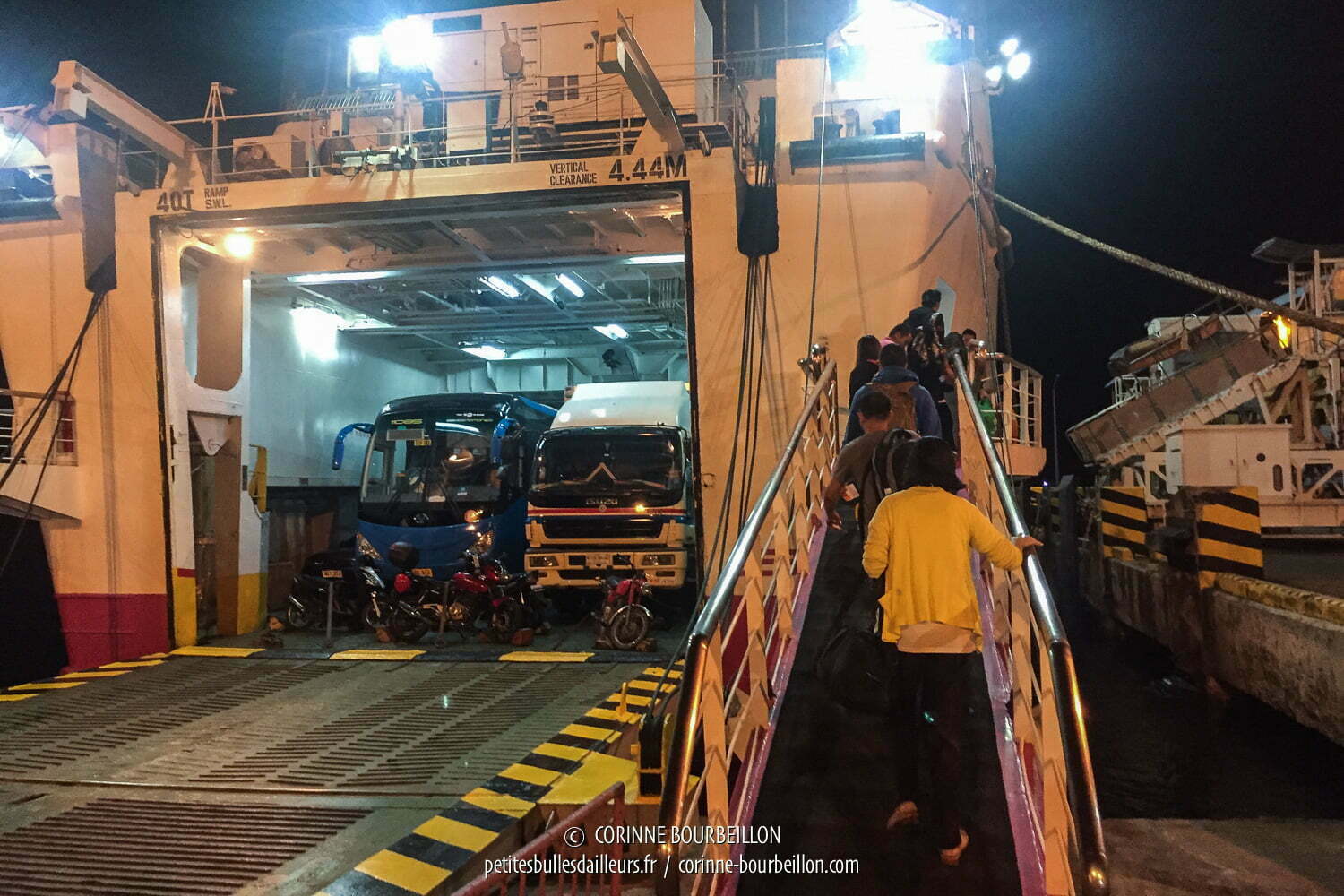 That's it, we are finally allowed to embark! (Batangas, Philippines, March 2017)

How to sleep well on a Philippine night ferry

In the Philippines, you can't escape the ferries when you want to move from one island to another. For long trips, it's often a night ferry...

The port of Batangas

March 10, 2017. 20h. My Filipino driver drops me off at the port of Batangas south of Manila, on the island of Luzon. We have just crossed a somewhat deserted dock area, not very engaging, bristling with grates and fences, between sheds and containers.

He stops in front of a building defended by a new gate, behind which I see people queuing with bags and suitcases. Several imposing ferries are moored to the surrounding docks.

"You already have your ticket? », my driver asks me when he pulls my big bag out of the trunk. That's right, that's right. "So just stand in line there with the people, that's to buy the platform ticket. Then you can go straight to check-in. »

I'm getting ready to embark on a night ferry, the St. Anthony of Padua the company 2Go Travelone of the largest shipping companies in the Philippines. I leave Anilao (where I spent a week diving and photographing nudibranchs) for the island of Romblon.

See my previous post → Diving into another world in the Philippines

I booked my ticket myself via their website...from France before I left. I received my e-ticket by e-mail. As easy and practical as a plane resa ! My route: Batangas-Romblon. Departure at 10pm, arrival at 6am the next morning.

It's not the first time I've taken a ferry to the Philippines. As soon as you want to move around the archipelago, it's almost inevitable! During my previous trip in 2008, I'd embarked several times on big ferries to the Philippines. bancas (the traditional rocker boat) for short links, like the crossing from Leyte to Bohol..., and I had also taken the big Cebu-Bato night ferry to reach Sogod Bay, the bay of the whale sharks ...

For the queue, the platform ticket and check-in, it's just like the driver said. No surprises and no worries. Filipinos are extremely disciplined when it comes to queuing in front of a counter and the check-in is well organized. Despite the crowds, things are moving fast, so I can quickly get on the platform to board.

This is where the diving tourist that I am is reminded of another reality of the Philippines... Men in black are in front of the bridge, with a dog, specially trained to sniff the luggage and detect the presence of drugs.

Of course, when you're here for a vacation and you spend your time underwater, you don't think much about it. Yet drug trafficking in the Philippines has been in the headlines around the world since the summer of 2016, with President Rodrigo Duterte's bloody drug policy...…

The presence of this drug-sniffing dog on the wharf in Batangas reminds me of an identical scene, during my trip to Mexico in 2014on the dock in Playa del Carmen, when I boarded the ferry to the island of Cozumel. I don't think I mentioned it in my posts at the time, but I found these two pictures I had taken on the sly (I remember one of the Mexican soldiers signaled me to put the camera away):

In Batangas, guys wearing reflective safety vests make us drop our bags in line and then back a few steps, with orders to keep our distance and stay in line too, supervised by another guy with the word "Vessel Escort" on his back. Once in line, I film discreetly with my iPhone for 30 seconds... There's music on the platform. To relax people?

The lady next to me, a Filipino woman, sometimes utters little worried exclamations. I remember that I have a packet of cookies in my little carry-on bag among the others. I'm a bit afraid that the dog might stop right in front of it, by the smell of the Oreo's... Then I think to myself that I shouldn't be the only one lugging food around for the crossing. That he's basically been trained not to be distracted by biscuits, this dog...

What amazes me the most is that just before, I was allowed to entrust the 28kg of my big bag with wheels to one of the official port porters, without any control. The porter was thus able to go directly inside the ferry, in order to drop my bag in front of my cabin, without going through the sniffer dog stage.

After a few minutes, which seem interminable, the guys in black signal us to go. And the dog hasn't stopped in front of the Oreos at the bottom of my little bag. This time it's good! I can finally discover the huge ferry that will be my home for the night.

On board, the reception is much nicer. Hostesses and stewards in pink and blue polo shirts, courteous and smiling, inform the passengers. A young woman leads me to my bunk for the night. There are several categories: the dormitory without air conditioning on the upper deck, the dormitory with air conditioning below, four-berth cabins with bathroom and private cabins.

I am in a stateroom by four. And I'm a bit scared when I come in: it's super cold with the air-conditioning in fridge mode, the TV is on full blast and among my roommates, apart from two potential snorers, there's a middle-aged lady with a tiny child, apparently not calm at all... 😱 I exchange polite smiles with each other, take possession of my bunk downstairs and quickly go out to explore the ship before departure.

I discover a restaurant close to my cabin and, at the top of a staircase, the deck of the cheap dormitory, with, at the very end, the thunderous, unbearable music of the inevitable karaoke bar. Two girls on the tiny stage are getting ready to do the entertainment. Around the tables, beers are being brewed. The cruise is fun, Filipino version... ????

I'm going back to my cabin. The whiny little boy seems to be traveling with his father and grandmother. One by one, they take him outside when he gets a little too excited. The fourth occupant is a young man who gives me a contrite smile and disappears silently behind the curtain of his bunk.

The ship has left the dock. The roll is imperceptible. After a while, seeing that everyone seems to be trying to sleep, I turn off the TV always at full blast and the ceiling light... The little boy has ended up huddled with the lady I suppose to be his grandmother in the bunk opposite mine. Everybody drew their curtains. I pull out the ultimate parade, the earplugs, put on my fleece, wrap myself up in my sarong Indonesian multifunctional, pulls the blanket over it and, wedged into the pillow, I fall asleep immediately...

I was afraid I wouldn't sleep, so I slept like a baby. "Madam! Madam! » An unknown voice, far away. The curtain flutters, there is light, a face leaning towards me ...

Huh? What's that? I'm ripping out my earplugs, resurfacing. "Madam! Madam! Romblon! » a guy in a white shirt, a ferryman or a harbor worker, yells at me. He explains to me that we have to get off quickly. The boat will take on board some passengers and leave for the next island. The lady and the little boy are still there, staring at me with round eyes. It's 6:40 a.m. It's almost three-quarters of an hour since we arrived in Romblon.

Ouch. Man grabs my big bag. He's the one who's stuck the 80-pound bag in the stairwell of the near-desert ship. I am, eyes still glued together, hair in a mess. How well one sleeps on Filipino ferries!

On the dock, I can't believe it. The tricycle driver (pronounced "traille-si-keule") who was supposed to pick me up at 6am, sent by the diving center The Three P...is always there to greet me. He's relieved. He wondered if I was on the ferry. He introduces himself: Arnold.

I'm sorry, I explain. I slept ... He burst out laughing. "As I didn't see you coming, I went to ask at the harbour office, he told me. I gave them your name. So they could check to see if you were on board. They had the corresponding bunk number, but I'm not allowed to get on, so they sent someone... "

I thank Arnold endlessly. Without him, I'd have missed Romblon. I would have woken up somewhere else, at sea or on another island! 😱 The Good Samaritan is staring at my big bag on the back of his magnificent yellow tricycle with a decoration inspired by New York taxis. I'll shoot him a week later, because I'll use his services again to visit the island (I'll talk about it in a future post).

I am so happy with his welcome on this first day, as well as the walk he will take me on the last day, that I promised to advertise him. So here it is: his full name is Arnold Mendez, he lives and works in Romblon, he is a great tricycle driver, reliable and cautious, he speaks English, he is very friendly, punctual, available at any time and reachable at 0928 416 2999 (local mobile number).

During the ten-minute ride, I continue to laugh at my morning misadventure. So does Arnold. At 7:00 a.m. sharp, I arrived. I have time to have breakfast, let my camera and lens, which are iced by the air conditioning and covered in mist, cool down to room temperature, and then lock them away. in the waterproof housingbefore jumping into the first dive boat of the day at 9:00 a.m.! With such a successful arrival, I already know I'm going to love Romblon... 😎