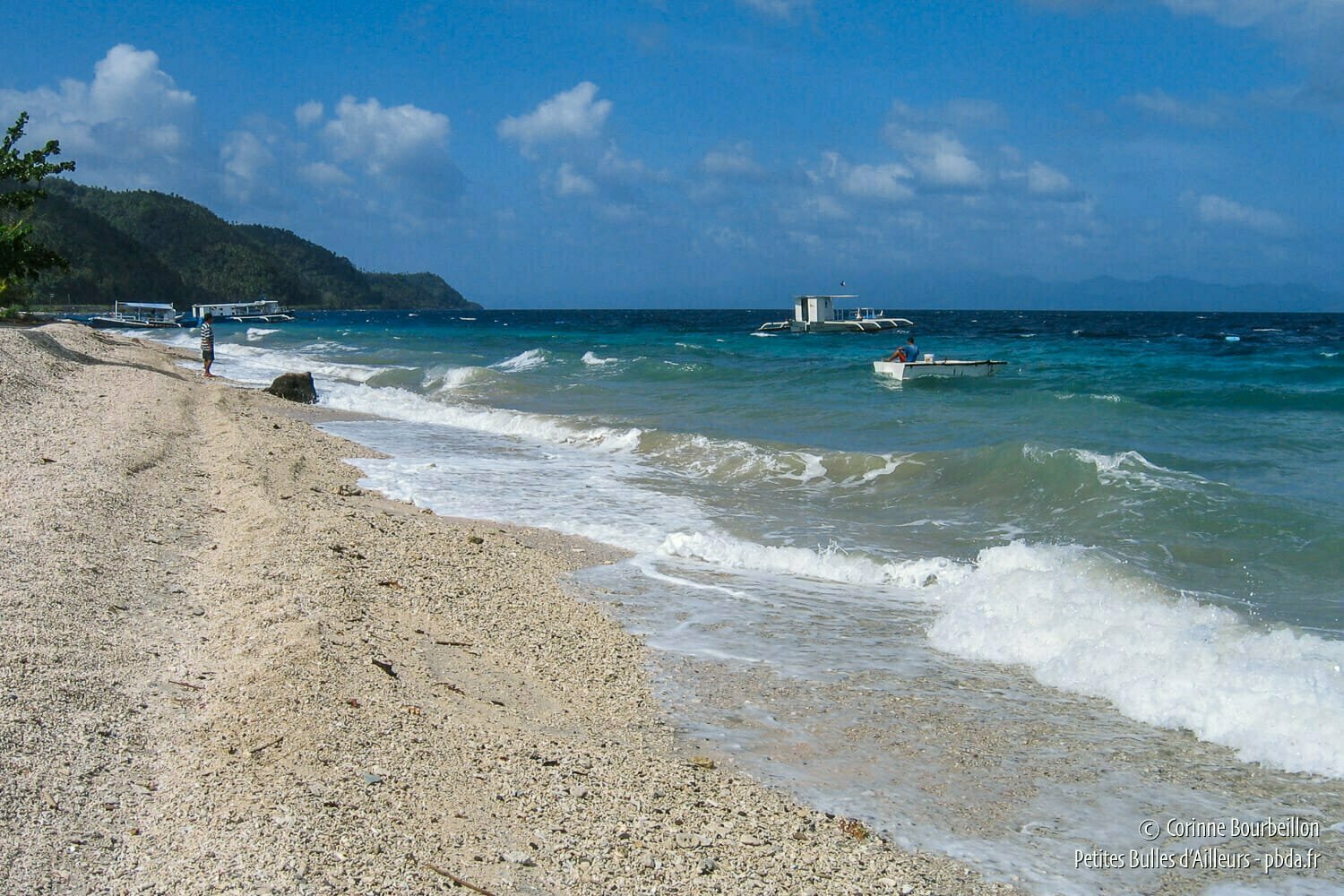 First stage of my Philippine journey: the southern tip of the island of Leyte. For dives in Sogod Bay, in the hope of crossing the road of a whale shark…

The few tourists in the area are there for that too. Sogod Bay is known for being frequented by these nice giants of the seas.

I dream to meet again this huge shark (that I saw once in Thailand, in 2006). It is the largest fish in the world (it can exceed 10 meters, I refer you on Wikipedia) and he is totally harmless to the man (he has no teeth and feeds on plankton).

But so far, nothing! Already three days that I've been diving in Sogod Bay, without having crossed the shadow of a whale shark's tail. At the same time, it's not a big deal. The coral is superb here, remarkably preserved. And tropical underwater fauna abounds.

I'm enjoying new nudibranchs (sea slugs), toad fish (or frogs) and other critters, including a very nice "knitted striped" snake. A tiny pink pygmy seahorse has even been found today.

There are not many divers on the sites. Barely two or three resorts operate in the area. And then this part of the island, away from the tourist circuits, is not so easy to reach. Ferry schedules from Cebu, the central island of the Visayas, where the airport is located, are more than random.

Mine, the 6pm Cebu-Bato ferry that I thought I was going to take when I got off the plane, had, as if by chance, been replaced by another one... at 1:30pm. Which I missed. Tough luck. No boat to Bato...

I went for the 9:00, with bunks on deck for the cheapest tickets. But me, I travelled with the rich, in a tiny cabin called First Class, with four berths, TV (!) and air conditioning like a fridge. Arrival in Bato at... 4am!

Fortunately I was able to call Sogod Bay Scuba Resort (SBSR) who I had e-mailed before leaving, and they sent a guy to pick me up before dawn by car from the boat. Then, a journey of about an hour from Bato to Lungsodaan, a tiny town at the crossroads of two roads, depending on the municipality of Padre Burgos, where the resort is located.

In this season, the wind is blowing hard every day on Sogod Bay. On the beach of dead corals, big sound waves crash non-stop and rock my sleep.

My room is facing the sea, at a nice lady who welcomes tourists for the resort when they are full, just next door. I like it there so much. My terrace is more intimate than the SBSR's side-by-side rooms.

On my right, I can see in the mist the blue shadow of Limasawathe island where Magellan landed. It was there that the very first Spanish Mass was celebrated in the Philippines in 1521... The first step in the Christianization of the country.

I live right in front of a chapel, which I hadn't noticed at the time when I arrived at dawn on Sunday morning. I collapsed on my bed, exhausted, and a few hours later joyful songs woke me up. It was Sunday mass. I went to see.

In front of the chapel there is a large blackboard with the words "Welcome visitors 2008". Inside, a karaoke atmosphere, with a guy at the microphone to get the faithful to sing along to a lively tune, everyone standing with arms raised, with words to follow written on a whiteboard in the background.

Those in the back rows turned around with smiles and nods to watch me approach the door. A little man came to shake my hand and offer me a ride... but I was hungry. I didn't stay. I waved to everyone like the Queen of England, and ran to the resort for breakfast.

See all articles on this trip → Philippines: Visayas - February 2008