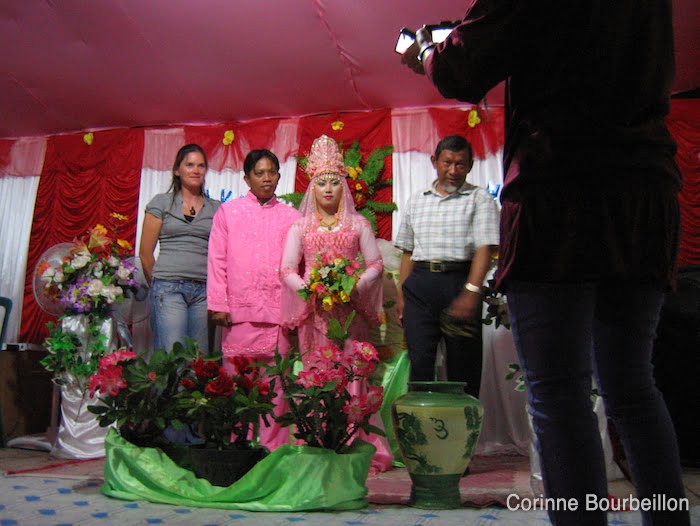 The bride and groom of Derawan

My short stay on the small Indonesian island of Derawan last July allowed me to attend no less than two weddings! Two almost identical weddings, with kitsch decoration and pop-mallow orchestra. More of a social obligation, I feel, than a real party.

Anyway, I wouldn't like to get married in Derawan!

You have to disguise yourself as a doll, wearing a headdress, wearing make-up, over-pumped. Then hold the hours pose on a throne in a candy pink or electric blue decor. Welcome with a smile all the people of the village who parade on the platform (since they all drop a small ticket in a vase provided for this purpose).

And pretending to enjoy the music of the guest group ...

What we do not see on the video are the rows of plastic chairs and planks acting as tables, set up in front of the platform, under a vast tarpaulin.

Nobody dances, people just sit there and watch.

Everyone received a small meal in a cardboard box, with a cup of water. Offered by the families of the newlyweds. But no one eats, most will bring back his portion of nasi goreng (fried rice) and his cupcakes at home.

Strange "wedding party", really. It starts around 9:00 and ends a little before midnight. There's not much going on. Pretty dull evening... I guess the real wedding ceremony takes place at another time.

Once settled on his plastic chair, everyone sits quietly there. One simply waits for one's turn to rise on the platform, to greet the newlyweds with a quick handshake, or more cordial according to the degree of proximity or affection that one has with the family.

We do not hesitate to have their picture taken by their side. This is obviously part of the politeness appreciated, with the small note deposited in the vase.

I resisted the solicitations of a lot of people who absolutely wanted to push me to the platform for the famous photo ...

Marjolijn, a young Dutch girl with whom I sympathized, did not miss any opportunity to ask at each wedding (see photos below).

She tells that on his own blog (in English).

Like her, what surprised me the most is the musical animation, if I may say so.

Especially that of the second marriage. As a reminder, we are in Muslim country. I found it very curious to see the scene of these three female singers dressed up and very short dressed, who began to wiggle as in a video clip. Without beguiling, it was flashy and vulgar.

Admittedly, Islam is rather relaxed on an island like Derawan: not all women are veiled, far from it, and the girls play volleyball every night, bareheaded, in simple Bermuda shorts and T-shirts. But still, these three chicks on stage didn't fit in with the rest.