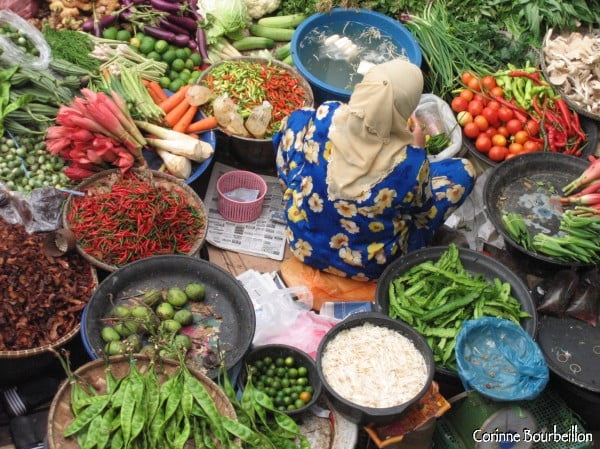 Mosaic of colors at the central market of Kota Bahru. (Malaysia, July 2006)

Kota Bahru, the capital of Kelantan

Despite my first impression of Kota Bahru (Malaysia), I'm starting to like it. The city is ugly but the people are nice...

Practical details to be settled

I refer you to the previous post for the small adventures of my arrival in Kota Bahru. Phew, I finally took it, this shower so desired! After that, it was necessary to deal with the most urgent things: to change money for my stay in Perhentian Kecil, to book the crossing. The question of the boat is settled at the reception of the hotel, they sell the tickets. And they promise me a cab for the next day, at 8 am, which will lead me to Kuala Besut, from where the boarding is done.

The nice receptionist confirms that at this time (it is already not far from 17h) all banks are closed.

She sends me troubleshooting in Azram Photo (good plan which appears elsewhere in the hitchhiker) : it's good timing, it's in my street, almost in front of the hotel. The store does not only develop pictures, but also does currency exchange. And at a better rate than the one practiced at the airport of Kuala Lumpur, I compared...

As I deposit my beautiful 100 euro notes that have never been used at the counter, the previous customer turns to me and asks the ritual question: "Where do come from?..." "From France." I answer him. "Ah! Hello, how are you? Welcome to Malaysia! » exclaims the guy, in impeccable French.

I am fed up and congratulate him for his perfect accent. He explains to me that he lived in Paris, near the Place d'Italie. It is also his little comment on Zidane and the Blues. He is of the opinion that France will win against Brazil. Then he greets me politely, before leaving.

Walk to the Kota Bahru Market

It must be said that in Kota Bahru, the Blues are everywhere ... and even advertise for a mobile operator.

I then go to the central market of the city. Fascinating show for the eyes ... and the nose. I climb upstairs of this kind of big concrete arena full of strange odors to see better.

The ground floor is occupied by the vegetable stalls: the dozens of stalls arranged next to each other form a huge colourful parterre.

Down below, around the building, I stop near the fruit vendors. And I make them laugh, draw my camera to immortalize their oranges and watermelons.

Finally, despite my not very favourable first impression, I'm starting to like it, Kota Bahru! The city is ugly, but the people are nice as anything.

Leaving the market, I come across a shady square, with a corner burrow. It smells good, my stomach rumbles ... In addition, there is a huge fan blowing fresh in front of a table available, waiting for me.

I ask myself, under the encouraging smiles of the women who run the restaurant. There, it is hard, since there is no menu displayed ... And the girl who cares for me speaks English poorly.

I make an effort of memory and gather the meager vocabulary which I could retain from my stays in Indonesia (the two languages, the bahasa melayu and the Bahasa Indonesia are very close): "Uh... makan? » She's nodding her head. "Eat", yes, logical, we're in a restaurant. Ah, ah! There it is. My hungry belly inspires me: "Nasi goreng ayam! » I add, triumphant. Her smile widens, and the two matrons behind her are bowed with laughter.

Still, I soon got my fried rice with chicken, and it was delicious. Eating: an essential moment in a traveller's life...