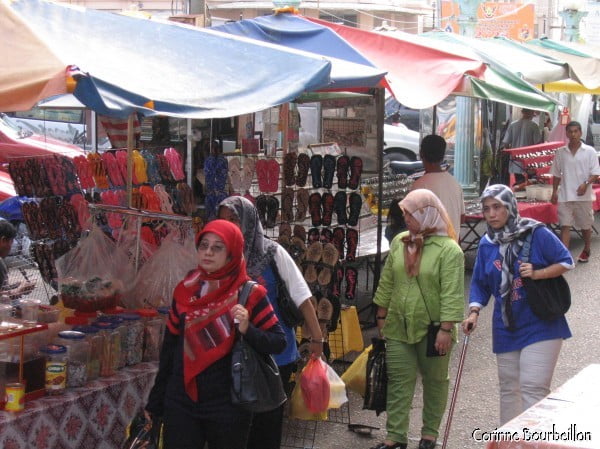 In the streets of Kota Bahru. Women wear scarves and covering clothes, but gay and colorful. (Malaysia, July 2006)

The train that never arrives has finally arrived, taxi drivers rushed on the handle of farangs who came down with their backpacks. And we all climbed into a new specially chartered livestock trailer to take us a few hundred meters between the station and the border crossing.

Once the forms were completed and the passports stamped, the eight others, including my new Norwegian friends Uhle and Teresa, wanted to go directly to the islands. Perhentian.

So we separated and I took a cab for myself Kota Bahru, 45 minutes drive away. Which left me at the central bus station, which fortunately is, except that I did not know it yet.

All I knew from Kota Bahruis that it is the most conservative Muslim city in Malaysia. Indeed, around me, all women wear the headscarf and long loose clothes, colorful but well covering.

Exhausted, thirsty, I drag myself under a blazing sun to a café on the corner. The city is very ugly: concrete, big congested arteries, big billboards everywhere, with big letters of well-known brands: Nokia, Bata, Sony... In short, nothing very engaging at first glance.

Dripping, I order a Coke, get out my guide and try to find me in vain. As usual, the plan of hitchhiker is very badly done, and the street I'm standing on is not marked. Pfff... Hurried, I sweep the tables around me with my eyes. Only men as customers. Nobody is interested in my case. You'll have to beg for help... I'm not going to take that shower anytime soon!

My savior will be Monsieur Tê. While I was asking my nearest neighbor if there were guesthouses in the area, another guest came forward and told me, in impeccable English, that he knew several nearby and could indicate the path. Just time to let him finish his tea ...

Thanks to Mr. Te, who even accompanied me, I arrived safely. Two blocks away, in fact! Mr. Tê is Chinese, a jeweler by trade. His fingers are full of bagouzes with big, flashy stones, real ones, which he proudly listed for me: ruby, sapphire, emerald...

As I did not look well impressed, he started to talk to me football (every time I decline my nationality, everyone thinks they have to tell me about Zidane and company, as if they were my friends) .

According to Tê, the Blues are high class players, but their problem is that they are too old now. I listen politely, but I do not care, I want to ask and take a shower, that's all.

Mr. Tê is fortunately a very courteous man, and he leaves me at the door of a hotel, not without having indicated to me Chinatown, just behind, if I want to make me a restaurant then ...