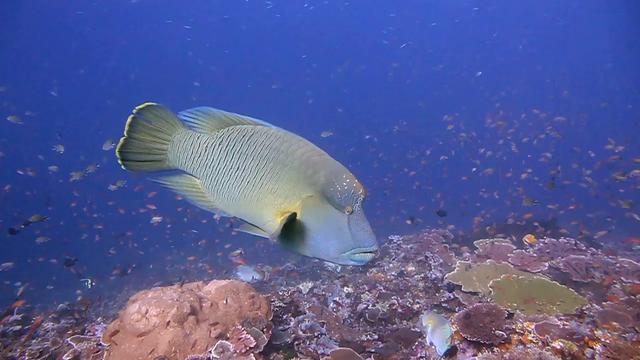 Diving in Komodo, I was dreaming of it! The reality was beyond the dream... First preview in video, at the fabulous site of Batu Bolong.

Welcome to Batu Bolong. A rock planted in the sea, in the heart of the Komodo Archipelago, Indonesia.

At each end, disturbing whirlpools and whirlpools. Between the two, in front of the pebble, a surprisingly calm and smooth water. That's where the divers are dropped ...

Under the surface, we do not know where to turn. Shoals of fish are moving in all directions, hunting jacks are spinning under your nose, imposing napoleons look at you without fear ...

It's spectacular! The concentration of fish per cubic metre of water is truly hallucinating. I've edited a little video, so that you can see for yourself:

Contrary to what I feared, diving is not too physical. Jerome, my guide, who knows the site by heart, watches over our trajectory so that we remain protected from the current.

We go back and forth from one end to the other of the reef, going up a little to each length. Jerome beckons me to go back in the other direction as soon as he feels the juice, a little before the tip of the rock.

All the subtlety of this dive consists in staying under cover, in the area least exposed to the underwater "wind", near the wall, to enjoy the serene spectacle.

I do not see the time pass. Even at shallow depth, when we finish the dive, the show continues. Banks of small fish are made and disintegrated tirelessly under the rays of sun that cross the surface.

A rock surrounded by currents

With Crystal Rock, where we dive the day before, Batu Bolong is undoubtedly one of the most beautiful and impressive sites of Komodo. At sea, seen from afar, it looks like nothing, this pebble. But under the surface, we take full eyes.

Jerome confides to me, once we went back up to the annex, that this rock also has a sinister reputation: there have been deaths here... 😱

Brrr. He did well to tell me after, not before the dive! One thing is for sure: you don't dive at Batu Bolong without a serious guide, who knows the tides, the currents and the site.

The schedule goes back to the Pascha by tacking between two whirlpools.

I cast one last wondering look at Batu Bolong. I'm not about to forget this piece of rock surrounded by currents.