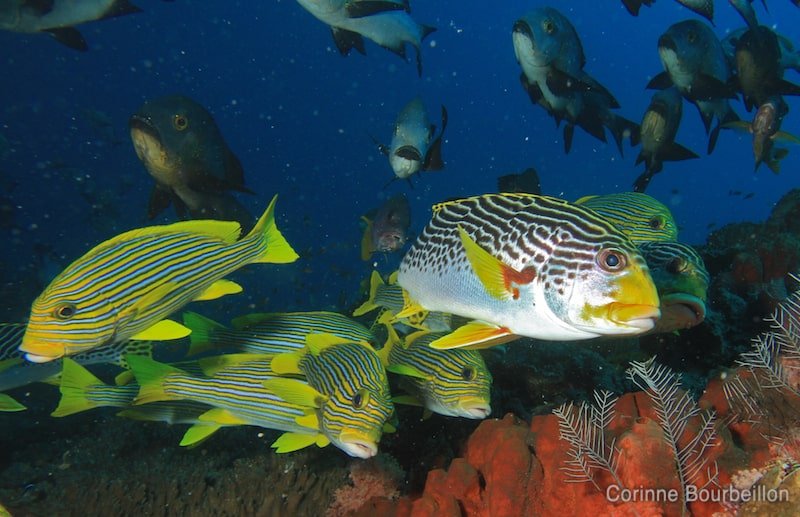 October. Already. Indonesia and Komodo are far away. And my underwater photos sleep at the bottom of the hard drive for three months! I rediscover them these days with a new eye, astonished. I can not believe it. I saw all that, me? It's crazy.

Hop, to the water!

You remember my princess boat, on which I made this fantastic dive-cruise, last July, in the Komodo National Park? I've already shown you a few videos, some of the critters who frequent the place: manta rays,, napoleons... Ah! And then I have sharks in shambles, too, in video. I just have to find the time to put together my little sequences ... It's coming! 😉

In short, what is crazy about Komodo is the profusion and the infinite variety of wildlife under water. Corals explode in color, gorgonians are giant bushes, barrel sponges can hold a man, and the banks of gaterini, so photogenic, are everywhere.

I have been diving for a long time in Asia, and Indonesia is by far my favorite destination. This huge string of islands seems inexhaustible. Impossible to be jaded!

And Komodo, where I had never soaked my fins before last summer, has now gone to the top of my little personal top asian dive sites ...

The Komodo National Marine Park is located in what are called the Small Islands of Sunda (it's all the way to the east, near Flores, after Bali, Lombok and Sumbawa). It is further and less accessible than Bali. Diving is not as cheap as in Thailand. There can be currents of madness. But it's really worth it.

I keep a dazzled memory, really. I love going back to the surface, amazed, like a kid, forgetting everything. This happiness, that happiness, seemed to me more intense in Komodo than elsewhere.

Komodo on land and underwater

Three months after this fabulous trip, caught again by the daily, I aspire to find these sensations both exhilarating and soothing that give me diving and photography under water.

But when I talk about this Indonesian journey to my friends or my entourage, it's the part that interests them the least. As they do not dive, it does not tell them anything, it does not stir anything in them. What I conceive pretty well. By the way, I now avoid giving them my pigeon pics when I return ... 😂

Nevertheless, diving has become, over the years, my various trips in Asia, something important, essential, which brings me a lot. It's more than just a leisure activity, more than a pleasant tourist activity.

The more I explore it, the more the underwater world fascinates me. The more I feel good too. To those of you who dive, do you do the same thing?

For divers, I still give below some subaquatic images of Komodo ... 😉 And for the others, promised: in the next article, I will return on the mainland, on the island of Rinca very exactly, to introduce you the famous Komodo dragons!