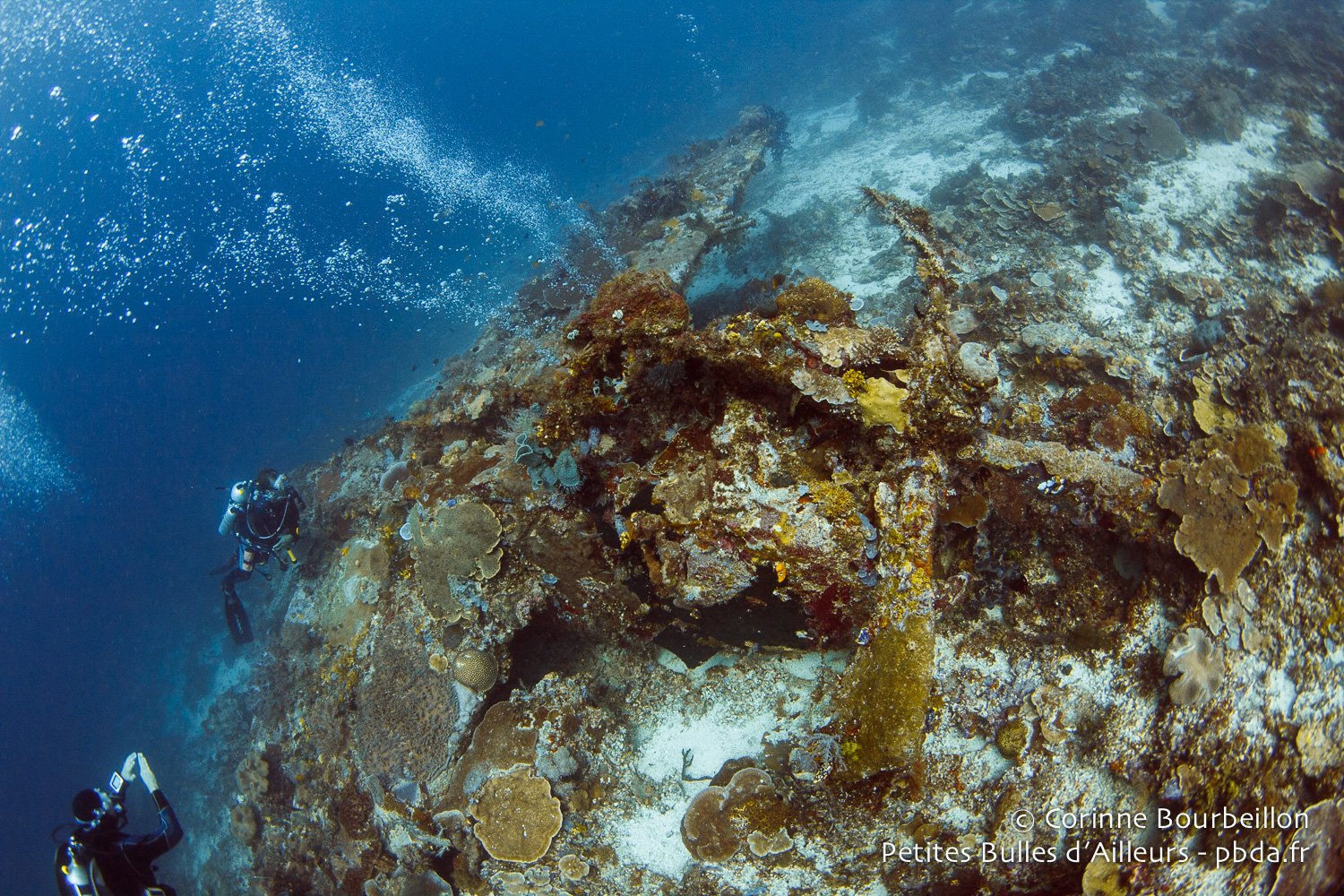 A plane under the sea

At Raja Ampat, you don't just find coral underwater. There is also scrap metal from World War II. Fell from the sky!

Indonesia cruise from Ambon to Sorong, that I made aboard the WaowThe first time I've ever been able to dive on an airplane wreck, I've had the opportunity to live a new experience: diving on an airplane wreck! The wreck in question is located on the reef of Wai, a small island near the large island of Batanta, in the northern archipelago of Raja Ampat.

Until then, all wrecks that I've had the opportunity to dive on - famous wrecks like theAmoco Cadiz in Brittany and the Liberty in Bali, and many others less well known in the Red Sea, the Maldives, Thailand, Malaysia, Indonesia, etc. - all, therefore, were boats.

As a result, on November 4, 2015, when the programme for the day is announced, I'm quite enthusiastic. There's something unusual about diving on scrap metal, which for once doesn't belong to the world of sailors, but to the world of aviators! And it's also a bit like diving into history...

A remnant of the Pacific War

The aircraft in question is an American P-47D fighter. It crashed at sea on October 21, 1944, during the Pacific War, during the Second World War.

He was part of a squadron of seven planes, part of the island of Noemfoor for a mission over the island of Seram. But on the way back, surprised by the bad weather, soon running out of fuel, the pilots opted for a forced landing, thanks to a hole in the clouds. The detail of the story is reported right here and the, in English, at PacificWrecks.com. The seven men survived and were later recovered by the US military.

This is not the only aircraft sunk in the area, but this wreck is between 26 and 33 metres deep, making it one of the few wrecks in the area that is easily accessible for recreational diving. And its excellent state of conservation makes it a very nice subject for photography!

I'm lucky, because the viz, that day, is rather good and allows me to make some pictures from far away, giving a good overview of the plane.

When I got back to France, I did a Google search to see what the plane looked like. Judging by this image provided by Wikipedia, a P-47D in flight, it looks pretty good:

More than sixty years later, this warplane has become a beautiful articial reef, which is as much fun for fish as it is for divers. And you can see by the position of the wings that it is in fact lying "on its back" in the sand and coral.

The plane isn't very big, about 50 feet long. It has been nicely colonized by soft corals and it attracts fish. We see an emperor angel fish, a few batfish and I manage to scare some shy sweetlips who have taken up residence under the cabin.

I really liked this dive and my only regret is not being able to do it with nitrox (Air enriched with oxygen), which would have allowed me to hang out a little longer at this depth to make more images ... But a compressor failure, occurred during the cruise and irreparable at the time, forced us to to dive with air.

We finish the dive by gradually ascending along the Wai reef, which I find rather monotonous, compared to the profusion of life to which the waters of Raja Ampat have accustomed me, in the heart of the coral triangle. But the wreck in itself is worth seeing in my opinion as an underwater photographer. We do not have every day the opportunity to admire a plane from the Pacific War underwater.