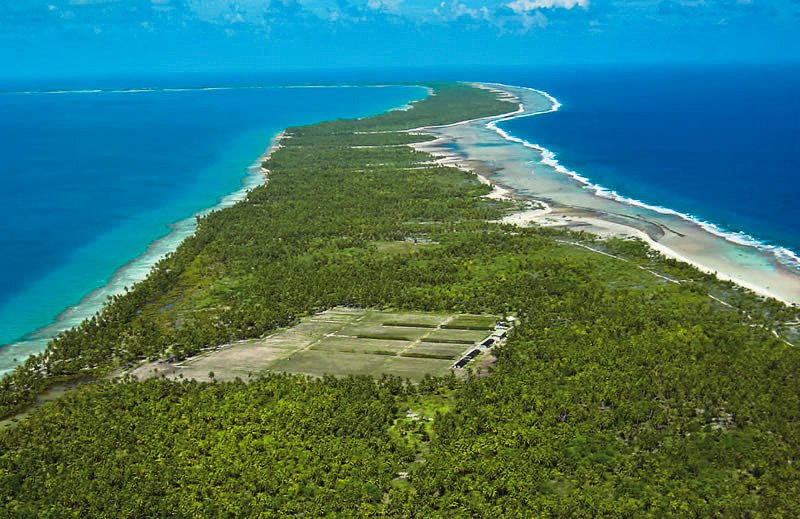 Do you know coral wine?

Before disembarking at Rangiroa to dive, in october 2012I didn't even know they produced... wine ! It seems incredible, but yes, we grow vines in the middle of the Pacific, in the Tuamotu archipelago in Polynesia.

Vines between ocean and lagoon

It takes place on a motu (coral island) of the immense atoll of Rangiroa. Between the lagoon and the ocean stretch the rows of vines of the "Vin de Tahiti - Domaine Dominique Auroy".

The coral soil is enriched by natural compost (crushed algae and shoots). Papaya and tiare protect the vineyard from the spray.

At the rate of two harvests a year, these vines give three whites (closed reef, white coral and white fluffy) and a rosé (pink nacarat).

During my trip in 2012, I unfortunately did not have time to visit the vineyard, but I tasted the coral white (southern harvest 2011), at the cocktail hour, facing the lagoon. Moorea.

It is a soft wine with a beautiful golden color, I remember the fruity and mineral notes. "A blend of Italia and Hamburg Muscat grape varieties, specifies the website of the domain (www.vindetahiti.com).

I am absolutely not a specialist, but I found it very good! I guess I enjoyed it all the more as I was under the coconut trees in an enchanting setting. I obviously recommend tasting it (in moderation) in these ideal conditions... 😉

I did some research on this amazing vineyard project. It was imagined in the 1990s by businessman Dominique Auroy. "I think I made wine out of provocation at first." he writes in his book Tahitian wine. Passion then caught up with him, he says.

Initially, he planned to set up in several Pacific islands. But it will take a lot of obstinacy, acclimatization tests, selection of grape varieties and irrigation work before the first harvest, in the early 2000s. The 6 hectare estate is today capable of producing up to 35,000 bottles per year (for more information, I invite you to read the article on the harvest of October 2015, in The Dispatch of Tahiti).

Why did you choose Rangiroa? Because, among other things, " of its limestone and coral soil, which gives a taste of gunflint close to certain sancerres ", explains Sébastien Thépenier, wine oenologist for a dozen years, quoted by The Express in July 2014. An almost ideal terroir, compared to the other archipelagos: "Less dry than in the Marquesas, less humid than Tahiti, and not as isolated as the Austral Islands. »

(Source of the images of the vineyard : www.vindetahiti.com)