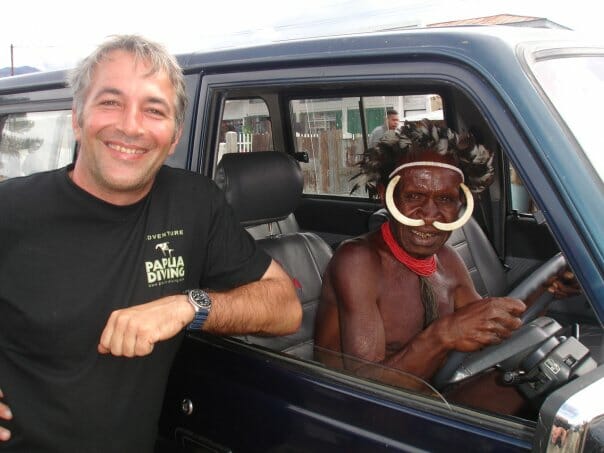 Max Ammer, a Dutchman among the Papuans

The Dutchman Max Ammer is the "pioneer" of diving in Raja Ampat. Quite a character. He is an eco-adventurer, an enthusiastic explorer and a fabulous storyteller.

I am delighted to have been able to meet Max Ammer during my stay on the island of Kri in Raja Ampat, Indonesian Papua, in March 2012. I did not know, before coming, if he would be there. It is he who holds the two resorts of Papua Diving on the island (the Kri Eco Resort and the Sorido Bay Resort).

By way of introduction, I invite you to watch the videos below...

Update, September 2020. The first publication of this article dates back to 2012... I am adding this video from 2020, in which Max Ammer recounts his career and the initiatives launched in recent years (electric catamarans, helicopters, aviation in Papua, in addition to environmental and social projects developed locally), all against a backdrop of sumptuous underwater images, which reflect the extraordinary richness of Raja Ampat. This video portrait (in English) gives a good idea of the character:

I leave below, as a complement, another older video, which I had inserted when this article was first published in 2012.

We discover Max and his small yellow ULM plane of the time (the images are quite old) intended for the missions of conservation and protection of the Raja Ampat Natural Park (tracking illegal fishing boats and marine animals, scientific expeditions, reports, etc.).

You can see it in these images, the flight over the archipelago is spectacular! And you will surely have noticed this incredible "caravan" of manta rays,, whose dark triangles can be seen lining up under the surface ...

Max unfortunately managed to crash into the water with this pocket seaplane. He was incredibly lucky, he escaped unhurt. Not at all cooled down by the accident, he hopes to fly over Raja Ampat again in a new aircraft, he confided to me in 2012: "The project should soon become a reality..."

Update, December 2018. It took him several years, but Max managed to have his first helicopter built, on the island of Kri! A "pocket" helicopter of the Bell-47In December 2018, I even had the chance to board and fly over Kri and its surroundings during test flights! Maybe I'll tell it on the blog one of these days...

Before leaving for this first stay in March 2012 at Raja Ampat on Kri Island, I had already read a lot on the internet about Max Ammer, the Dutchman who "pioneered" scuba diving among the Papuans. I love the picture he chose to put on his Facebook profile:

And I was not disappointed by the meeting, during my stay at the Sorido Bay Resort!

Max Ammer is an extraordinary man, in the true sense of the word. As for her life, she could inspire several novels ...

Storytelling is something he excels at. At lunchtime, he is often in a talkative mood and likes nothing more than to amaze his audience with funny or tragic stories, whose fall he carefully guards. You can tell when he's preparing his little effect in the middle of a tasty anecdote: he has a smirk on his face and a curling eye.

Almost every evening, he joins us at the big table in the restaurant, sometimes with his two teenage daughters (as I said above, the article was first published in 2012, they are now adults). One of them is called Melissa. All the tourist-divers of Raja Ampat know his first name without necessarily having met it, because of the Melissa's Garden site, a magnificent coral garden (photo below).

It was Max who gave their names to almost all the dive sites in the area!

His innumerable stories about Raja Ampat showcased primitive tribes and unexplored jungles, biologists discovering new animal species and Christian missionaries ... But also a lot of anecdotes about the wild animals of the area, among which cassowaries killers and dangerous sea crocodiles - he told me this story attack against a diverwhere the guy got away with sticking his finger in the crocodile's eye!

Born in the Netherlands in 1961, Max Ammer spent part of his childhood in Nigeria, and became an adult in Indonesia, a former Dutch colonyHe is a history buff, but he is also an enthusiast of mechanics, aeronautics and motorcycles, preferably Harley-Davidsons, which he once even traded in spare parts for the Harley-Davidsons.

In 1989, he landed for the first time in West Papua, on the edge of Oceania and Asia. He discovered the natural riches of the underwater world of the Raja Ampat, without losing his taste for the scrap metal that has been swallowed up since the Second World War - an unusual hobby, which remains his favourite pastime to this day.

In the following years, he followed underwater explorations with other adventurous divers. At the time, there was nothing: you had to camp on the beaches, bring a compressor and provisions. In 1993, he created his diving operation, which became Papua Diving.

Max is also a very believer. An Adventist Christian, he is carried by a deep faith - a faith capable, obviously, of raising mountains, in this area of Indonesian Papua where are mixed animistic, Christian and Muslim beliefs. At Papua Diving, we respect the Sabbath The weekly rest day for the staff is Saturday, and on this day the dive boats stay at the pontoon.

But Max Ammer is first and foremost an ardent defender of nature. He is involved in several large-scale environmental projects in Raja Ampat, involving the local Papuan population, notably with the non-governmental organization Conservation International, within the Raja Ampat Research and Conservation Centre (RARCC).

On the subject of the incredible biodiversity of this wild archipelago, it is inexhaustible. He continues to be fascinated as a kid by the wonders of nature that surround him, which makes him terribly friendly.

He has been living in Indonesian Papua for almost thirty years now, with his family, which was founded there. On Kri Island, all human activity revolves mainly around the two Papua Diving resorts he has created: first the Kri Eco Resort, in 1996, with its traditional wooden bungalows on stilts and dried palm leaves (photo below)then the most comfortable Sorido Bay Resort in 2004, where I had the chance to stay.

Everything is built with local materials, always in the concern to respect the environment.

On the spot, it employs a hundred people, mainly Papuans, for the two resorts and the organization of the dives, as well as for the various programs of conservation, development, construction, eco-tourism ...

In Raja Ampat, Max Ammer regularly receives visits from scientists and biologists, photographers and documentalists, and television crews from around the world.

I'll put below an excerpt from an excellent documentary for Arte, The coral paradise of Raja Ampat (2009, directed by Rolf J. Möltgen), which presents the work of several scientific teams. Max Ammer and Kri Island can be seen from 9 min. 30 sec. onwards.

One night, Max tells me about the time when they hosted a TV guy's crew, many years ago, whose name he can't remember, but who I must surely know, he says to me: "A guy from the French TV..." Ah, ah, ah! I'm laughing: "Nicolas Hulot? For Ushuaïa? » Right in the target.

I think I'm very lucky to have discovered Raja Ampat other than through the small screen. And to have met the amazing Max Ammer in the flesh. A man who is quite gifted, in his genre, for authentic "thrill" and "emotion" sequences.

Update 2020. TF1 devoted a report to Raja Ampat in its program 7 à 8. Broadcast a first time in January 2020, it is for the moment still visible on the site of the channel, at the end of the link below. We can see Max around the 18e minute:
➜ These French people who live in Raja Ampat, the paradise for robinsons

Some links about Max Ammer