During the day, turtles from Derawan Island swim under the pontoons. At night, they lay their eggs in the still warm sand.

In Derawan, a small island on the east coast of Borneo, Indonesia, life is simple and rustic, facing the sea.

The village, with its wooden houses on stilts, must be less than two thousand souls. We walk around the island without hurrying in less than an hour.

Derawan is Turtle Island! A small WWF center, located at the losmen Danakan, where I was staying, takes care of their conservation. 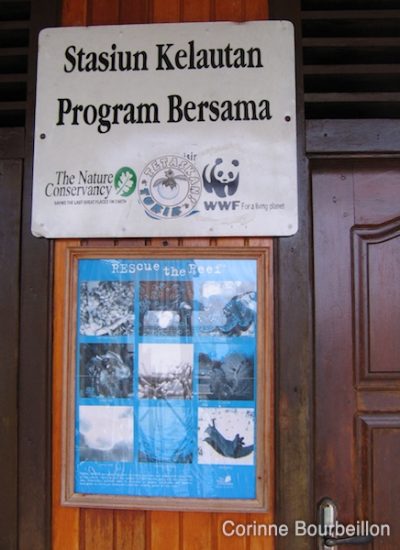 In the evening, we see young people working for the center leave, with a long metal rod to search the sand and a flashlight.

Every night, they walk the beach to harvest turtle eggs.

When they find them, they put them to hatch, sheltered, in a small incubator installed near the Derawan Dive Resort.

A few weeks later, when the eggs hatch, they release the baby turtles at nightfall.

I had the chance to attend the event, along with Paul and Becky, my English friends, and Margot, another French woman who was staying with us at the Danakan losmen. One of the young guys from the WWF Center had arranged to meet us, saying that they would release the little turtles at 9pm.

Once is not customary in Indonesia: for the release of turtles, it's time... And we arrived just in time on the beach to see the tiny creatures dashing boldly towards the waves.

It's a moving spectacle to watch these dozens of baby turtles wander the waves in the dim light.

You have to turn off the lamps, limit the photos because of the flashes... It disturbs the little animals, which then start to climb on your bare feet, magnetized by the light. Above all, don't move, so as not to risk crushing them!

The immense, dark sea soon takes them. Barely 1% will survive. They have no shortage of predators. At this age, they are easy and fragile prey.

Small turtle will become big, as long as God gives it life ...

In Derawan, evening and morning, when I take the cool on the terrace of my room on stilts, I hear the breath of turtles coming to breathe on the surface. 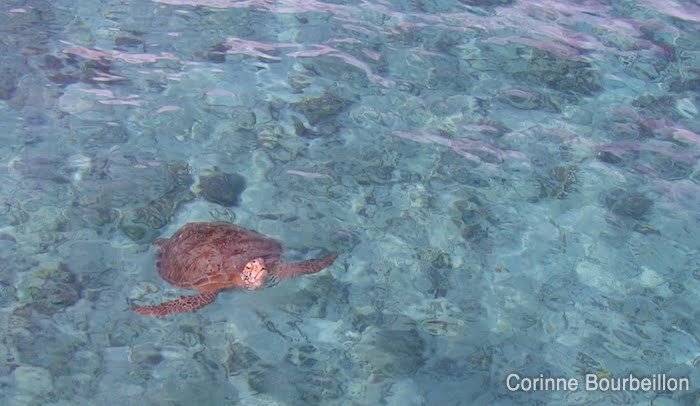 Every day, you can swim with them, observe them just with a mask and a snorkel. Derawan's turtles are not shy. 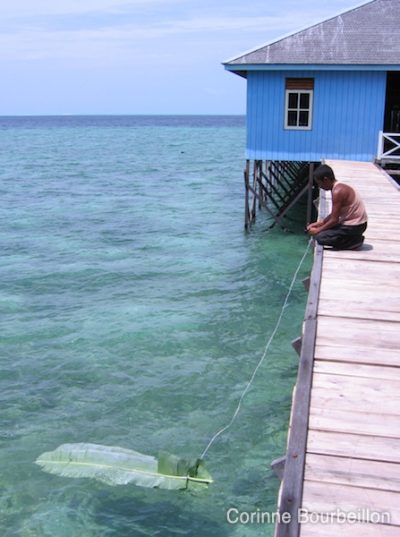 It is true that they are pampered here.

At Losmen Danakan, as soon as new tourists move in, Harris, who runs the guesthouse with the nice lady called Mama Rina, hangs a banana leaf on the end of a string to attract the turtles.

Obviously, they love it, because it works every time! One or even two turtles soon approach and shamelessly graze on the leaf.

On the pontoon, newcomers, young and old, rave about.

After a few days, we get used to it. But if amazement is dulled, wonder remains.

I did some dives on the reef of Derawan, near the pontoons.

Visible not terrible, "muck-dive" atmosphere (with lots of nudibranchs and small creatures nice to flash). But, each time, there too, we are almost certain to come across one or more turtles... I'll post a short underwater movie soon.

The abundance of turtles in Derawan would almost forget that they are threatened.

This is the second time that I have witnessed initiatives in Indonesia to protect them (remember the turtle nursery Pemuteran, Bali). Drops of water in the ocean, unfortunately ...

Indonesian law prohibits the fishing of turtles, whether for their meat or the shell of their shell. But illegal fishing continues. Moreover, in Derawan itself, there are shops and street vendors offering you various tortoiseshell baubles.

I invite you to watch this short movie from WWF below. It reviews the threats to turtles in the Coral Triangle, which covers the seas of the Indo-Pacific zone dear to my heart.

Even if you do not understand English, the beautiful underwater images are sufficient on their own. You will also be able to see the scene that I describe above, when baby turtles rush towards the sea ... Initiatives carried out in the region of Berau (area where Derawan belongs) are also cited as an example.

→ WWF: Protecting marine turtles in the Indo-Pacific (in English)

→ Blog of Marjolinj Christianen (in English) [Remember, this is the young Dutch girl I met in Derawan, who studies algae and turtles for her doctorate ... We became "sisters in pain": a few days after me, she too made sting with a stingray stashed in the sand.]