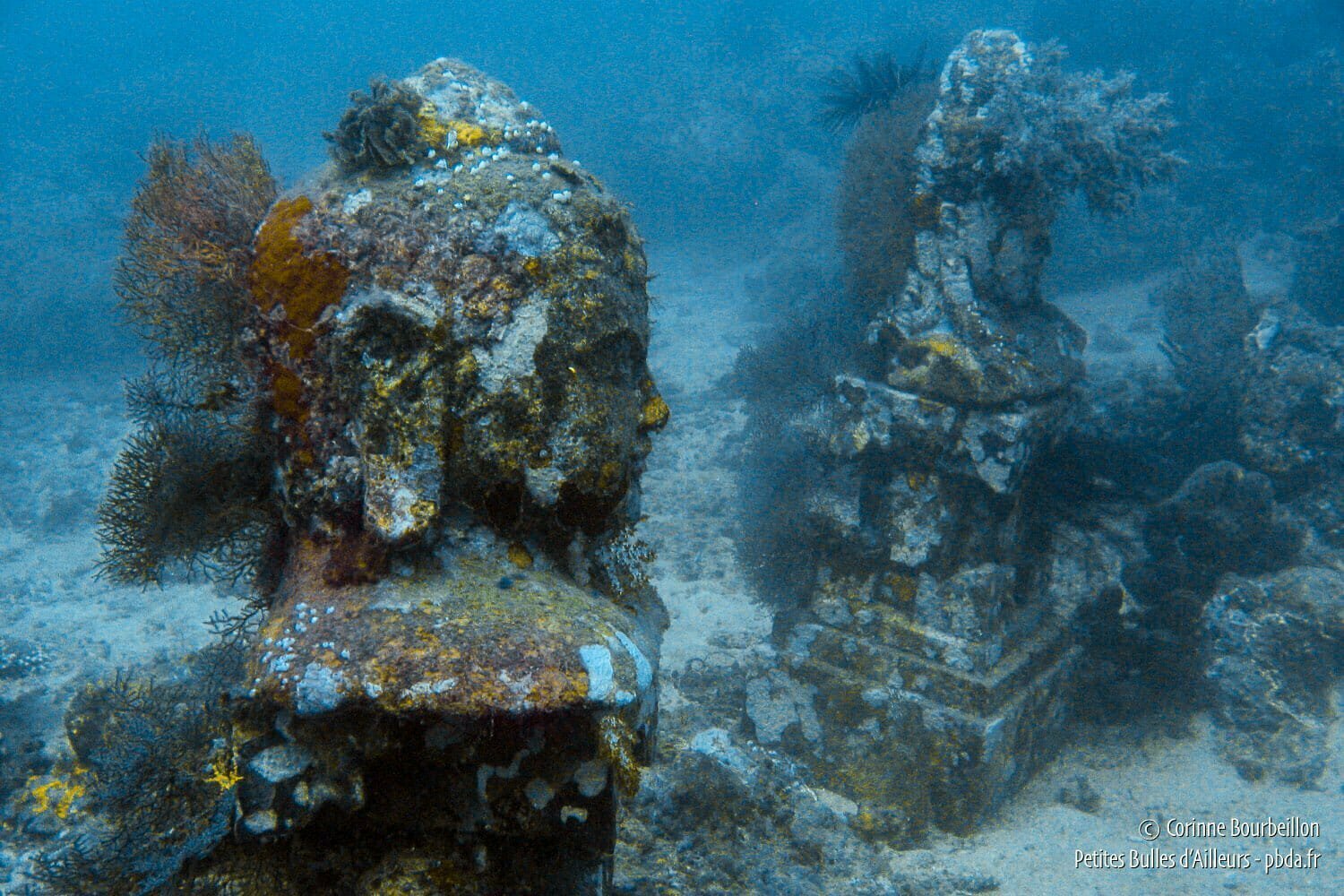 I've been in Pemuteran, a small village in the west of Bali, since Tuesday. I love it!

There is not much here except the fishing village, a handful of luxury hotels, a few cheap family guesthouses, and dive centers.

The whole thing is wedged between a noisy road and a gorgeous black sand cove.

A peaceful and authentic fishing village

We have a beautiful panoramic view of the bay climbing up to the small hilltop temple just west of the hotel zone. A nice walk, easy to walk on, before dusk, when the sunlight becomes soft, and gives a golden glow to the mountains overlooking the bay.

After just go down the steps leading to the temple, and continue by the hard way, to the sea, to return by the beach.

The tranquil and authentic atmosphere of Pemuteran contrasts with the tourist frenzy of so many other busiest corners of Bali. And the people here are super hospitable.

In the evening, at low tide, the villagers gather shells, their feet in the water, between the dead coral heaps on the beach. The kids proudly show me their catch of the day, with big, radiant smiles.

All mobilized to protect the reef

In Pemuteran, all activities revolve around the protection of the coral reef. Since the 1990s, several green initiatives have been successfully launched to raise awareness among villagers and tourists about the fragility of the marine ecosystem.

As in many other places, coral has suffered here from warming water caused by El Niño and practices (no longer in the area) of cyanide and dynamite fishing.

The diving center Reef Seenled by Chris Brown, an Australian settled here for 17 years, started in 1992 on Turtle Hatchery Project (or Proyek Penyu(in Indonesian): a turtle nursery. It is located right next to the bungalows where the divers stay.

The turtle eggs are bought back from the fishermen who find them, then they are buried warm under the sand in the famous "nursery" for 45 to 60 days until they hatch.

The baby turtles then stay in the adjoining basins for 2 to 3 months.

We do not release them right away. The idea is to wait until the babies are big and strong before giving them back their freedom. Young turtles released in this way are likely to have a better chance of survival.

Two adult turtles, named Boomer and Billy, also live there, in Reef Seen pools. The centre has tried several times to return them to their natural environment, but they have never really been released. Each time, they came back!

Unusual: a temple under water

Right next to Reef Seen, there are also Reef Gardeners, Reef Gardeners of Pemuteran a team of young Balinese, who have been trained in diving and sensitized to the protection of the underwater environment.

They harvest the crowns of thorn or Acanthaster, these thorny sea stars corpulent coral. They maintain the reef, which they make discover to the visitors. They created several underwater sites, close to the beach, to promote the regrowth of coral, by submerging boat wrecks on the bottom.

Below the surface, they also built... a temple! An astonishing site, with Khmer-style statues of turtles and Buddhas, on which I dove yesterday. Strange atmosphere, a little ghostly.

It is really a funny thing to evolve like this, between 30 and 15 meters deep, in the middle of these statues covered (entirely, for the oldest) of corals and sea fans. So many solid supports for coral, which seems to be well fixed.

Electric corals in front of the beach

Finally, Reef Gardeners also participated in the artificial reef project Biorock, stimulated by electricity. It is a few meters from the shore, in front of the hotel Pondok Sari. From the beach, we see the cables sink into the water.

Just follow them in palm-mask-snorkel (Snorkel) to observe the metal structures that support the corals. Some are boat-shaped, others flower or pyramid. The oldest are from 2000-2001 and are beautifully adorned with small coral reefs.

The method is simple: branches of coral, which have broken off or become detached from the natural reef, are attached to a metal support that is submerged and run through by an electric current. The result is a phenomenon ofelectrolysis, which allows the limestone of the coral to settle faster. Four to five times faster, according to the young man who informed me at the small Biorock office adjacent to the Pondok Sari hotel.

Some people contest the process: the coral would fix itself more quickly, but less solidly... And it is true that I saw quite a few tables of coral overturned or lying of guingois on the sand, during my little snorkeling trip (flippers-masque-tuba-...). But the reef gardeners are there to fix it all up.

In any case, the enchanting spectacle of these coral groves - a spectacle accessible to all, just a few metres from the shore - is definitely worth the detour! A beautiful initiative, really.

In short, I am under the spell of this beach, where everyone, from visitors to locals, is concerned about preserving the beauty of the underwater world!

And for those who practice diving, the sites of Pemuteran as those of the island of Menjangan, not far, deserve a stay of a few days. 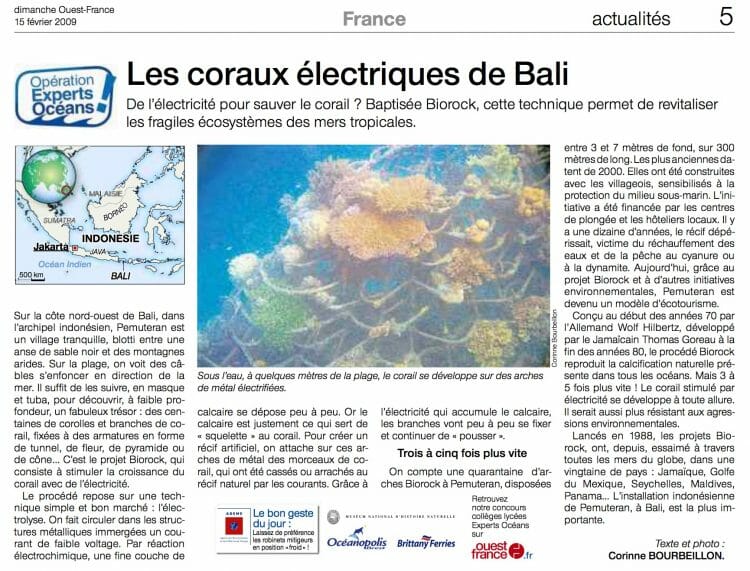 Electricity to save the coral? Called Biorock, this technique helps revitalize the fragile ecosystems of tropical seas.

On the northwestern coast of Bali, in the Indonesian archipelago, Pemuteran is a quiet village, nestled between a cove of black sand and arid mountains.

On the beach, you can see cables sinking towards the sea. Just follow them, in mask and snorkel, to discover, at shallow depths, a fabulous treasure: hundreds of corollae and coral branches, attached to armatures in the shape of a tunnel, flower, pyramid or cone... This is the Biorock project, which consists of stimulating coral growth with electricity.

The process is based on a simple and inexpensive technique: electrolysis. A low-voltage current is circulated through the immersed metal structures. By electrochemical reaction, a thin layer of limestone is gradually deposited. The limestone is what serves as the coral's "skeleton". To create an artificial reef, pieces of coral are attached to these metal arches, which have been broken or torn away from the natural reef by currents. With the electricity that builds up the limestone, the branches will gradually attach themselves and continue to "grow".

There are about forty Biorock arches in Pemuteran, located between 3 and 7 meters deep, 300 meters long. The oldest date from 2000. They were built with the villagers, sensitized to the protection of the underwater environment. The initiative was funded by local dive centers and hoteliers.

About ten years ago, the reef was decaying, victim of warming waters and fishing cyanide or dynamite. Today, thanks to the Biorock project and other environmental initiatives, Pemuteran has become a model of ecotourism.

Designed in the early 1970s by the German Wolf Hilbertz and developed by the Jamaican Thomas Goreau in the late 1980s, the Biorock process reproduces the natural calcification present in all oceans. But 3 to 5 times faster! Electrically stimulated coral grows at a rapid rate. It would also be more resistant to environmental aggression.

Launched in 1988, the Biorock projects have since spread across all the world's seas, in some twenty countries: Jamaica, the Gulf of Mexico, the Seychelles, the Maldives, Panama... The Indonesian installation of Pemuteran, in Bali, is the largest.