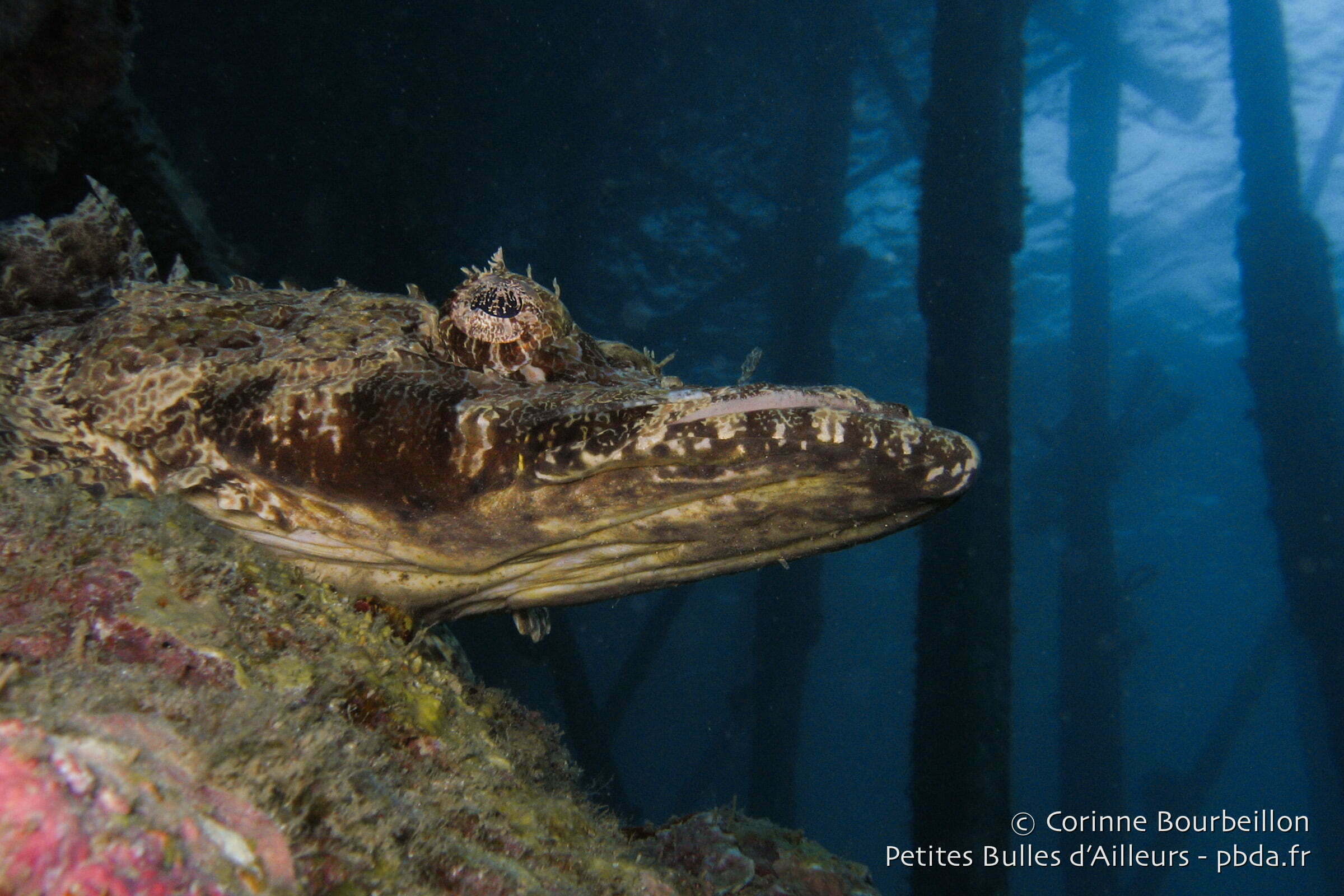 Derawan under the water

Back to Derawan ... under the surface. The reef of the island, even if it is not the most spectacular of the sites of the corner, deserves some dives. The little creatures that I adore abound.

I regret, moreover, not to have been able to enjoy the site more, during my stay there in July. Because of this damn stingray sting, I had to spend three days in the dry time to heal properly ... Private dives! Infuriating.

That said, I would still have managed to cumulate three dives in Derawan itself (in addition to the dives at Sangalaki and Kakaban). Contrary to what one might think looking at the azure sea from the pontoons, the visibility under the water is rather bad around the island, because of the sediments carried by the river basin of Berau, on Borneo. The archipelago is not so far from the mouth.

In diving, we move a few meters from the pontoons of the village. Atmosphere rather "muck-dive", so. Personally, I love. For the uninitiated, the "muck-dive" (literally "immersed in the mud", to understand: in unclear water flush with the substrate) it often means ... that we do not see much! There is fog in the water. The interest of the dive lies in all the little things that hide in the sand, the coral, under the pillars of the pontoons ...

If we just palmer sweeping the entire look, we are inevitably disappointed: it seems that there is nothing special to see. But if we move slowly, taking the time to scrutinize the bottom, we discover wonders. Gobies, nudibranchs, shrimp, crocodile fish, cuttlefish, octopus ... I feasted to hunt down all this little world with my goal ...

Attention to the current!

The dives here delighted me. Especially since we almost certainly cross one or more turtles underwater. They are everywhere and even swim under pontoons, where islanders put banana leaves to attract them.

Caution, however. Depending on the time, the current can become quite strong and surprising ... The tides on these shoals are important and powerful.

Including for those who are content with snorkeling, to the area where there is a beautiful coral garden close to the surface, distrust: during our stay, two very good swimmers from our small group Tourists, at the Danakan losmen, had a hard time getting back to the pontoons.

During my very first dive in Derawan, I was with a couple of Spanish, very great beginners. The current has risen suddenly.

They were trained and our guide Oslan had a good run behind them to catch up, they remained a few moments separated from him, without seeing him anymore, which gave them long minutes of stress. Fortunately, we were at the end of the dive and already in the 5-6 meters zone for a while ...

Near the island, the bottom is about twenty meters, which makes exploration rather comfortable. But be careful not to be caught by the time: monopolized as it is by small animals, we arrive without even realizing the limits of non-decompression ... Better watch his dive computer! Finally, visibility being what it is, I can not recommend too much to stay really close to his buddy. An incident happened so quickly.

During a dive there, my duo of the day, a Frenchman, Guilhem, had a problem with his rental regulator. Fortunately we were close to each other.

Absorbed as I was by a nudibranch that I was trying to immortalize, I did not see anything. It was only when a cloud of sand rose in front of my camera that I looked up. I first pestered internally ... see the kind: "But it's not true, he messed up the picture! "

Because in fact, he rushed on me to grab my backup regulator! ! !

He rips it off, puts it in his mouth and waves at me, his eyes wide open behind his mask, which he wants to pull up. 😯

Unlike the Spanish, it is a diver of good level. He controls himself quickly and his panic is flowing, now that he has air. I let it suck greedily a few bars.

Then we start the recovery, face to face. I control the climb. I see in his eyes that everything is fine now. He confirms it to me several times by sign. We resurfaced well as it should, at the right speed.

I must admit, in retrospect, that I am very very very happy to have followed these damn lessons of Rescue a few months ago! And having repeated, dozens of times, this kind of recovery ...

It was only 8 minutes that we were in the water. We were 20 meters away. Oslan, our guide had disappeared, caught by the underwater "fog". He was not far, though. When he started the climb, we heard him bang on his block, I answered him on mine, but we were already a few meters higher, out of sight, he could no longer spot us. So we waited on the surface. The boat, moored to the dock nearby, took a little time to pick us up.

Guilhem explained that he had a problem with his rental regulator that made him swallow water instead of air ... In the panic of the moment, he did not even think about his own regulator rescue (the octopus, hanging on the side) and so rushed on mine under water.

Back at the dock, not discouraged, Guilhem simply changed the regulator. Then we went back to the water, he did not want to stop there.

We then did a very nice dive. I took lots of nice pictures. But here, I guarantee you that we stayed all well together, this time, to admire the nudists.

Diving and safety in Derawan

Moral: Derawan is a great place to make bubbles, but it's better to have your own stuff. After this kind of incident, which could have ended badly, I know why I am clogging up with the little extra pounds of my darling Legend.

Finally, although I enjoyed my dives with the small "center" of the losmen Danakan, I have many reservations about its organization. Better to be autonomous and able to take care of diving, I would not recommend the place to beginner divers who need to be supervised ... The boss was not there during my stay. This may explain that.

The other option on the island is the Derawan Dive Resort at the other end of the beach, which seems more serious and better equipped (boats, equipment in good condition). But during my stay, no "walk-in" possible. They only work with packages, much more expensive (accommodation + diving), to book on their site or via tour operators (with the inevitable supplement "single").

To find all my articles on this 2009 trip to Borneo, click on the link below:

After this stay that goes back to July 2009, I returned to Derawan in July 2013. This time I was diving with a new structure, which had just opened. Derawan Dive Lodge (created by the Tasik Divers Center of Manado).

They have guides trained and used to driving teams, modern and fast boats, with engines that go well. In short, much better conditions, security issue, to dive around Derawan, Sangalaki and Kakaban ... You can find my articles for this trip of 2013 at the end of the link below: