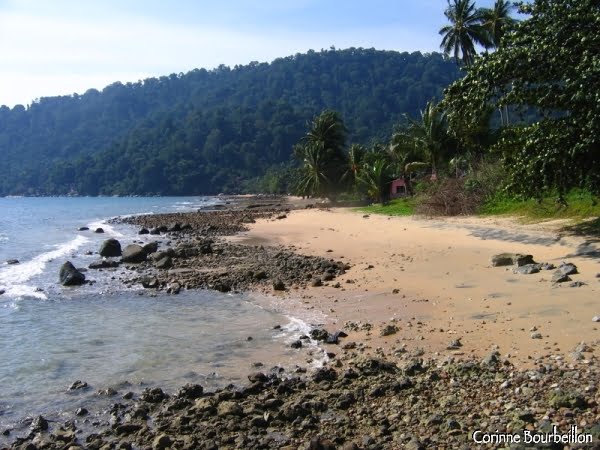 In Tioman, there is jungle, mountains and beaches not yet domesticated ... I love! Here, the beach of Air Batang, also called ABC Beach.

Tioman, the beautiful and wild island

Approaching the island of Tioman (or Pulau Tioman in Malaysian), I have a feeling I'm going to like the place. It's big, huge! In the early morning sea mist, a sloping profile emerges, covered with dense, damp vegetation, where shreds of clouds are still hanging on.

There is jungle everywhere, mountains, beaches still not built too much.

I get dropped off at the beachAir Batang, also called ABC Beachin the northwestern part of the island. This is the quiet beach for budget travellers and from the first steps on the path along the narrow sand tongue, I am thrilled.

It's calm, green, charming. It is far from overcrowded Perhentian Kecil and its alignment of bars, restaurants and cottages.

A Malaysian, advising my dive bag, escorts me gently, with the usual litany of questions (Where do you come from ? How long are you staying ? etc. etc.) to the diving center located shortly after the pontoon.

A young guy is flushing regulators (the nozzle that attaches to the bottle and "relaxes" the air underwater, allowing you to breathe). He greets me in English with that inimitable home-grown accent.

We immediately go to French ... "Decidedly, it's French Week! he told me. There's plenty of them right now." To accommodate me, he advises me the first series of bungalows, the Mawar Chalets.

I go there and put down my bag without hesitation. I visit chalet 6, which has just been released. A deal, for only 20RM (about € 4.50), while I had to pay three times more on Perhentian Kecil to have the equivalent.

A basic bungalow (bed, mosquito net, fan, shower), all in wood, facing the sea, with a small veranda, where I will be able to hang my hammock. That's the first thing I do.

I arrived very early and I have the whole day in front of me to explore the surroundings. I will also register for the next day's dives ...