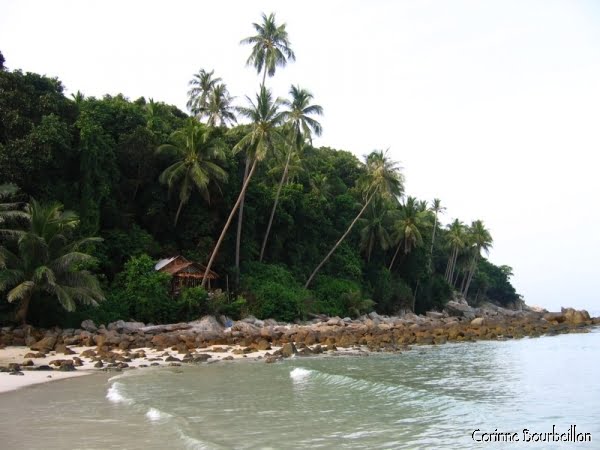 At the end of Long Beach, a secluded bungalow under the coconut trees. (Perhentian Kecil, Malaysia, July 2006)

Here I am at Perhentian Kecil, in the south of Peninsular Malaysia. I explore the island, rather touristy, but very friendly ...


Installation on the beach

At the Matahari Chalets, I am unfortunately given the bungalow located right next to the restaurant. Which means thundering TV from morning till night and being constantly under the eyes of the customers coming and going ... The guy who distributes the cottages promises me another for the next day, customers are on the way out. Good.

The garden where the wooden bungalows are scattered is pretty, well-kept, the welcome is charming. All the staff knows how to say a few words of French: Hello, good day, good day, goodbye, see you soon, etc. In general, the Malayans who shop on the island speak perfect English.

I signed up for the next day's dives at Coral Sky Divers and once I put my bag down, I decided to take advantage of the afternoon to explore the island a bit. It's easy, it's very small.

Two beaches and a piece of jungle

There are actually two main beaches, Long Beach and Coral Bay, separated by a piece of jungle that can be crossed in about ten minutes by a small path. The other beaches and coves, isolated, are inaccessible by the ground. You have to take the taxis.

My first impression is a bit mixed: yes, both beaches are very pretty, but it's so tiny, this little piece of island, that I'm a bit afraid of feeling stuck and going around in circles, in the long run. In fact, I'll find out later, it'll be the opposite: as I'm going to dive every day, meet new people as I dive, I won't see the time go by at all.

Returning from Coral Bay by the little junglesque path, renamed by me "the path of the ferocious mosquitoes", I come across... my Norwegians, Uhle and Teresa! They stopped in the sizzling bush of the trees, rustling with a thousand strange sounds emitted by the insects, to try to take a picture of a varan, which had hidden under a bush.

That's funny, because I just did the exact same thing, right by the beach. These big, prehistoric lizard species are very familiar here. They prowl around houses, on the beach, in gardens, rummaging through rubbish bins... But as soon as you try to get close to them, they scurry away. It's not easy to take a picture of them!

We decide to dine together in the evening, and we spend a pleasant evening at one of the restaurants on the beach, to lock Tiger This is the very first time I've ever managed to drink a beer in Malaysia. Only non-Muslims get the licence to sell alcohol. And it's not always easy to find the bar or restaurant that serves it.

On this beach full of young Anglo-Saxon tourists who have come to party, there is beer everywhere, of course. A lot of Asian tourists as well: Malay, Singaporeans, Japanese, Chinese...