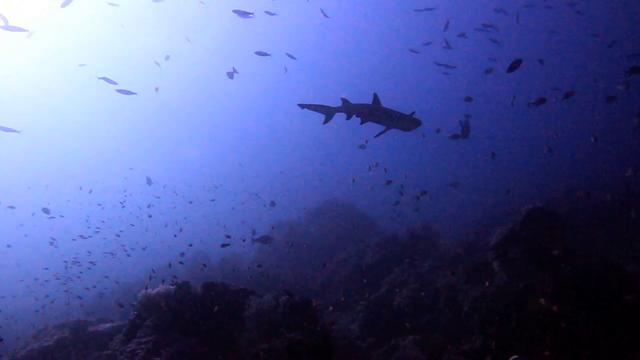 In the remote archipelago of Komodo, Indonesia, there is a dive site with the beautiful name Castle Rock. Its particularity? Sharks love to hang around there... I even made a little video of it.

For divers, this is THE site not to be missed, when you make the long trip to Komodo. Castle Rock - also called Takat Toko - is a pinnacle in the middle of the sea, whose summit is about 7-8 meters deep. In addition to the abundant underwater fauna that gravitates around, there is a good chance of seeing sharks in high doses.

When I get into the water, with Jerome, the dive guide of Pascha, I do not doubt yet the profusion of sharks that turns there ... We go down quickly in the area of 20-25 meters. You do not even have to look for them. They are there.

Here is the ballet of the castle rock sharks, video. I played a one-minute sequence, which gives a good idea of the atmosphere below the surface.

Many white tip sharks (coral sharks), but also some grey reef sharks. And some good-sized specimens... I am absolutely fascinated. Amazed, again.

I am often asked if I am not afraid of sharks. But no. Really.

Never before have I been confronted with aggressive behavior on their part. Bottle releases by scuba divers have the tendency to scare them more than to attract them. As soon as they spot us, the sharks prefer to slightly deviate their trajectory and swim a little further offshore.

At Castle Rock, they pass and repass in the blue, propelled in suppleness by the lateral movement of their tail, indifferent to the furious current which whips the falling. Curiously, it is not seen too much in the image, the violence of the current.

My little video editing on the contrary gives off a very serene impression, I think. It's amazing.

Why I started to crochet

Because if the sharks are swimming effortlessly, patrolling quietly along the reef, for me it's a different matter. For the first time in my diving life, I'm using this trick: 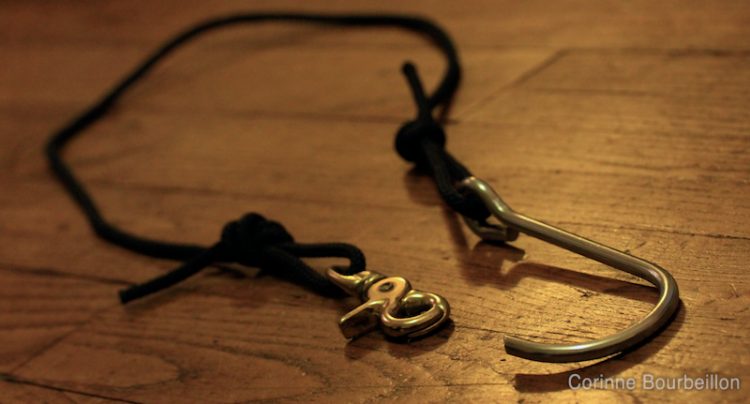 Yeah, a hook. Not to scare the sharks, huh. They don't give a damn about me! But to tie me to a piece of dead coral and avoid drifting away like a straw hawk in an underwater squall. This one stretches the string of our bubbles along a trajectory that's a bit too horizontal for my taste - when it doesn't suddenly make them whirl around.

I fastened the carabiner to the ring of the left strap of my stab (the stabilizing vest, in the jargon of divers). The ring on the right is already occupied by another carabiner, the one that secures the fastening of my waterproof case containing the camera, which also makes video (the Canon Eos 7D).

I'm not used to being hooked up on a wire to float like a small flag in the underwater wind. Being restrained on one side unbalances me. I should have tinkered a system to be able to fix the carabiner well in the center of my paraphernalia.

Fortunately, Jerome maintains a firm grip. Here I am stabilized. Secure. And I manage to make some images that do not shake too much.

Ah, what a luxury to have a guardian angel all to oneself... I exult behind my mask, too happy that there are only two of us, and not a whole palanque!

For other dives, I will regularly go out the hook. I ended up adopting it. It has become indispensable to me to be able to make images in the waters of Komodo, crossed by currents often capricious and irresistible.