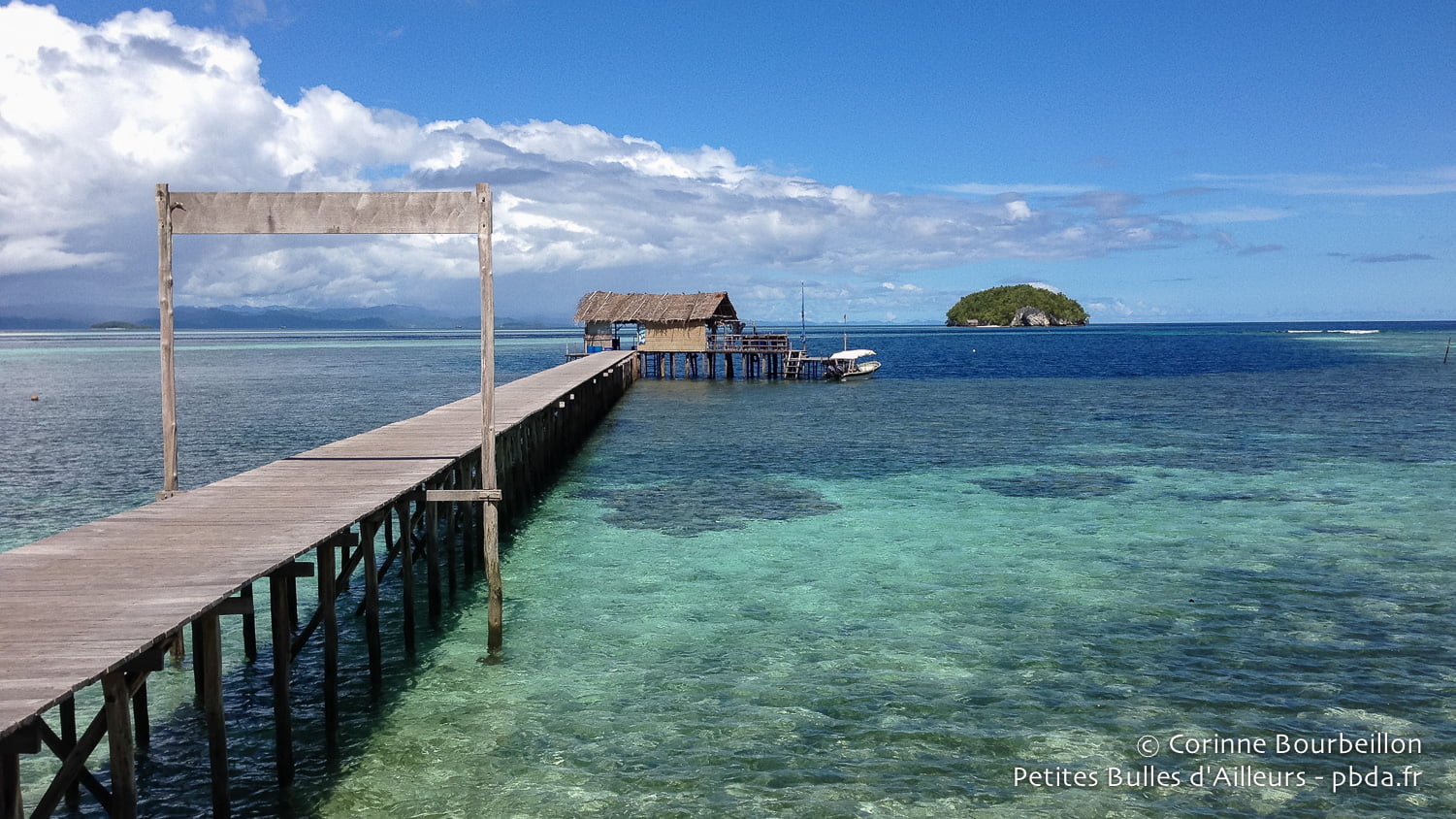 The pontoon of Sorido Bay Resort.

Raja Ampat, my end of the world

"What's up? Tell us! "Telling Raja Ampat, not so simple. I feel like I've come back from the end of the world. I don't know where to start...

Above, the spectacular viewpoint on the islets of Fam, emblematic of Raja Ampat's landscapes... You can see Otto, my great Papuan dive guide, and my partner Sarah.

Raja Ampat, they are crumbs of karst rock covered with primary forest in the middle of a sea of coral. It's an archipelago in Papua, ruled by Indonesia. It's a (still) preserved nature (but for how long?) where the National Geographic comes to film sharks and manta rays. It is a paradise of biodiversity for divers avid for underwater wonders.

I've been there. It's my third trip there!

To reach the island of Kri, in Raja Ampat, I traveled 14,994 km exactly from Rennes, according to the site Tripline with which I drew the route below (click on Show Map). The end of the world.

In January 2015, nearly three years have passed since my very first trip to Raja Ampat. The archipelago is located in West Papua, in the far east of Indonesia. I dream of going back there. That's where I did the most beautiful dives of my life.

I take the plane a few days after the attacks against Charlie Hebdo and the Hyper Cacher of the Porte de Vincennes in Paris. After the horror, I have in my line of sight two weeks of vacation and carelessness.

This departure makes me feel like a balm after these terrifying events. There is something soothing about contemplating the Earth from above, sliding across time zones at night, leaving one world for another. The iPhone turns into a moment sensor.

It's a long journey, therefore. It starts at Rennes station, with the TGV which takes me directly to Charles-de-Gaulle airport in Paris. Approximately 3 hours journey.

First aerial section : Paris-Jakarta via Dubai on Emirates Airlines. About 14 hours in the air and a short stopover in the middle. Upon arrival, I planned a night's rest near the Jakarta airport before taking off the next day for Papua.

Second air route: Jakarta-Sorong via Makassar on Garuda Airlines. Nearly 6 hours in the air with a somewhat long stopover in the middle.

I arrive at Sorong at daybreak. There are only about fifteen minutes drive to the pier and an hour and a half by speedboat to reach my goal: Kri Island.

I'm often asked about the time spent in transport... For this ladled trip from Rennes, it represents about 24 hours in all. With the stopovers and if you allow yourself a night's rest, it takes a total of nearly two days to reach Raja Ampat from Europe! But it's worth it.

During the crossing between Sorong and Kri, a school of dolphins cross our path, as a happy omen. When the familiar triangle of Kri begins to become clearer on the horizon, I can't wait!

I'm going to find the island I've been dreaming of for so long months. I will see again the pontoon of Sorido Bay Resort and its incredible blue hole in the middle of the coral. And then, above all, this fabulous, extraordinary, unique profusion of life underwater. Raja Ampat, finally!

Above, the island of Kri and the pontoon of Sorido Bay Resort.

A little historical-political reminder: the western half of the huge New Guinea Island (formerly colonized by the Dutch) has been annexed by Indonesia in the 1960s (the eastern half became the independent state of Papua New Guinea). At that time, the Indonesian army committed massacres. Today, a Papuan separatist movement continues to take action and the Indonesian authorities do not hesitate to brutally repress any opposition.

In March 2022The Indonesian government's bill to divide Papua into new provinces, without consulting the local population, has provoked a wave of protests, and Papuan protesters were killed by the police. Amnesty International has published a report denouncing the increased repression around the Wabu Block gold mine in the department of Intan Jaya (north central).
In April 2021, military reprisals were launched in the region of Puncak after the death of the head of the intelligence services during exchanges of fire with Papuan independence fighters.
In August 2019, violent riots broke out in Manokwari, Sorong and Fakfak, after the arrest of Papuan independence students in Java, against a backdrop of racist tensions: the government then cut off the internet in Papua and sent a thousand soldiers there as backup.
In July 2017almost twenty years after the Biak massacre (1998), the Indonesian military and police have carried out mass arrests in Nabire and Sentani, whilea petition for West Papua was attempting to bring the Papuan voice to the international stage that same year.

I close this parenthesis, but when you go there as a tourist, you have to be aware that the region is unstable and not quite a "paradise" for everyone...