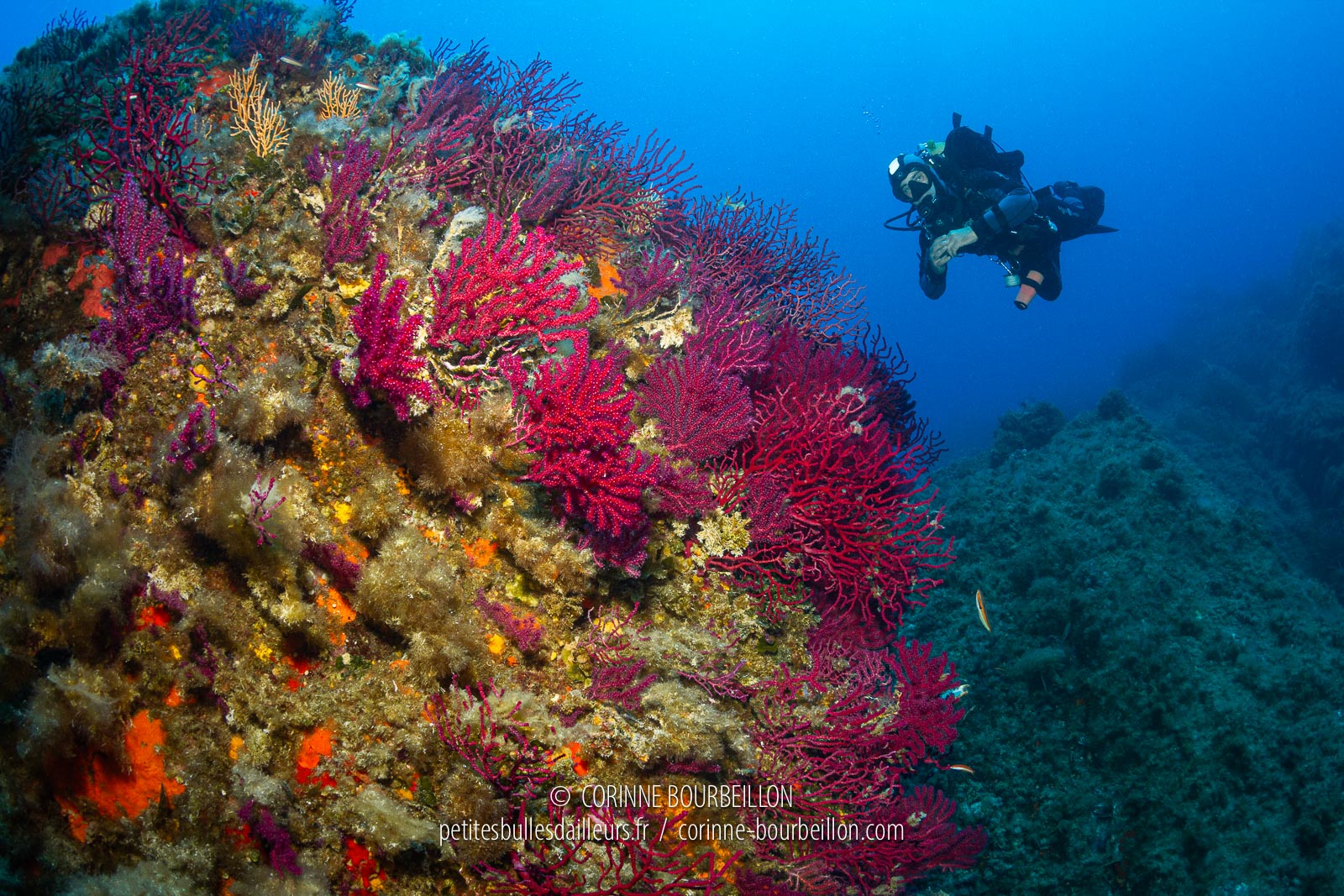 The coral of tropical seas just has to behave itself. The bottom of the Mediterranean looks good, too. The flashy pink evidence at Port-Cros.

Memories of summer 2014: diving in Port-Cros

At the end of July 2014, I was in Hyères, in the Var. And I still can't believe what I saw underwater. When the coral (of red gorgonians) revealed bright tropical hues - pink, purple, red - under my flash, I was hallucinating... 😮

Well, I admit, at first, I'm a little bit wondering what I'm doing here, swimming in cold water, above a monotonous stretch of Posidonia with my 7D…

I start by trying to turn my little friends into graceful shadows on a blue background. Not very conclusive.

And then the bright colors of the gorgonians and the life appeared. There are big placid groupers, which are legion in the area - we are on the site of La Pointe du Vaisseau, near the island of Port-Cros. And then some nice pink nudibranchs, impossible to photograph with a fish-eye. Small schools of bright-silver fish with yellow stripes, whose name I do not know. And even some barracudas on the move! But they are a bit too far away for good pictures...

The more you go, the more I am having fun in this new Mediterranean environment, unheard of for me - the Breton diver who fears cold water and does not palm anymore in tropical seas ... ????

Even posidonia, this aquatic plant (which is not an algae) that I only knew from TV reports, and that I am therefore discovering for the first time with my own eyes, is becoming a fascinating subject, undulating with the swell. A spectacle in its own right, very difficult to photograph...

Gaby, from the À l'Eau Plongée centre (whose name has become Eco Diving), who accompanies me and Christèle, my duo of the day, even plays the models for my lens near the big rock covered with pink coral! Really nice, I appreciate it. 👌

I am transient, but I take it upon myself and persist, at the end of the dive, to throw a few last flashes.

My enemy: the cold

Back on the boat, I am shaken by violent tremors, impossible to repress. My poor 5 mm worn out (I put a shorty hood over it though) and my frail carcass of a cold-blooded woman are not adapted to Mediterranean waters of around 20 degrees on the surface at that time and barely 15-16°C at depth... 🥶

Most of my short stay in Hyères having been devoted to a apnea trainingI only found the time to go on one and only little exploration trip with a tank in the Mediterranean waters... A first in my little life as a diver, I had never dipped my fins in it before! Porquerolles, Port-Cros, the peninsula of Giens : these famous sites in the south of France are really super-exotic spots for me...

I'll probably go back there sometime soon. But not before I've equipped myself seriously, with a suit adapted to these waters too cold for my taste.

Update, December 2022. Alas, the red gorgonians of the Mediterranean have experienced a massive die-off, in this summer of 2022, due to abnormally high water temperatures, caused by global warming. With great sadness, I realize that this article from 2014 is now a testament to what has been and is no more. I invite you to read this other article I just published in the digital evening edition ofOuest-France on the mission "Noah's Ark of the Deep" launched by the 1Ocean Foundation, the CNRS and UNESCO, to study the deep forests of gorgonians (beyond 40-50 meters) which, for the moment, have survived: