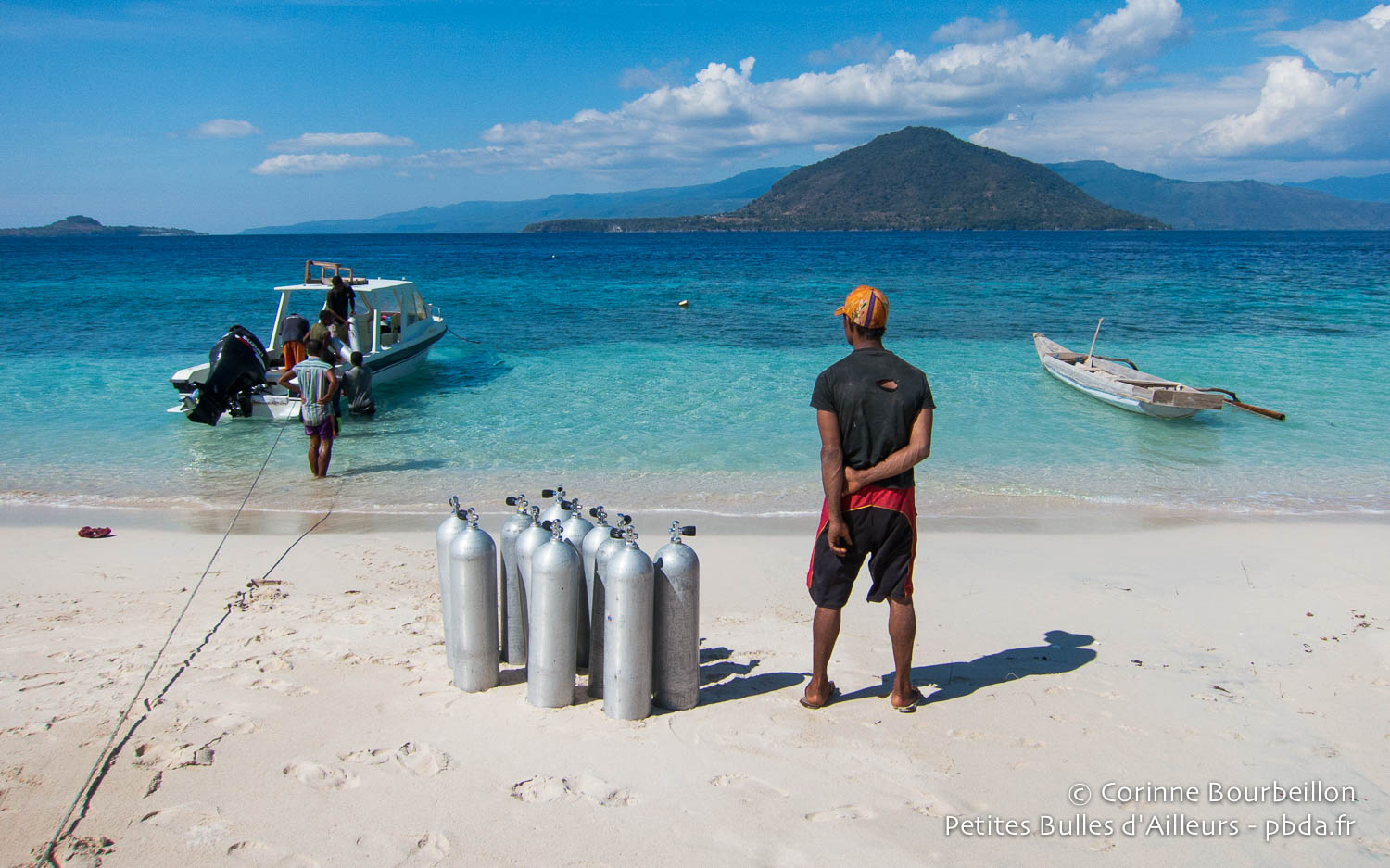 On the beach of Pantar Island. Alor, Indonesia. July 2012.

Alor Archipelago, Indonesia. It is completely to the east, near East Timor. It is far. It's quiet. It's beautiful. And we dive there.

Indonesia does not stop attracting me. I went back there during these July holidays. First step of my journey : So.

Alor is an archipelago still well away from tourist flows, located in what is called the Lesser Sunda Islands.

I was tempted to go there last year already, after my crossing of Flores and my dives in Komodo. I'd given up because there wasn't enough time. But I made up for it this summer!

This handful of islands has rather dry landscapes, but less peeled than Komodo. There are also powerful and capricious currents, tides that are best taken into account, and unpredictable winds. I like that kind of corner, a bit harsh, a little rough, off the beaten track. I am seduced upon arrival.

I live on the island of Pantar, at Alor Divers. A secluded stretch of beach, a handful of simple but comfortable bungalows - raaah, there's even hot water! - facing the sea.

The "civilization" consists of one Muslim and one Christian village on either side of the resort, about 30-45 minutes walk away. The wifi connection available at the resort's restaurant is as weak as it is random.

Anyway, when it comes to peace and quiet, it's perfect. I had to disconnect! 😱 😂

The only noise nuisance: geckos, those little lizards who love to play with their egos at night. My diving buddy Carole appreciates them moderately: well, especially one, who has the annoying habit of wanting to explore her bathroom and wakes her up every night. As she has so much humour, we choke on laughter as we listen to her telling us, day after day, her crazy night adventures with her gecko...

At home, at the bungalow Lumba Lumba- (Dolphins), no nuisances to disturb my sleep. Just the breath of the wind and the sound of the surf. In the morning, dawn is sumptuous.

I had been told that Alor was worth it. That I would not regret having traveled so long to dive. It is true.

Only I dived Komodo (July 2011), and then especially Raja Ampat (March 2012), before discovering Alor this summer. As a result, after such spectacular spots, my judgement is biased. I know, I'm starting to become a "rotten-spoiled" diver.

How can I say ... I was not impressed at Alor as I was at Komodo and Raja Ampat. Admittedly, the sites are very nice, both for the atmosphere and for the macro, with magnificent coral reefs. But I did not have the same sensation of incredible profusion, where we do not know how to give head as there is poiscaille everywhere.

Now that I'm back in Brittany, I'm rediscovering the sub pictures I brought back from Alor. And I have to admit that I have a furious desire to go back there and blow bubbles !!!

I put a small sample below, as an appetizer. And I'll be back soon to tell you the rest!