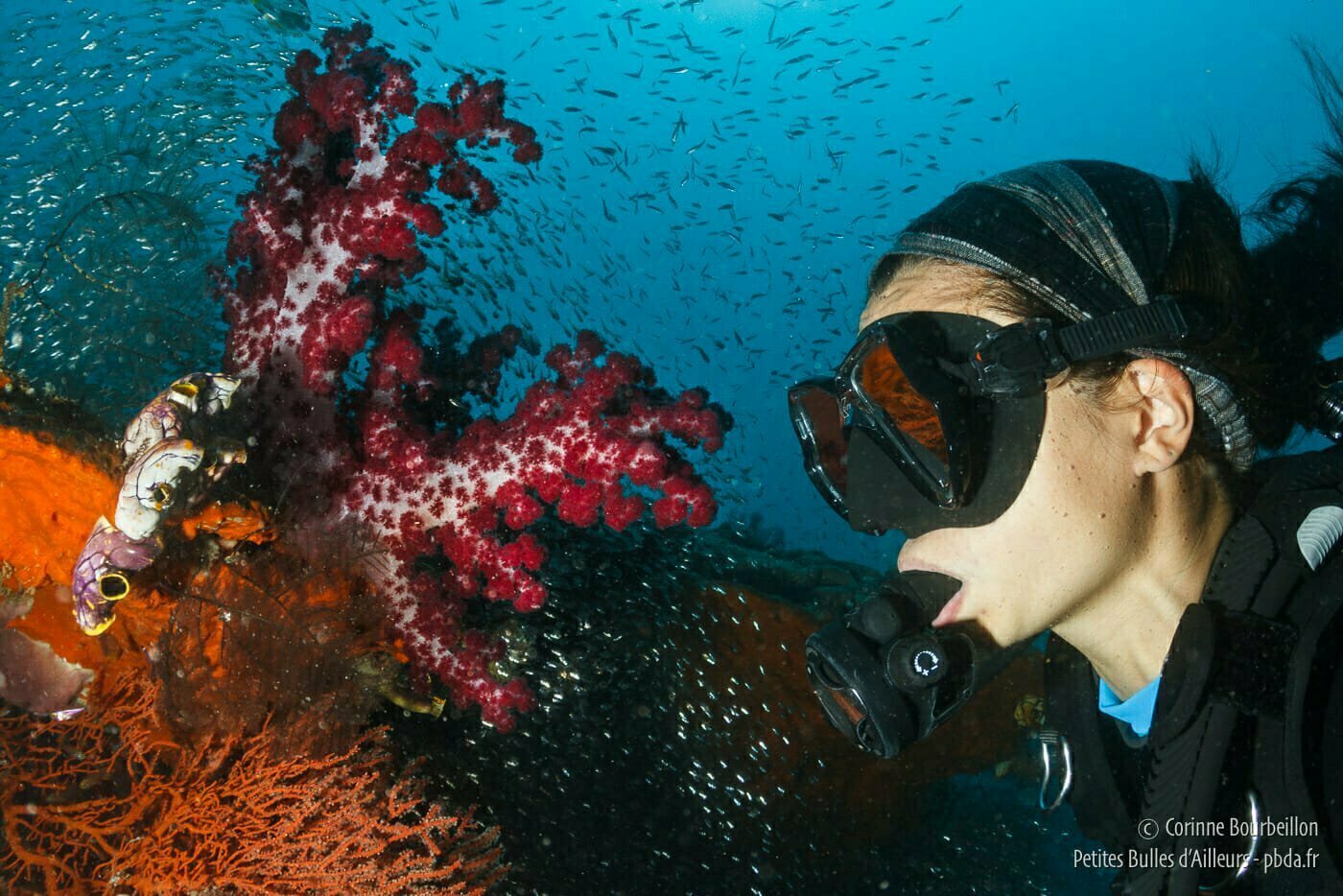 Papua, diving into another world

Papua, Papua in Indonesian. A name full of jungles and beaches, exuberant coral and giant fish. Another world ... which amazed me.

March 2012. The Raja Ampat archipelago, the "Four Kings" is a dream I have had for a long time. A wild paradise. Unique, still preserved.

How do I get to Raja Ampat? I explain everything and I have compiled all the useful information in the article whose link I put below. I have updated and enriched it over the years and my various trips to Raja Ampat (it's official, it's now my favorite diving spot in the Indo-Pacific zone):
→ Raja Ampat: practical information to organize your trip

Raja Ampat is an archipelago strewn with verdant islands, unexplored for some. I spent about ten days there. Half on one boat, the other half on the ground.

The place overwhelmed me. As I said in my previous post...I think it's one of my best trips ever. I have only one desire, only one idea in mind, since I came back: to go back!

But Papua is a long way away. Very far away. It's deep in Indonesia, just east of the archipelago. And we have to investigate several flights to reach Sorong, the "capital"...

Upon arrival at the tiny Sorong Airport [UPDATE: there is now a new, larger and more modern airport]it's already hot. It's only 7am, but it's the hustle and bustle. I think the air is milder than Sulawesi, sweatier than Bali. It is very tropical, very humid, Papua. We are almost on the equator. 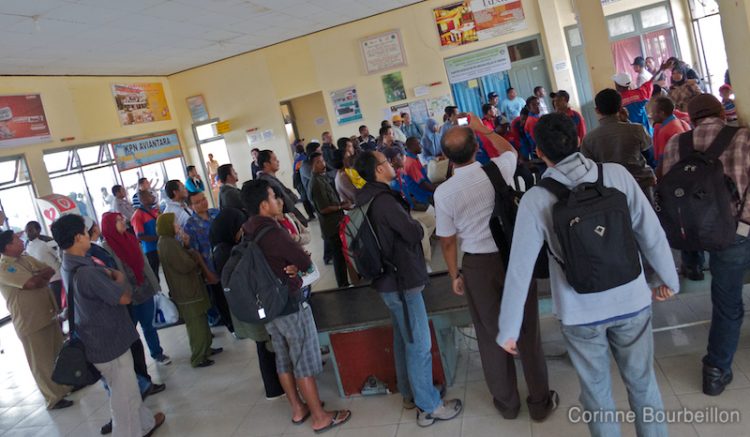 The porters in blue and red shirts rush to the luggage as it is deposited. Men with very dark skin and frizzy hair. The "natives" really have nothing Asian about them. Their physical appearance reminds me more of the aborigines of Australia, the peoples of the Pacific islands... Yes, here we are in West Papua: it's Melanesia, Oceania. The region may have come under the authority of Indonesia in the 1960s, but it's not Asia at all...

A little historical-political reminder: the western half of the island of New Guinea, once colonized by the Dutch, was annexed by Indonesia in 1963. The Indonesians acted as invaders and the army committed massacres. A Papuan separatist movement continues to take action and the Indonesian authorities do not hesitate to brutally repress any demonstration, even peaceful. Just recently, in 2017, almost twenty years later the Biak massacre (1998), the Indonesian military and police have carried out mass arrests in Nabire and Sentani, whilea petition for West Papua is trying to make the Papuans' voice heard on the international stage. I'm closing the parenthesis, but when you go there as a tourist, you have to be aware that the region is unstable and not quite a "paradise" for everyone...

When the plane of Sriwijaya Air begins its descent, after passing the clouds, we see some islands surrounded by turquoise water. 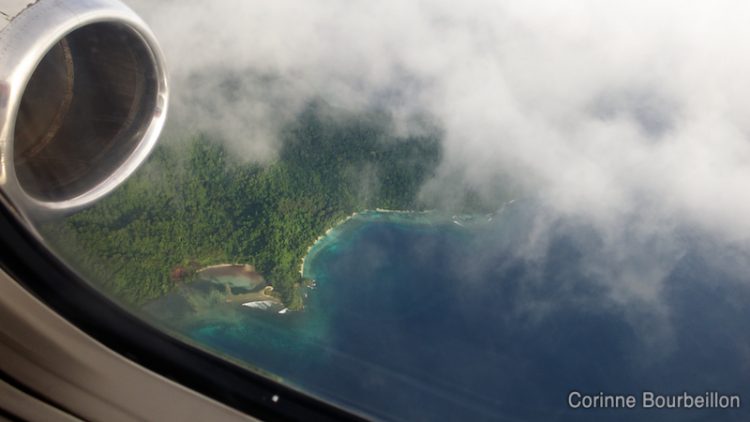 Then comes the coast and the stilted huts of Sorong. Seen from above, a pile of roofs of rusted sheets. In the harbor, many freighters, some abandoned, that rust too. 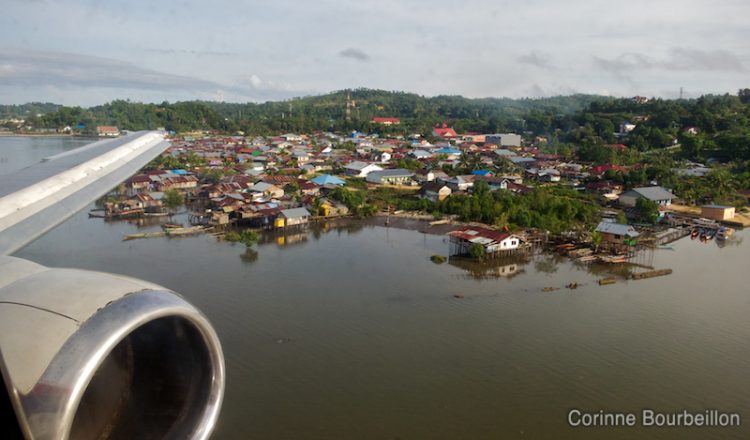 I did not see much of Sorong, which I only went through on the way back and forth, like most tourists who come here.

A formless city, crossed by more or less vague roads, alternating miserable huts and rather ugly concrete buildings. Nothing very attractive, except the smiles of kids playing and passers-by watching you go to the sea. It is an industrial and mining port in full development. And the front door for Raja Ampat.

The wonder comes a little later ...

First on the bridge of Black Manta, the divers boat where I was transferred, with other pale faces disembarked from the plane. 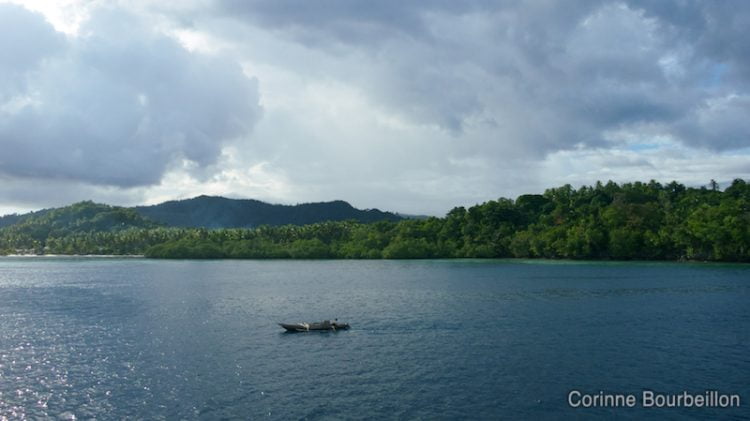 Then under the sea, where we will make bubbles with the fish in water at 29 ° C. 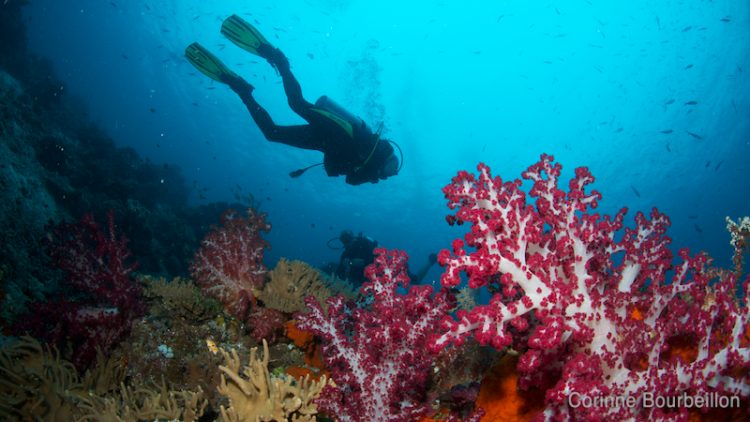 Then, a few days later, from the pontoon of the magnificent Sorido Bay Resort, where I will have the chance to extend my stay ... 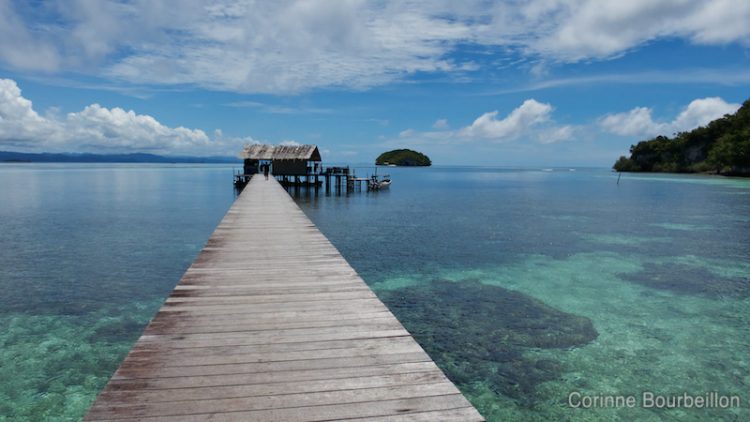 That's right! When I travel to Indonesia, I now metamorphose into a princess. Remember that time I had a boat all to myself, the Pascha, in Komodo ? Once again, for this trip to Raja Ampat, I've had a huge stroke of luck...

I booked a bungalow at Kri Eco Resort, to extend the stay after the cruise. And it's on the Black Mantabetween two dives, that I learn the good news: the Kri Eco is under maintenance, I'm going to be "upgraded", free of charge, to a much more stylish one. Sorido Bay Resort neighbor, who has the same owner.

A princess, I tell you! ☺️ But I'll tell you more about that in a future post...

He's on the line! Read here → Live my life as a princess in Raja Ampat

Raja Ampat on a cruise

Let's go back on the boat, for the first part of this trip to Raja Ampat ...

On the Black Mantawe are 16 divers. A group of 14 Americans, who already know each other. And then my new friend, Miyo, a Japanese woman who lives in Bangkok, a stewardess by profession, and who is like me a dive lover. 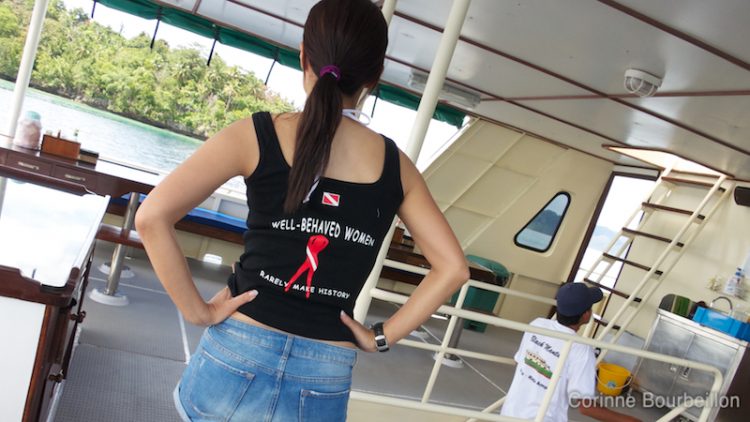 I'm glad to hear that I share my cabin with her. We met at Makassar airport at 4am. Our boarding passes in hand, we were looking for the right door for our flight, a little troubled by the number of the table, the number on the boarding-pass and the number of the sound announcement which were not the same... We started the conversation and quickly became friendly, discovering that we were both going diving, and on the same boat!

The "cruise-leader" of the Black Manta is a Frenchman, Cédric Lesenéchal. Adorable, calm and patient, all smiles, he makes sure everyone is at ease. During the diving briefings, we forget the traditional white board. His trick is to make 3D models of the sites!

On the table, he lays bottles of ketchup and soya, places a jar, spreads a towel on it to create a relief, decorates the landscape with some accessories: felt pens, toothpicks, salt shaker... And that's it, work! 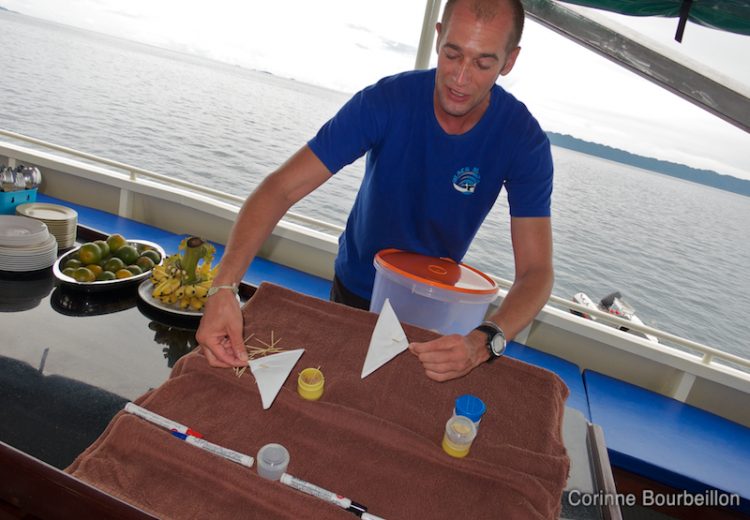 Its biggest success: the briefing for the dives at "Manta Spa", the site where dozens of mantas come to swirl in the divers' bubbles.

Cedric makes mini-mantas in triangle-folded paper towels, with a toothpick piqued in it. Americans love it. Me too.

We'll love it even more when we see the real mantas... Not at all "paper napkin" size, even they don't fit in the picture frame !!! 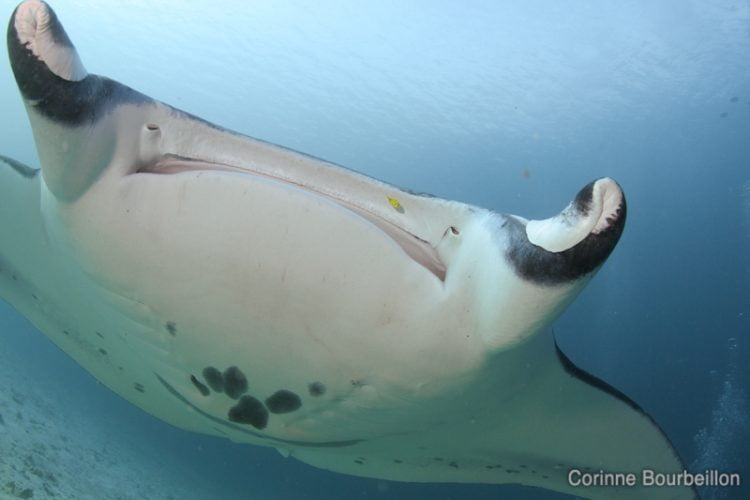 In short, the atmosphere is good. The palanquées are small groups of four. Miyo is shooting underwater like me. We drink at the Bintang, the Indonesian beer, in the evening. The staff of the boat is very caring. Everything is perfect.

And most importantly, the dives are great. Raja Ampat now ranks number 1 in my top 3 Asian sites, ahead of Komodo and Sipadan ...

The proof in pictures... I had already posted a first series of sub pictures, here:

Here's another sample, drawn from the 2383 photos and videos I brought back from Raja Ampat. As usual, a click on the image can display it in large and you can then navigate from one to another with the arrow keys.

I knew from reading it that the underwater "biodiversity" at Raja Ampat was exceptional. Seeing it with your own eyes is something else. Another world, really... 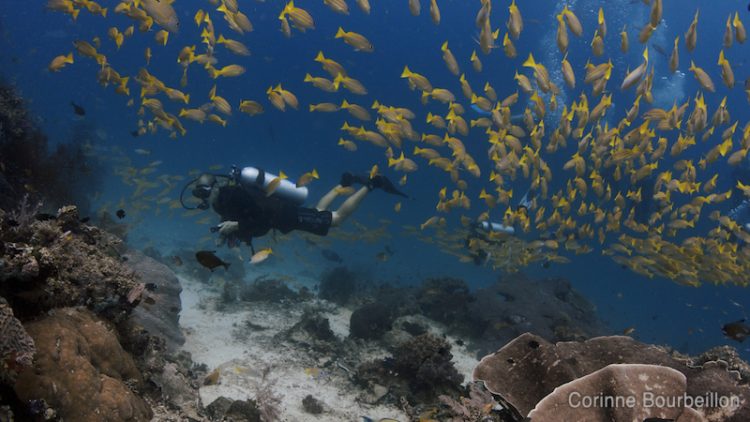 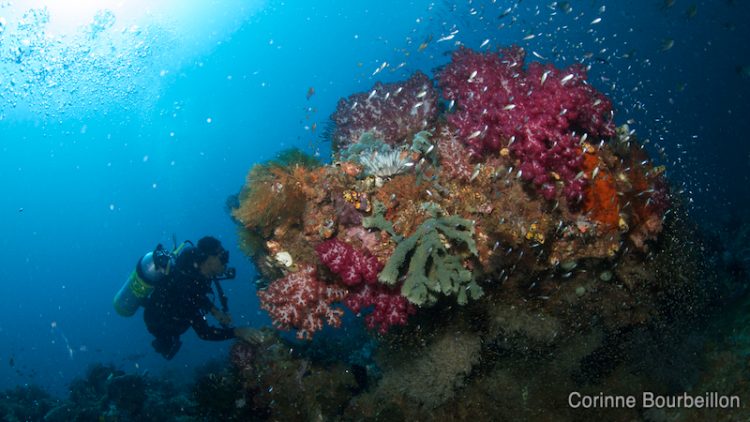 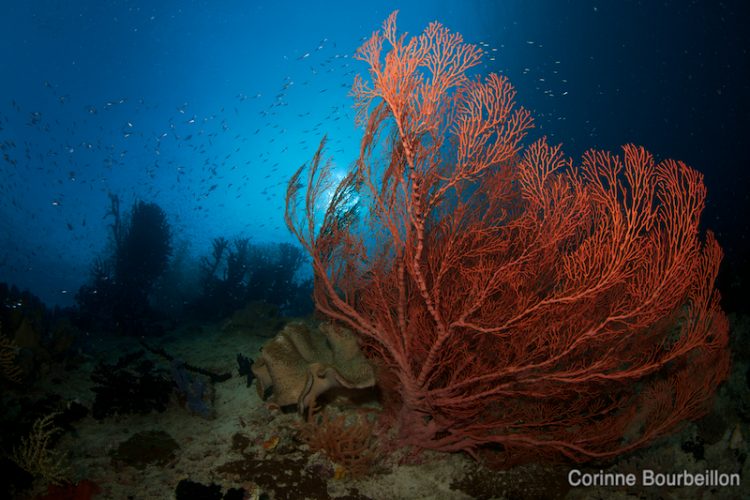 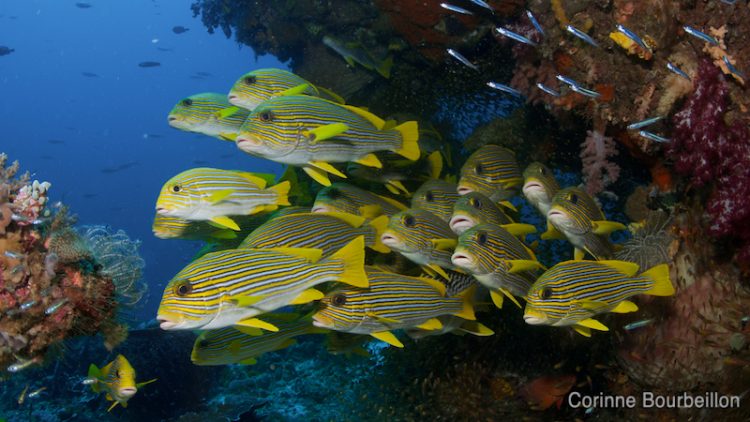 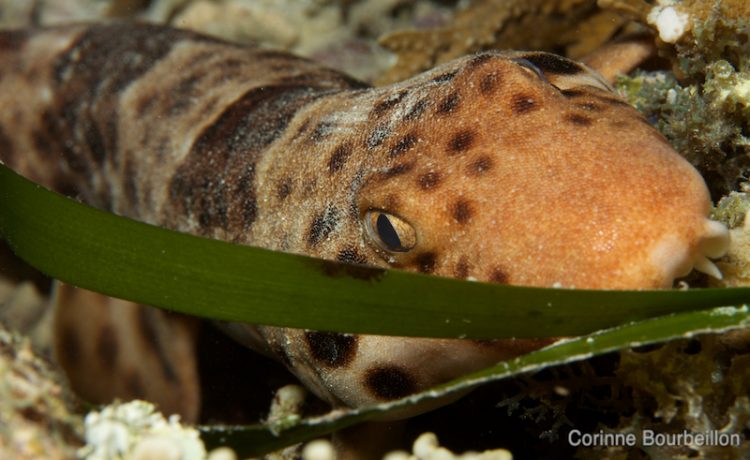 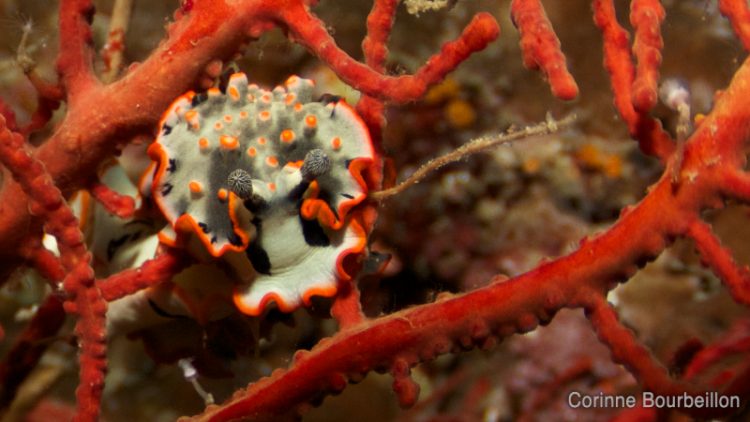 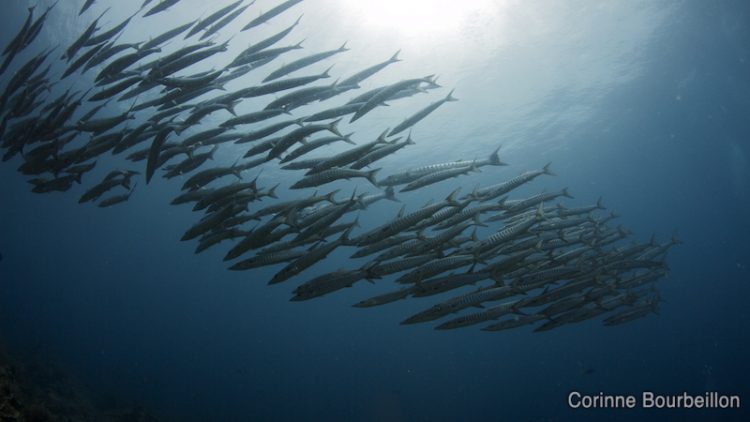 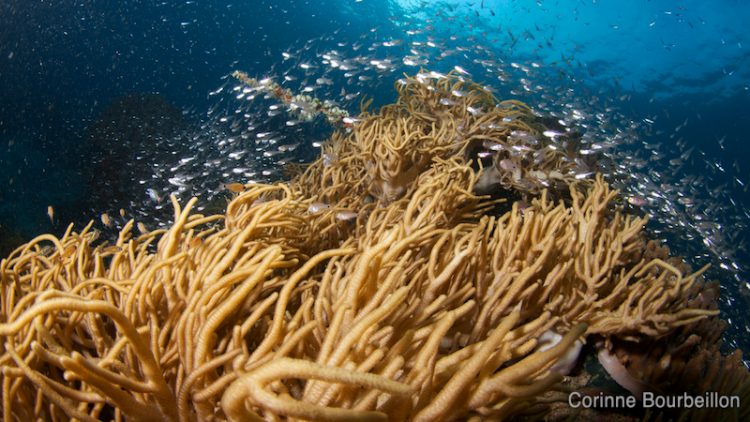 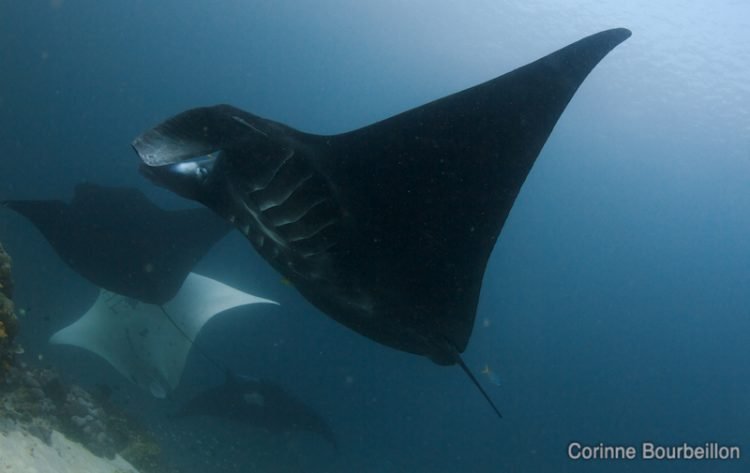 → To see all the articles about my dives at Raja Ampat : one click here !