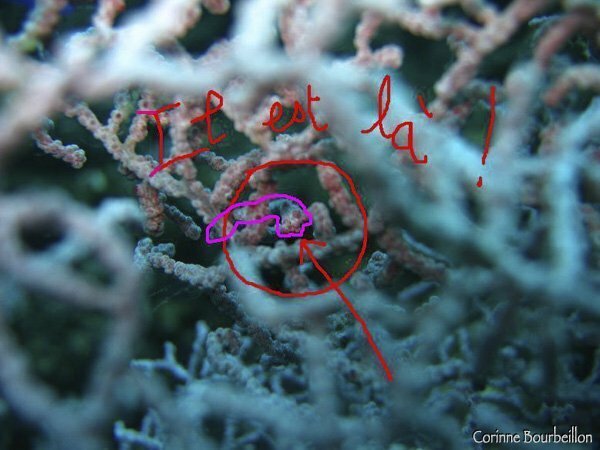 We must have the eye, to locate the tiny seahorse-pygmy!

Here is the pygmy seahorse

Come on, a little article just to help you see the tiny and very shy seahorse-pygmy that I photographed in Sogod Bay....since many of you have been unable to find him.

A tiny seahorse, hiding in the gorgonians...

This tiny "sea horse" lives hidden in the gorgonians, imitating their appearance and colour. L’Hippocampus bargibanti has little pinkish-mauve bumps, to better deceive its predators and... underwater photographers!

I got to admire this one in Sogod Bayin the Philippines, on the southern island of Leyte.

Without our Filipino guide Pedro and his lynx's eye, we would never have been able to make out the beast, wrapped around its gorgonian branch. The famous pygmy seahorse is about the size of my little finger nail...

Obviously, with my compact camera, focusing on such a small subject in the interlacing "branches" of the Gorgonian is a bit of a mission impossible.

Here it is again!

Updated 15 April 2008 : I add the enlarged and processed image on the return, below... The quality is not extraordinary, but it is better to distinguish it, isn't it?

About eight years after this very first picture made at the time with my modest compact camera, I have made good progress in pygmy seahorses... 😄 I invite you to visit the link below, with pictures taken at the Canon Eos 7D, in March 2016, in Triton Bay (West Papua, Indonesia):