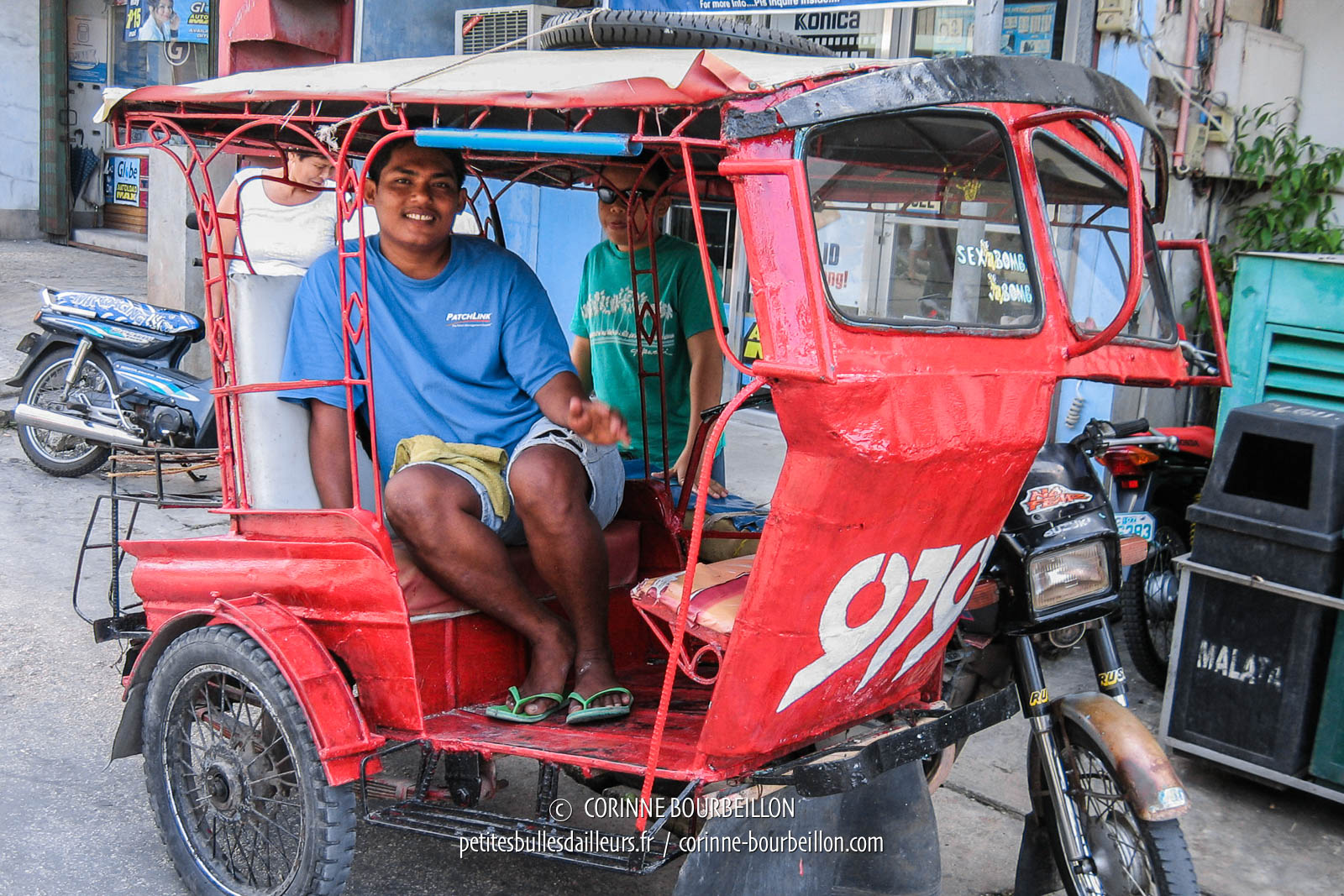 A tricycle in Larena, the port of Siquijor. (Siquijor, Philippines, February 2008)

Filipinos have a way of greeting you. To point out that they have seen you, noticed, seen, to say hello fast by the way, instead of a small nod, or a smile like in Thailand, they raise their eyebrows.

It's also a way to answer yes, to signify your agreement ...

I am happy to find here, in Siquijor, this little brow of eyebrows so particular, that I had noticed in Leyte, but who had disappeared in Alona Beach ...

It's starting to rub off on me, by the way. I start raising my eyebrows when I greet people!

The day before yesterday, I went for a ride on a motorcycle (throughout Asia, the term "motorcycle" refers to any motorized two-wheeler, and when I say "motorcycle" it's actually the equivalent of a scooter). Siquijor is an ideal island for this kind of ride, there is very little traffic, just tricycles and motorcycles, a few jeepneys (jeeps turned into buses) and bicycles. A 72 km road, in good condition for the portion I've already travelled, goes around the island.

You still have to ride quietly, because of dogs, goats, cows, chickens, children who can tumble at any time from the edge of the road, and people in general, because life is concentrated along this road. famous circular road, pompously called "highway"…

So I offered myself a little trip, after the morning dive, to the east of the island. My goal: the beach of Salagdoong.

But I forgot it was Saturday. It's the weekend for Filipinos, too. Many of them came that afternoon, as a group or as a family, to enjoy the charming setting of this small cove with two coves, surrounded by rocks, with incredibly clear water, where you can swim without having to walk far (unlike "my" beach in Sandugan).

In short, instead of the hoped-for calm, there was of course the inevitable karaoke at the beach bar-restaurant, and lots of people in front of the barbecues or under the awnings for rent all around. Atmosphere and crowd much more authentic and pleasant than those of Alona Beach, however!

I found myself again distributing shrugs of eyebrows and "Hello." to the right and to the left. A group of students offered me to join them and a girl even offered me a glass of Tanduay, the local rum (often drunk mixed with Coke) ...

It did not really tell me to swallow rum at that time, so I politely declined the invitation, I had time to take some pictures, to dip, then I continued my journey in the village of Maria.

Maria, her market, her church

Maria has an imposing church and a small market. Flanked by a hexagonal belfry, the church of Our Lady of Divine Providence, built of limestone, dates from the end of the 19th century.e century, shortly before the end of the Spanish colonial period.

Painted on the doors of the double door, the Ten Commandments, in English.

After my short incursion into the church, I wandered a bit to the market, bought some fruit, and then returned to Sandugan Beach before night fell.

At Sandugan Beach, at Islanders Paradise where I live, I have been sympathetic to my immediate neighbors, Marika and Shareef, a young Swiss-Maldivian couple on vacation. We spend a lot of time together, we get along very well.

Like me, they travel according to their desires, without a really pre-established itinerary. Except they have three months in front of them. Result, it's been more than ten days that they tap on Siquijor, so they like it ... Marika is pregnant and does not feel too much the courage either to bang bus or ferry hours in a row. Without being able to dive, she is content to snorkeling (swimming in fins-mask-snorkel on the surface).

Today, another acquaintance, made while diving: David, a young Spaniard, teacher in Saigon (also called Ho Chi Minh City, in Vietnam), as part of a university program to promote the Cervantes language. He also has a lot of time ahead of him and has a date with some friends in Boracay.

In the bungalow to my left, there was a couple of Canadians yesterday. And in Larena's Internet café, where I am, I have already met two French couples, also independent travelers. Siquijor definitely attracts a much nicer tourist population than Panglao ...