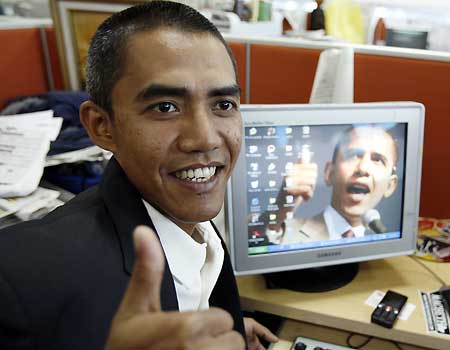 Ilham Anas, 34, Indonesian, is a celebrity in Asia because of his resemblance to the American president. © AP Photo

Obama has a lookalike in Indonesia

After the Indonesian school of ObamaObama's Indonesian look-alike! The man's name is Ilham Anas, he is 34 years old, and works as a photographer for a magazine in Jakarta. His resemblance to the new American president opens up new career opportunities for him, but as a model in advertising. 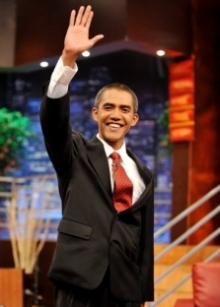 "When Obama was elected, my colleagues made jokes and made me wear a suit and tie and took pictures of me posing as Obama, says Ilham Anas. The photos spread very quickly on the internet. It was phenomenal. I was then contacted by TV stations and an advertising agency. »

And it's true that with the suit that fits well and a big smile, the resemblance is more than striking!

Ilham Anas has already shot a TV ad for a drug in the Philippines and has received proposals in South Korea and Indonesia ... "I'll take every opportunity, as long as it doesn't violate my ethics and values.", says the look-alike.

Still, the new American president is very popular in Indonesia, where he lived a few years during his childhood. His mother had remarried with an Indonesian, after divorcing his father, Kenyan, from Barack Obama.

The 44th American president said that shortly after his inauguration he would deliver a major speech in a Muslim capital, Jakarta? Everyone agrees on that.

The new opening on the world of America, reaffirmed by Obama during his speech last night at the Washington ceremony, is in any case bearers of immense hopes, from the West to the East, the North South.

As for the Indonesian look-alike, he is preparing a good career. Surely, it's better to look like Barack Obama, than to end up in the gallery of Totally Looks Like…

• • • • • • • • • •
ADD: I found this evening two other look-alikes, or trying to be, much less convincing than the Indonesian ...
→ A Cuban look-alike: http://expresse.excite.fr/news/1728/Le-sosie-cubain-dObama
→ A Japanese lookalike (he's a comedian, this one): http://videos.nouvelobs.com/video/iLyROoafYdpI.html