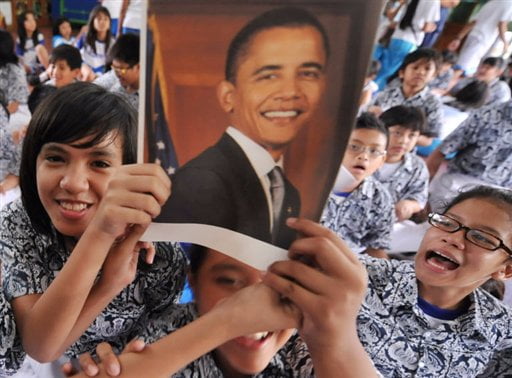 In Indonesia, Obama is the pride of the students of the school in Jakarta where he was in class when he was little. [Photo: Bay Ismoyo / AFP]

The Indonesian childhood of Obama

Barack Obama embodies new hope for Americans and the world. The 44th President of the United States is also proud of an Indonesian school in the Menteng district of Jakarta, the capital of Indonesia, where he was in class as a child.

In a school in Jakarta

I found on YouTube this report in Jakarta, in the school of Obama, shot at the beginning of the year 2008.

I'm not telling you about the pressure for these young Indonesian students... Imagine, a president of the United States wore out his short pants on the same benches as them!

The classes were suspended this Wednesday morning (November 5, 2008), to allow the 250 schoolchildren to follow the electoral evening live. "Obama's example is what we use to motivate students to achieve success."said Senior Deputy Akahmad Solikhin.

But will Barack Obama ever visit his former Indonesian school during his presidency, as the principal suggested to the children?

Barack Obama lived in Indonesia for four years, from 1967 to 1971. He arrived there at the age of six after his mother remarried an Indonesian man. His friends at the time nicknamed him "Barry".

During the campaign, these former classmates made the photo below, to express their support. They even went up a fan club Obama. 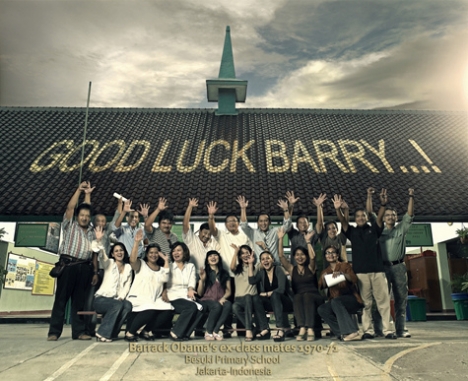 It's funny, this sudden revival of Indonesia's love for America. Indonesian President Susilo Bambang Yudhoyono of course called Barack Obama to congratulate him on his victory, and said at a press conference: "I am convinced that we can improve our bilateral relations. »

Also amusing is the testimony of a member of the Indonesian parliament, Dewi Asmara Oetojo, who was in the same primary school as Obama when he was a child: "It's just unbelievable! We were so young at the time that we never imagined that he had the qualities of a leader. He used to say, "I want to be president." That made us laugh... "

And Oetojo adds that he hopes Obama will remember his youth to be "a different American president." and "to enable Westerners to better understand Asians.".

Added 21/12/2008 : It is to Indonesia that Barack Obama will probably book his first official trip to a Muslim state. We will have confirmation soon.