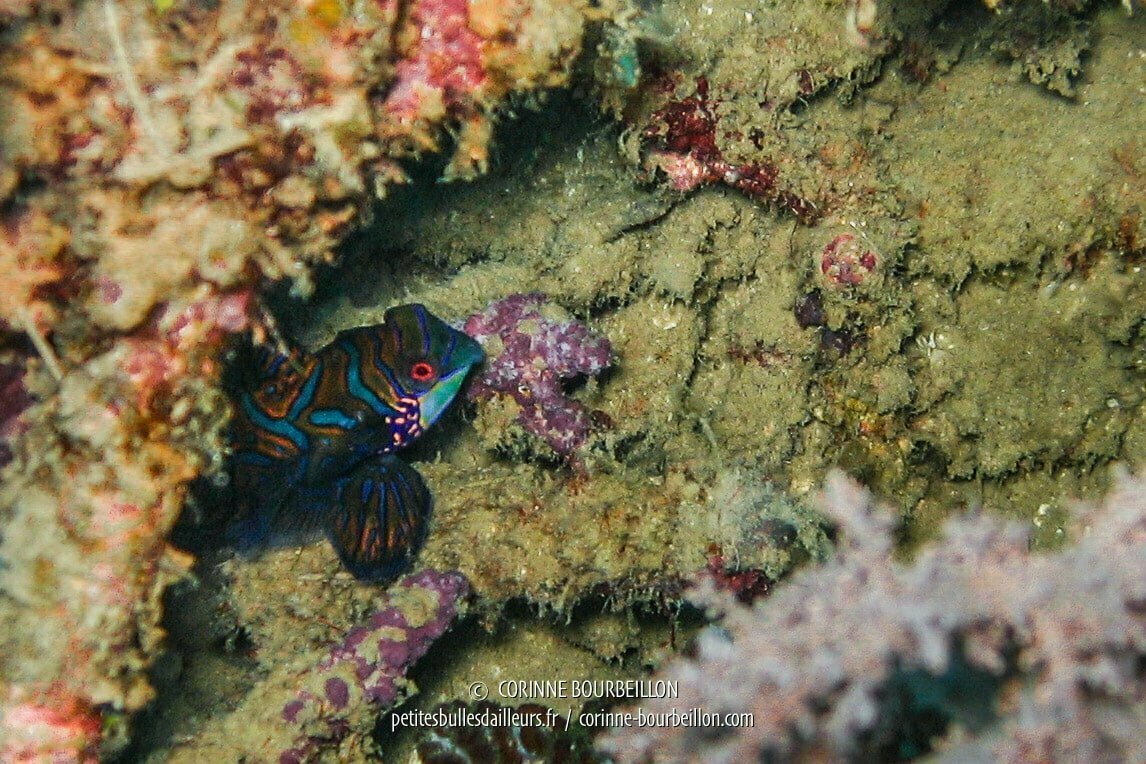 Here he is, the cute little mandarin! He likes nothing so much as to hide under the coral and just show the tip of his nose, just to taunt the photographers ... (Siquijor, Philippines, February 2008)

It is at SiquijorIn the Philippines, I had the joy of photographing my first mandarin fish. What good memories, on this island!

This morning, I left Siquijor and "my" beach, Sandugan Beach, well to regret. People who hold itIslanders Paradise like the Kiwi Dive Resort are really lovely.

I've been here for ten fantastic days! For those of you who want more comfort, there's also Casa de la Playa on the same beach, more expensive but more chic.

Here I am now on the island of Negrosafter a stormy crossing in the true sense of the word. The weather, so beautiful so far, has since last night turned gray, rainy and windy.

In the boat, this morning, there was among the passengers an old gentleman on a drip, lying in a stretcher stuck in the middle of the aisle between the seats, laid there by the local ambulance ... The 45-minute dance of the little ferry in the waves and gusts of wind that shook us on both sides must have been torture for him.

As always, when you take a ferry ticket, you are asked to fill out a small form, in duplicate, with name, age and nationality. A list of passengers, supposedly for statistics. Mmm ... Rather, if the boat would join other wrecks between two islands, in my opinion.

I am now at Dumaguete, on the east coast of Negros, or more exactly Dauin, a few kilometers south of Dumaguete, on a black volcanic sand beach. I have not seen much of the area yet, but for the tourist atmosphere, on the small end of the beach that I traveled, it is very German-speaking, very "fully booked resort" and very "bubble factory."... but I'll talk to you later. ????

I finished my stay at Siquijor by two memorable experiences: an underwater encounter on Saturday with the famous mandarin fish promised by Neal, the Kiwi Divemaster; and cockfights, favorite sport of Filipinos on Sunday (with Mass and karaoke). But I will come back and tell you about the incredible cockpit in more detail in a day or two, thanks to a better internet connection that I have tonight ...

Saturday afternoon so, despite a nasty ear otitis in the right ear and a computer in the harbor (suddenly, Neal lent me his), I went diving. Well yes, it's not every day that we have the chance to admire mandarin fish ...

The ear went down without too much pain, with a few whispers and squeaks, it was on the way up and once out of the water that I understood my pain... Good. I've got the drops to treat all that properly and I don't plan to dive again until the day after tomorrow: that's three full days in the dry, it should be almost healed by then. It's almost back to normal today. In Leyte, the left ear had already been acting up the first week, but within two days it was back to normal. In short, let's close the "diving sores" parenthesis.

We made the "house-reef" from Sandugan Beach, a pretty reef I had not explored yet. The charming little mandarins so coveted were at the rendezvous, hidden under the coral.

Lively, stealthy, they are cute full with their small square head and fins-fans, but not easy to photograph. Especially when one finds oneself to make small yoyos with a recalcitrant ear from one end to the other of a pile of coral that one does not want to strike with the palms ...

But I still managed to shoot one. A bit far. I reframed the image, so that we can see it better that this unfortunate hippocampus-pygmy I had to highlight in pink. [EDIT: I also cleared up the photo a bit later, which was originally a bit dark.]

Still ... I'm pretty proud of myself. This is the first time I've managed to capture a mandarin fish. So, even if it is far from exceptional, I still like it, this photo.

After the euphoria, I went to get my little ear fixed. I still need my eardrums for the dives at Dauin and Apo!