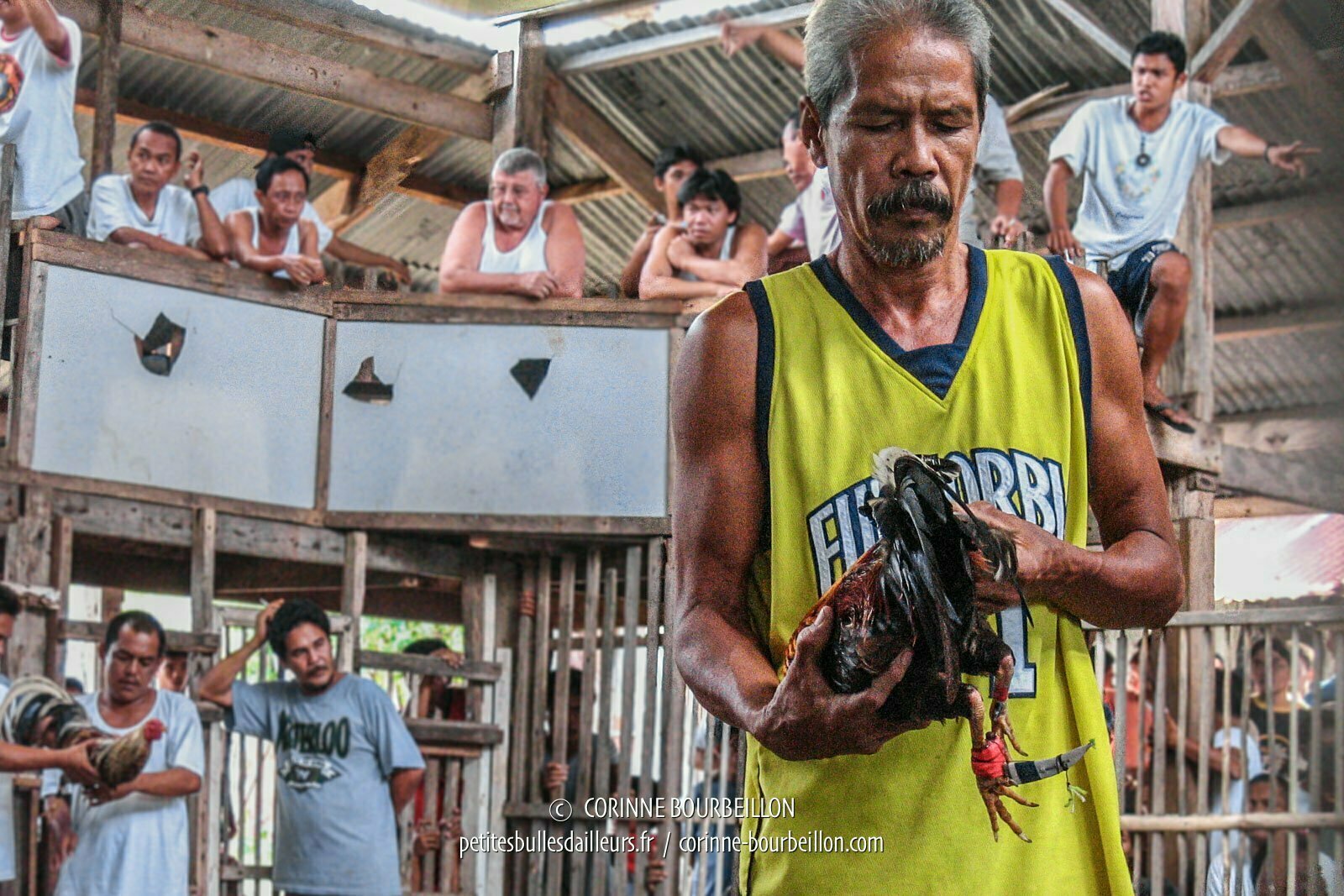 The roosters are armed with a curved blade attached to the paw, protected by a mini-sheath that is removed at the last moment for the fight. (Siquijor, Philippines, February 2008)

In the Philippines, Sunday is often the day of cockfighting. Neal, our dive guide in Siquijorand Raul, who runs the Kiwi Resort, suggested we go and see these bloody avian duels at the nearest fighting cock arena, the cockpit arena from the village ofEnrique Villanueva.

Marika, Shareef and I have gladly accepted this unprecedented Sunday release. To the cockpit arena of the village, the fights follow one another all afternoon. Entry: 10 pesos.

In the small dirt road that leads to the arena, messy motorcycles are already parked. This is to say if the show is popular ...

Well, "show" is a figure of speech. It is obviously not a place frequented by sensitive souls or animal lovers. People mainly come here to bet and/or have their fighting cocks fight. Some bet huge sums and as in all games of chance, you can leave feathers (that's the case to say it) .

Hundreds of guys are there, around a small square arena, surrounded by wooden bars. Few women, the public is overwhelmingly male.

People gather around the fence and it gets excited when betting and fighting. One guy harangues the crowd at the microphone. Everyone gives their voice and we see tickets crumpled from one hand to another.

The fight itself is very brief. Each cock has, fixed to the paw, a long curved and pointed blade, like a little sword. It is guessed sharp as a razor and carefully sharpened for the occasion.

The two cocks are presented to each other, held at arm's length or by the tail feathers by their respective owners. It is a matter of exciting a little bit the critters by approaching beak against beak. They are released for good in the arena when the amount of paris is balanced on both sides.

After, it's going very fast. A swirl of feathers, everyone shouts and shakes behind the wooden bars. In a few minutes, it's over.

One of the two critters remains sprawled in the sand. It's bleeding. If ever the rooster on the ground moves again, we raise it and we put it back in front of the other, just to see if it is still a little fight. If the opposing animal repels the other three more times, it is considered that he has won, as I understand Neal's explanations.

Most of the time, the cock on the ground is already dead. We pick it up to make room for the next fight. A guy goes behind with his brush and shovel to pick up feathers and blood. The air is a bit sticky inside the arena.

UPDATE (May 13, 2008). I put online the video that I mounted afterwards here → Fighting cocks in the Philippines: the video...I'm handing it to you below:

Updated, January 2018 : Sorry for the poor quality of these pictures, shot in 2008 with a modest compact camera, with a video mode at only 480 or 640 pixels, I don't know anymore, at a time when 4K didn't yet exist and when the iPhone 3G was going to become the new fashionable technological jewel?

In the clay courtyard in front, men of all ages come and go, carrying their precious gallinacé in the hollow of their arms: we crouch in a corner to examine the most beautiful fighting cocks, to chat with a neighbour, to carefully tie around the leg the lanyard that is used to fix the blade...

Few smiles here. We are not here to laugh. It takes three years to raise, a fighting cock. With special diet and everything and everything, as for sportsmen. The chicks are sorted from birth. There are farms specialized in this breeding.

On the day of the duel, some owners add alcohol to the mixture used to feed the rooster, to make it more aggressive.

In short, we attended a total of four-five fights, then we dragged a little in the yard among the roosters and people squeezing roosters on their hearts, then again at the exit in front of the fish merchants waiting for the customer who bet on the good cock ...

That night, Neal went to the stove to cook us... a chicken! An indirect tribute to all those fighting cocks that went from living to dead in the afternoon. 😉 (Barnyard humor...)

Too good his chicken, simmered in a kind of spicy, Filipina-style stew! We enjoyed it.

In any case, this bloody debauchery of poultry in the arena hasn't spoilt our appetite after all. This Sunday evening dinner was also a farewell meal for me before I left. A very pleasant conclusion to my little stay in Siquijor.