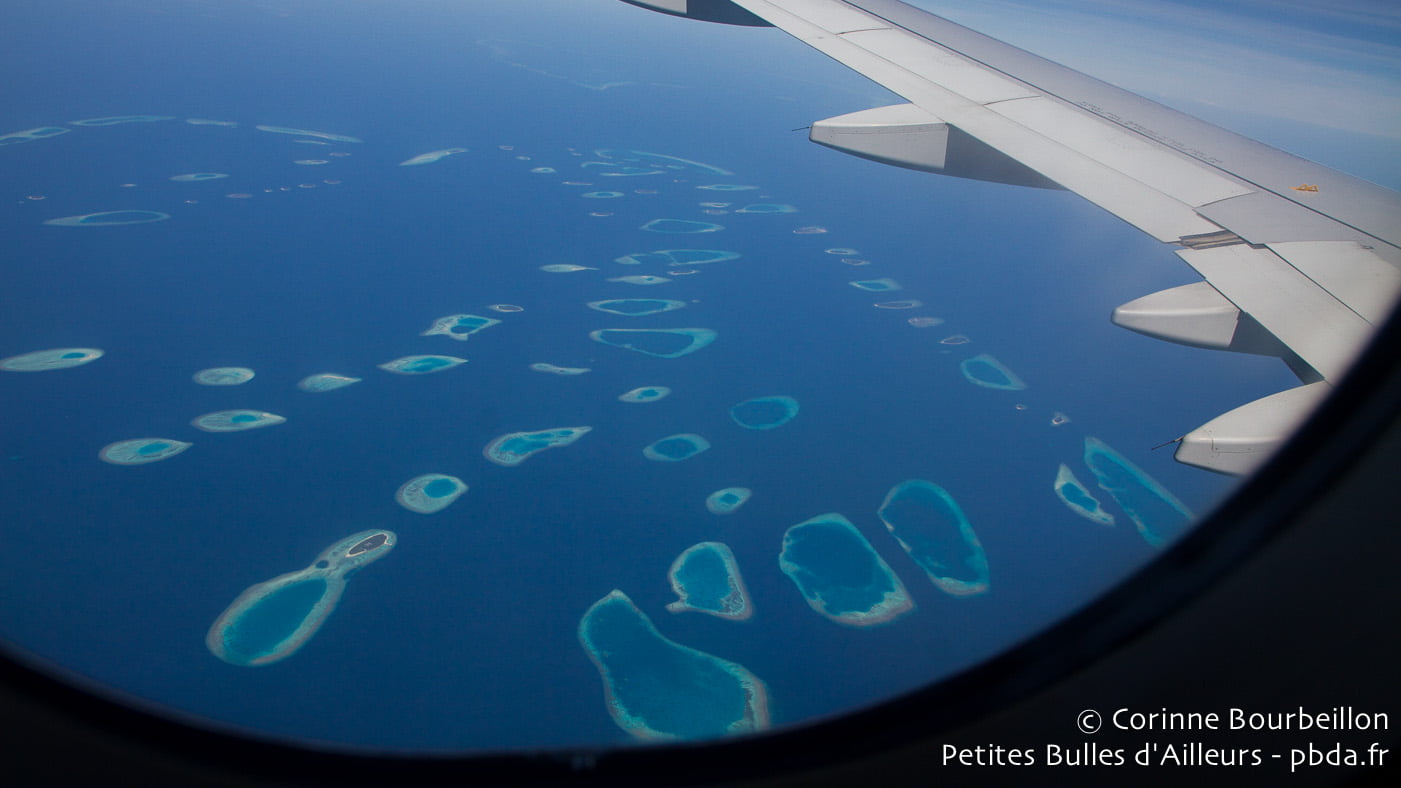 Maldives, at the water's edge

I've been dreaming about it for years. I'm in! The Maldives... A gigantic archipelago at the water's edge, spectacular from the moment you arrive by plane.

The destination is a new one, on Bubbles Underwater & Beyond ! I'm in the Maldives for two weeks, in this month of February 2014.

The archipelago consists of 1,199 islands, according to Wikipedia, 202 are inhabited. Crumbs of coral land scattered in the Indian Ocean, southwest of Sri Lanka.

Without a good internet connection, it will be difficult for me to post "live" articles about this new trip. But I will try. Here are already some pictures of the Maldives seen from the sky... I chose a window seat in the plane, so as not to miss anything of the show.

Like in French PolynesiaI'm going to get more blue in my eyes... It's beautiful !!!!

What is most striking when you fly over them is the fragility of these islets at the surface of the water. Their sand and coral barriers seem derisory when compared to the enormous, fiercely blue ocean.

At the time I post these lines, my stay is already well under way ... I just spent a few days in a nice guesthouse, Asseyri Inn, located on an island in the very north of the Maldivian archipelago, Hanimaadhoo. It is an inhabited island, with a village and "real" people, not a luxury hotel island exclusively reserved for tourists.

Update - January 2017 : the guesthouse Asseyri Inn as I knew it no longer seems to exist. The website now refers to another hotel, much more chic, located on another island ...

Despite the white sand and coconut palms, Hanimaadhoo and the so-called "local" islands are far from what we imagine in Europe, when we talk about the Maldives. But I will soon write more about the peaceful Hanimaadhoo in a future post. Here, it's just for the appetizer...

Until very recently, contacts between Maldivians and foreign visitors were strictly limited and regulated. But things are gradually changing. As a reminder, the Maldives is not especially the country of freedom for its inhabitants, with a whole bunch of laws dictated by the sharia...

For decades, the Maldives has staked everything on luxury tourism with delusional island-hotels, cut off from the population. The development of more modest guesthouses and accommodation for independent travelers on a lower budget is brand new.

This development was supported by Mohamed Nasheed, President of the Maldives from 2008 to 2012. A young president, forty-year-old, eco-friendly and progressive, who made a lot of headlines in 2009, holding a council of ministers 3 metres underwater, with scuba tanks, to alert public opinion to the rising waters and global warming that threaten the Maldivian archipelago – but he has been ousted from power and thrown into prison since then by the new Islamist dictatorial government...

Dive from shore and cruise

I'm closing the political parenthesis here, to return to my more futile concerns as a holidaymaker and quickly present the rest of the trip... Because it was, among other things, the reputed underwater world of the Maldivian archipelago that attracted me here!

I already dived a bit during my stay on Hanimaadhoo Island, but the best is yet to come...

The second week of my stay will be totally dedicated to diving. On the program: a cruise aboard the magnificent Ocean Divinetowards Ari Atoll !!! It is said that in this season we meet manta rays and whale sharks... I'm waiting to see.