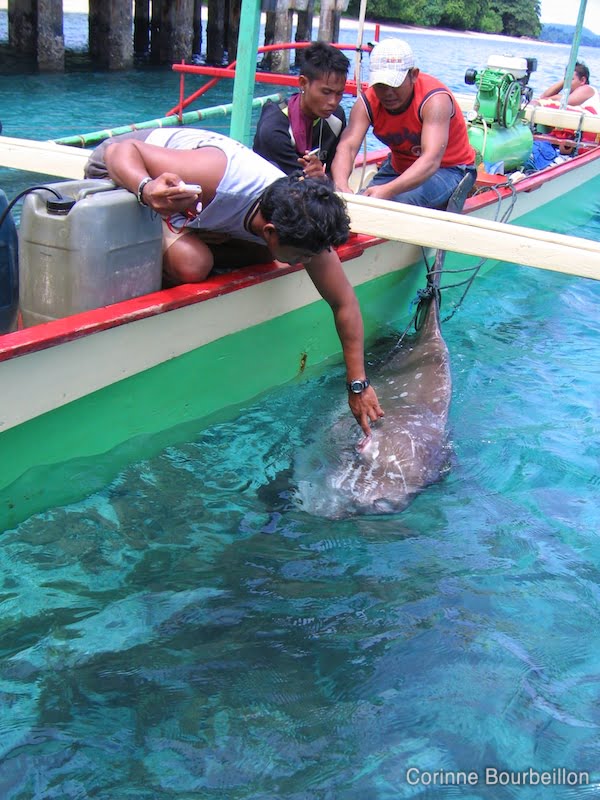 The agony of mola-mola

The mola-mola, that's the big moonfish that I met at Nusa Penida, near Bali, in 2008. This summer, near Bangka Island, in Sulawesi, I saw one again ... in less pleasant circumstances.

They are fishermen from the area who came to find us, between two dives.

We were all a small group on the boat from Mimpi Indah. Indonesian side: our guide Jemi and a buddy of his, Rocky, who is also a dive guide, but who was just accompanying us that day; our captain and his deckhand.

Tourist side: four Italians on holiday; Clare, a young Scottish girl spending her dive-master and then me, the French girl who takes pictures underwater.

On the little swing boat that approaches ours, hookah fishermen. I spot the regulators and the small compressor. I have not been too successful in knowing if they just pick up pots, or what they usually catch, and under what conditions ...

Still, on that day, they made an unusual catch: a mola mola, !

A sick or injured moonfish

Clare can't believe it. She's never seen one. Neither have the Italians. We all open our eyes. Very excited, the guides and the captain get on the little fisherman's boat, to get a closer look at the beast. And take pictures with their cell phones!

The big fish has one vitreous eye, and the other half bloody. Sick, wounded? He's still alive, but not very bright. He's wiggling his big dorsal fin a little, around which the fishermen have wrapped a rope.

From the explanations I got, it turns out that the fishermen found this mola-mola on the surface. The fish was already in bad shape, they had no trouble catching it and attaching it to the hull of their boat.

They do not want to keep it, just show it to us. Moreover, after having chatted with our guys, they undo the ropes and release him.

The fish floats on the flank first, instead of straightening up. He seems unable to swim. Then he regains some strength, sinks under the surface, shakes his dorsal fin, moves a little away from the boat. But he's struggling.

Two swimmers to the rescue

As a result, Jemi and Rocky slip fins and mask and get into the water. They join the mola-mola and swim next to him, on both sides.

They are a bit far. Difficult, from the boat, to see if they push it or drag it, to help it go further offshore. After a long time, they turn around and come back to us. The captain raises the engine of the boat to recover them.

Once on board, they shake their heads. Their efforts did not change the case. The mola-mola was struggling to swim. He is unlikely to survive.

Once the animal was in the sea, the two "rescuers" were crowding around my photos, made with my little spare APN that I had the good idea to take with me (my 7D was in the underwater photo case, with the macro lens, so unusable for taking "normal" photos). Everyone has their own commentary. I tell the molas-molas of Nusa Lembongan.

I don't know if the bangka sunfish survived. I doubt it, given its condition. He looked pretty agonizing to me. But who knows? Nature can be surprisingly resourceful at times.

Small addition below, to console the saddest: the video of the mola-mola, alive and well this one, crossed in the waters of Nusa Penida, near Bali, in 2008 (and I then timidly performing the famous dance mola-mola, underwater choreography very popular at World Diving, excellent dive-shop on Nusa Lembongan) ...