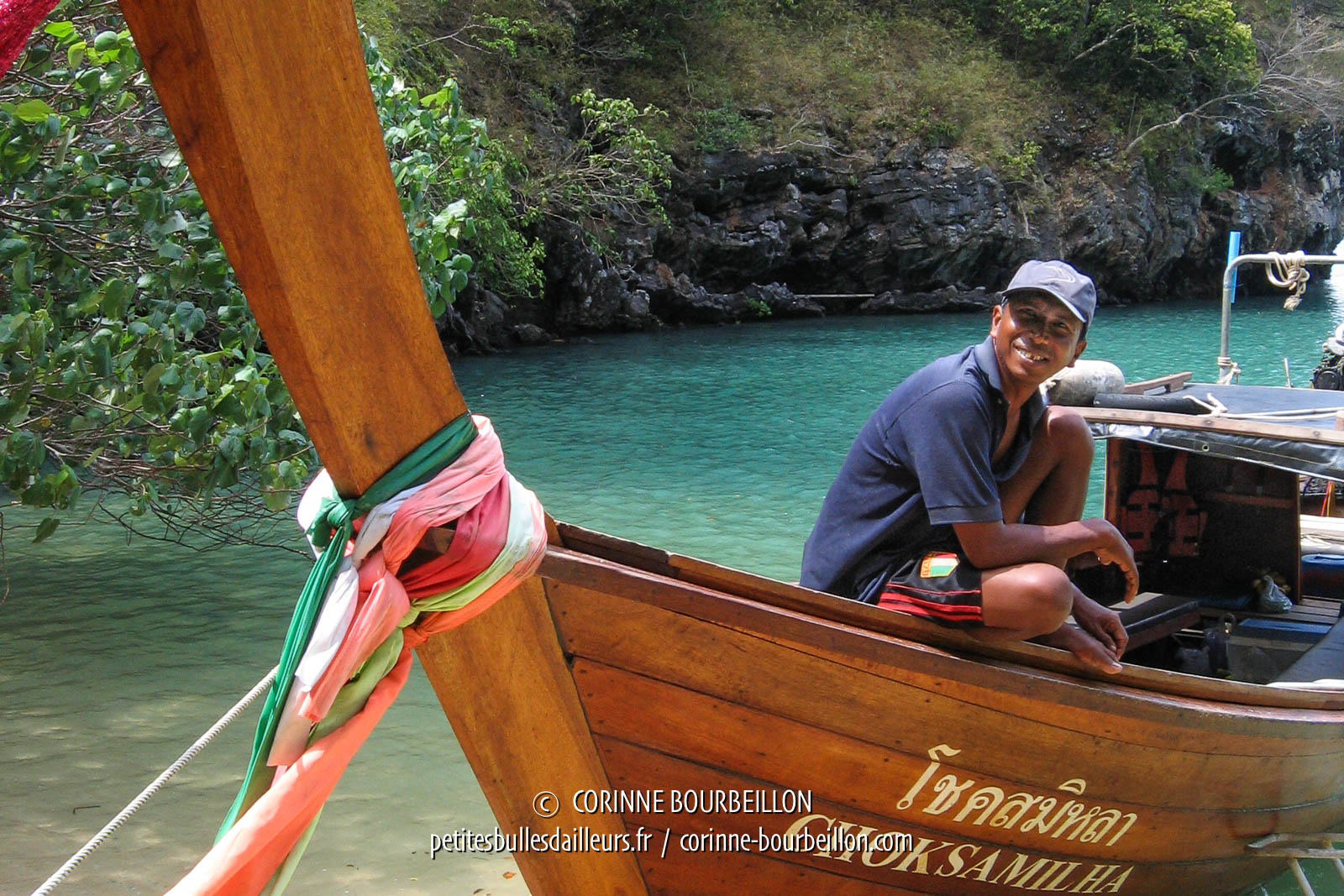 In the heart of Thailand's Phang Nga Bay, Koh Yao Noi is an unknown, peaceful island. Remains authentic despite the proximity of Phuket, one hour by boat.

In the middle of Phang Nga Bay

Koh Yao Noi, February 2009. That's where I chose to settle down, to gently attack this little Thai holiday... Good for me!

There are still bungalows on this small island at 500 baht (ten euros) and traditional wooden houses on stilts.

There are paddy fields, rubber forests, gray buffaloes and brown goats grazing along the embankments. You can ride your motorbike in the wind, along the small road that goes around the island, without fear of traffic, minimal.

But what first catches the eye here is the sea and its spectacular archipelago of islets and limestone peaks, which stand out in the bluish haze of the horizon.

The view from Tabeak View Point

Today, I moved from my small bungalow in Koh Yao Noi Beach where I had first settled, with basic but nice comfort (pictured left below), to another one at Tabeak View Point, slightly less basic, but which has the advantage of being higher, on the hillside (photo right).

Alex, Tabeak's nephew, walks tourists on his long-tail boator "longtail" boat, as they are known throughout the bay. These are large traditional boats, so called in English because of the long engine shaft at the stern - usually a very noisy salvage diesel engine...

We spent the day sailing from rocks to islets, in the jade waters of Phang Nga, stopping on small cute beaches for swimming ...

The holidays are off to a good start!

Only one small problem: my camera (a small compact Canon A95, which has been following me on my travels for several years) starts showing some signs of weakness and only lights up from time to time, when it sings (read below, at the end of this post).

Luckily, it deigned to keep working during the ride... So I took the opportunity to also activate the video mode and bring back a few images for the memory. On the way back, I made a small montage of it, that I add below:

Very very nice, really, this walk in the middle of the karst islands of the bay Phang Nga ...

There is one large town, where the main shops are located, and a handful of villages scattered around the island. According to the brochure with the map of the island, Koh Yao Noi has about 4,000 inhabitants.

We are in the south of Thailand, many people are Muslim. But religion here is not austere or heavy for the foreign tourist that I am. No particular dress constraint to observe as a woman, if not mere decency. Many women on the island wear the headscarf, but not all, and there are many women to wear this kind of mesh hat that is often seen in the islands of the area. Forearms and lower legs remain uncovered and clothes are colored.

Side tourism, there are a lot of family guesthouses and some luxury hotels.

Koh Yao Noi reminds me a little Siquijor in the Philippines and Nusa Lembongan off Bali in Indonesia, for its peaceful and relaxed atmosphere, simple, without artifice.

Even if we can observe new constructions in progress, I am confident that the island will escape mass tourism for some time to come, thanks to its beaches that are just as "heavenly" as those of Phuket or Koh Phi Phi, according to the dreams of postcards sold by tour operators. At low tide, the sand gives way to rock and dead coral, or muddy mangrove sand.

The strike, with its boats aground, has a melancholy and wild side.

I find them beautiful, these beaches not too domesticated. No street vendors or banana boats noisy, no rows of loungers with their hideous parasols.

The beaches of Koh Yao Noi remind me a bit also those of the Malaysian island of Tioman, between the village of Tekek and ABC Beach.

Anyway, enjoy these images. It is not said that I will be able to continue making many more. I was talking about "little problem" above, but it's been my big annoyance since I got here.

One of the electronic components of this modest compact Canon A95 must be dead. Nine times out of ten, when I turn it on, the screen remains black. And the sensor only "sees" black. Even if I trigger it, I get a black rectangle... I have to turn it on and off a good ten times to hope to see it light up, with no guarantee of success.

For spontaneous photos, scenes taken on the spot, it's a bit damn.

On the boat, in Phang Nga Bay, he deigned to walk. But then I left it on for the whole trip, not daring to turn it off for fear that it would go back to "black" mode for good, and it ate my battery in no time at all...

However, I finally have a picture of the attraction that is in all the cameras of tourists visiting the area, the famous rock of James Bond Island!

But I can't show you the well known, more spectacular view we take from the beach... When we saw the crowd disembark by speed-boats on the rocks, to trample this tiny tongue of sand, we preferred to stay offshore and head for other, less crowded islets...

I am a bit sad. It's been four years since I lug around everywhere, this little device. Until then, it was reliable and robust. The heat and the humidity had to be right of him.

I put you here, after the fact, this beautiful video, which is not mine. I unearthed it in 2017, six years after this trip which dates from February 2009. Published in 2014 on Vimeo by the British director Philip BloomIt captures well the atmosphere of the island, which doesn't seem to have changed much since I was there. It's really the anti-Phuket: