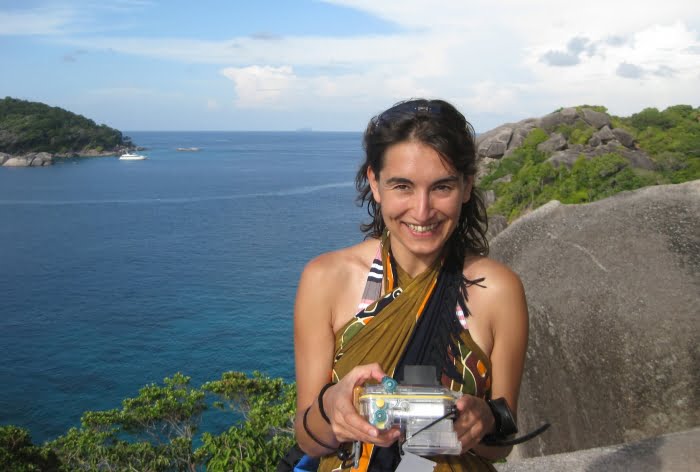 No camera, no photos under water ... Back on my troubles with my photographic Canon Powershot A95 in Thailand.

Many of you have asked me this question, because I haven't told the end of the story: my little compact has indeed died in Thailand. But I found a way to replace it, at Koh Lipe, with another case. The same model, a Canon Powershot A95, bought back from another diver.

That's for the short version. In fact, this camera story is worthy of an episode of Mac Gyver ...

My APN started messing around in Koh Yao Noi at the beginning of my stay. Apparently an internal electronic problem: no more indication on the screen, which remained desperately black in the shooting mode. I tried to take pictures anyway: it was taking a black image. In playback mode, on the other hand, everything was working fine: menus, viewing images already taken, etc. I tried to take pictures anyway: it took a black image.

There must have been some kind of false contact somewhere.

Sometimes I just had to turn it on and off several times in a row to bring it back to life. Or to switch from one mode to another. The screen then deigned to work again in shooting mode and remained cooperative as long as I left it on.

Then, from day to day, he became more and more capricious. One shot he was walking, one more shot.

Death of the camera at the Similan

He finally dropped me at the end of the day, April 4th, on the cruise-diving boat, after the visit of the island No. 8 of the Similan.

But I was lucky in my misfortune for the rest of the cruise: a dive-master kindly lent me his aircraft with a tank.

Another Powershot, but less powerful and less convenient than mine: I didn't even have access to all the manual settings, the buttons on the housing were not designed for it; its batteries didn't last long and were getting very hot, so I always had mist at the end of the dive... I tried my best in Tv mode (priority time) to do a little bit of work. drinking pictures.

Once at Koh Lipe, I borrowed, on the first day, for "terrestrial" souvenir photos, a small APN from Julien, a Belgian who was passing his Divemaster at Forra. I walked around the beaches and fired my guns at full blast!

I also went around the Koh Lipe shops, just in case. But all I found was an MP3 player capable of taking a few poor quality photos, and... this tourist gadget:

The famous mask-camera released a few months ago, seen on all the websites talking about diving ... To rent for 750 baht the day. Bad. I gave up.

I was really lucky. For the underwater photos, I simply managed to get my hands on another A95! Exactly the same model as mine, lent by Régis, an instructor who worked at Forra.

Except... that second device started to unlock as well! But it wasn't as bad as mine. It was just the screen, not the internal electronics.

A spot of black pixels appeared. And she kept getting bigger and bigger after each dive. Suddenly, when I took pictures underwater, I was focusing in the judgment, because of course, the task was in the middle of the focus ... A true curse, these A95.

But I had resolved for a while to disassemble my camera, after a failed attempt on the dive boat Similan. I managed to get a tiny screwdriver.

Regis then proceeded to an open-heart operation on our failing A95s. With both patients, we managed to tinker with a valid device. It was enough to graft my screen on its case.

We then lent the case tinkered from one day to the next, according to our respective dives. As I spent the Rescue, I did few photos under water in Koh Lipe. Regis had to get another device from Hat Yai, before flying to Australia. Suddenly, the day before his departure, he gave me his case for a small fee.

I was able to continue to take photos until the end of the holidays. But now, I seriously ruminate the purchase of a gear worthy of the name.

Four years of tropical climate and underwater moisture have been fatal to my little Canon A95. I now have another, replacement, but nothing says that it takes much longer. It must be about the same age as mine.

So, inevitably, I start drooling on the reflexes and caissons that go well.

But OK. I will probably have to wait a bit. It's expensive, these little beasts. Especially since we must add optics and flashes. In the meantime, I visit the sites that market these beautiful toys. Nothing forbids dreaming ...