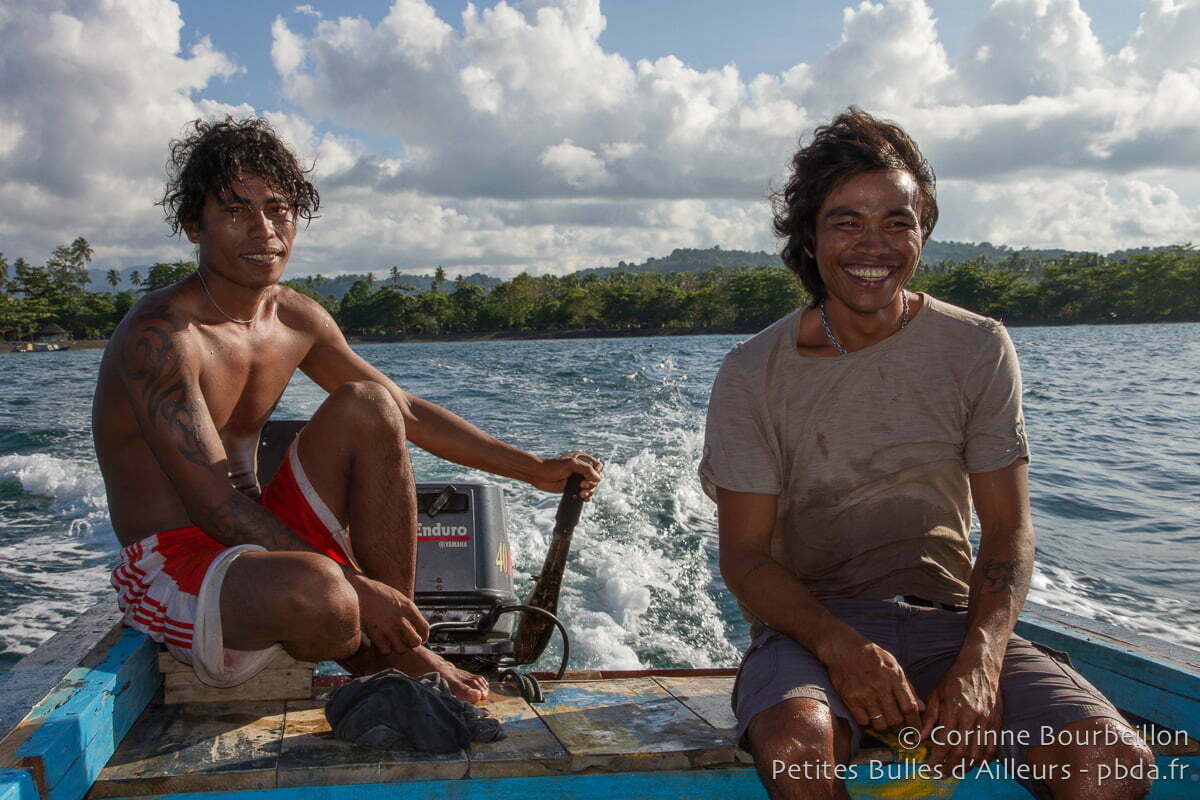 On the way to Bangka Island! (North Sulawesi, Indonesia, March 2013.)

I was (still) gone. A short trip of 15 days in Indonesia. On the program: rest and dives, in Halmahera (Northern Moluccas) and Bangka in North-Sulawesi.

Three weeks ago, I packed my bagagain. This famous wheeled bag acquired three years ago, which has since become the faithful companion of my travels.

It looks like nothing, as it is. But as it contains my diving equipment and my underwater lighting gear (strobes, battery and charger for the waterproof housing of my camera), it does weigh a little. 28 kilos at departure, 29 on the way back, once soaked with the tropical climate's humidity...

At the pier of Sofifi, in HalmaheraOn the big island of the Moluccas (an archipelago located in the east of Indonesia), it took place in a red wheelbarrow, with a brushcutter's box.

After getting off the boat, I freeze for a moment in the crowd of the pier, in the middle of the calls of the porters who rush on the packages and luggage of the speed-boats. A dizzying sensation, exhilaration mixed with fatigue.

I am exhausted after the long hours of flight from France, the very short night near the airport in Jakarta, followed by a takeoff at dawn on Lion Air to reach Ternate, dominated by the Gamalama volcano, and then the Ternate speedboat ride to Sofifi. But so happy to be here!

Now, for me, it's easy. A guy from Weda Resort, with whom I made contact before departure, welcomes me and takes care of everything.

He takes me to the air-conditioned car waiting for me in the disgusting parking lot of the Sofifi jetty, strewn with plastic garbage – bags, bottles, wrappers, cups – scattered to the four winds. Forget the clichés of paradisiacal islands that you have in mind... That's Indonesia too. Here, there is little concern for the consequences on the environment. For the time being.

We still have almost 3 hours and a half of road left, in the jungle, from village to village, to the magnificent Weda Bay, on the other side of the island.

I am here in Halmahera, the first stage of my journey. It is a first discovery. I have never set foot here before. I love the place already.

In Weda Bay, the dives will be beautiful and peaceful. Quiet days, disconnected from the rest of the world. Pure happiness...

The second leg of this little Indonesian journey, a week later, will be Bangka Island, in northern Sulawesi. Here, I know. I am on my third visit to the region.

The first time was in 2007 I had discovered Bunaken Island, Lembeh Strait and the Manado region.

The second time was in 2010  I had returned to dive in the Lembeh Strait, but I had then opted for the small island of Bangka, not far from Bunaken, but much quieter and less crowded. During this 2010 stay in Bangka, I had stayed at the excellent Murex Bangka Resort, then to the very nice Mimpi Indah.

At the time, during a ride on the boat of Mimpi Indah with other tourists, Italians, we went to a nearby beach.

People used to live there. There was an Indonesian flag and an Italian flag at the end of the pontoon, a building under the trees at the back, a few tents on the beach, between Indonesian shanties made of palm leaves.

I had briefly exchanged a few words with a young guy from the beach, an Italian, who explained to me the project they were launching: to build a centre to host scientists and marine biology students, to develop a coral farm, to carry out environmental research?

Three years later, while preparing this new Indonesian trip in March 2013, I discovered a new diving center on the island, called "The Diving Center of Indonesia". Coral Eye. The project of the Italians has become reality. They even welcome, now, tourists.

I e-mailed them. It was Marco, the young guy I'd met three years earlier, who wrote me back. He remembered our visit and our brief conversation. I made a reservation at their house.

I loved this new stay on the island of Bangka, which I had already loved so much in my previous visit in 2010.

Coral Eye is located on a beautiful beach, not far from the Murex resort. The beauty of the place, the atmosphere of the center, the dives, the peace of the island filled me.

Mini 360° made with the iPhone from the pontoon :

I just came back from (sighs). I came back to France a week ago, with my big 29 kilo bag full of tropical humidity, my holiday tan, my mosquito bites and my coral scratches. Indonesia never leaves me unscathed...

I've weathered the heat shock, the jet lag. I had to get used to the cold of that freezing spring, with grey Breton skies. Going back to work newspaper and plunge back into the cauldron of current events.

But I have memories full of my head and lots of photos at the bottom of my hard drive. I tell you very quickly, in the next articles, the terrestrial and subaquatic happiness of this new voyage ...