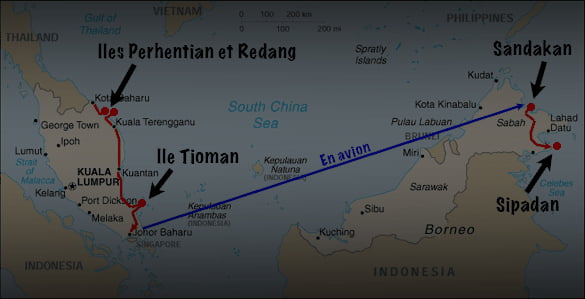 Malaysia: itinerary for a month

I revised my itinerary in Malaysia for July 2006. We have to make choices ... Here is a new map of the trip I'm planning.

From Thailand to Borneo

I eliminate Cherating, Malacca or the park Taman Negara…

I will arrive by Thailand, where I intend to spend a few days in Koh Tao. I'll go down south by train, from Chumphon until Songai Kolok on the border with Malaysia.

I then plan along the east coast of Peninsular Malaysia to the south, then join Borneo. My ultimate goal: the island of Sipadan. 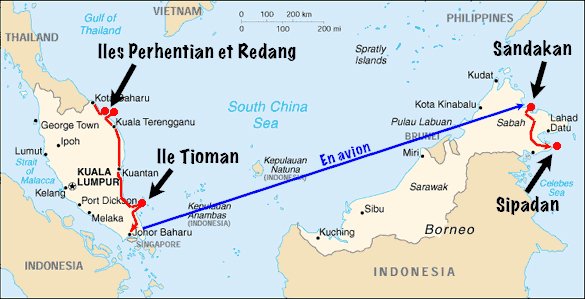 For Peninsular Malaysia, I will settle for the islands on the east coast: the Perhentian and Redangthen Tioman. With bus ride, because there is no rail link on that side.

Then take off Johor Bahru, the border city in front of Singapore, for Borneo. I finally chose to land directly at Sandakan, near the orangutan rehabilitation center of Sepilok, history to have a small step more "junglesque" between two island stops.

Then go on Semporna and Sipadan…

It's going to be a very nice program!