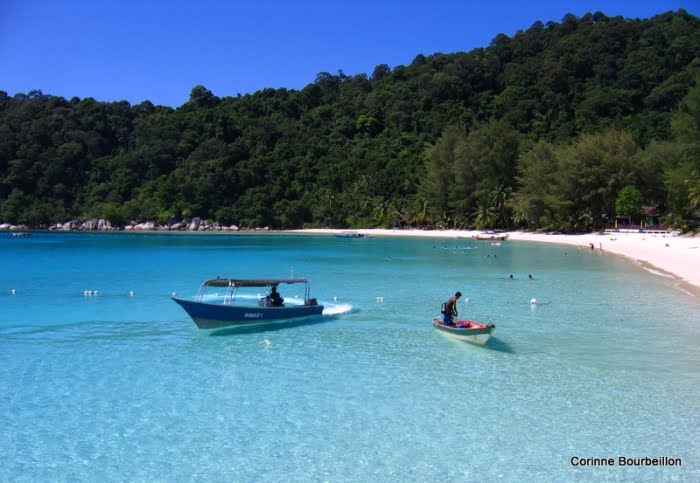 The beach at Perhentian Resort, after Coral View, on Perhentian Besar. Malaysia, July 2009.

Malaysia: my projects so far

I have time to make some projects at D-87... It will be mostly a "diving and lazing around" trip. Hence my choice of stages: islands and beaches.

But it would be a shame not to go inside to see the jungle, one of the most famous and oldest on the planet.

Then I'll think, maybe I'll swing by on the way. Below is a map showing the different places where I plan to stop.

To begin, the islands Perhentian (Kecil the small and Besar la grande) and, in the same sector, that of Redang. To dive and bubble.

Then maybe a stop on the beach of Cherating.

Then head for the island of Tiomanfurther south, unless I make a detour to the interior, for a small junglesque stay at Taman Negara. Who knows if I will not go straight to the other side, to visit Malaccathe former colonial city, which, it seems, is definitely worth the detour? All right, well... Well, we'll see.

Afterwards, anyway, obligatory passage by Johor Bahru south of the peninsula, on the border with Singapore, or by Kuala Lumpur if I'm closer, to fly and fly to Borneo.

There, arrived at Kota Kinabaluafter which, it will be necessary to win the port of Semporna...on the southeastern tip of the island, overlooking the Sulawesi Sea. On the way, possible stops: at the turtle national park, at the orangutan centre, or even in the jungle. I'll do without the climbing at the Mount Kinabalu (which rises to over 4,000 meters), surely extraordinary, but for true trekkers ...

Of Semporna, we embark for SipadanThe island has been famous since the passage of Cousteau, who called it an "inviolate piece of art". Palau Sipadan means "singular island" in Malay. It is said to be one of the five best dive sites in the world. Other fantastic islands for diving around: Mabul, Kapalai…