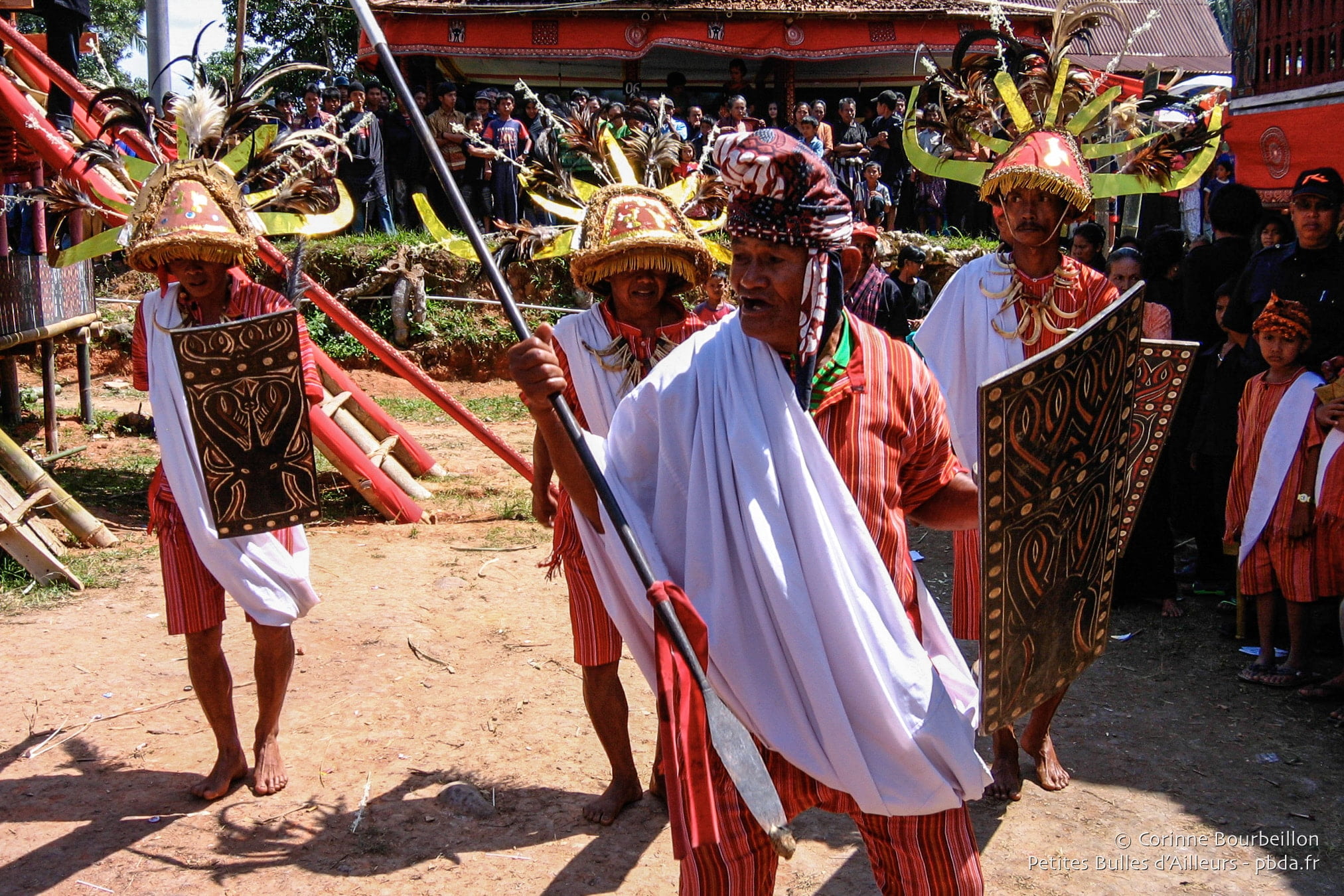 Tana Toraja, it's stronger than you

Here I am in Toraja country (Tana Toraja) in Sulawesi. Here again, a very Christian population, and very attached to its traditions. I attended a funeral ceremony at the village of Rembon, near Rantepao. Spectacular introduction to the customs of the country ...

Everywhere, houses and rice granaries tongkonan, with this typical roof, curved like a boat hull or buffalo horns.

It is a kind of great country festival, mixing animist and Christian beliefs, for an ultimate collective homage to the deceased. A sumptuous ceremony, astonishing, very interesting, which often lasts several days. And not at all the pure "tourist trap" that I feared a little.

In addition to the extended and close family, many outdoor guests are invited to the party. Because it's a party. Cheerful and colorful, spectacular, between animated fair and big meeting family friendly.

A funeral ceremony but festive 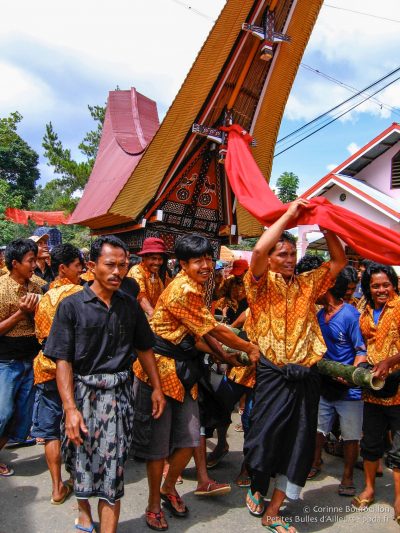 Foreign tourists and other visitors are welcome. Just bring a small symbolic present (usually a cartridge of kretek, local cigarettes, does the trick).

I went there with a Dutch family, Suzanna, Johan and their three children, with whom I sympathized on the Makassar-Rantepao bus. Eight hours, it gives time to chat ...

To get to the ceremony, we chartered a model minibus "large family", with a guide, for this first day, although they like me appreciate the independence, question travel. But we did well.

The region being tourist, we find here people who speak English, and even French, and the explanations of the guide have enlightened us on the strangeness of this burial, far removed from our Western rites.

One of the deceased's granddaughters, who came for the occasion of Makassar, where she lives, very kindly welcomed us into excellent English and immediately put at ease.

Outside "guests" are invited to sit on mats under numbered awnings. We were served food and drink. 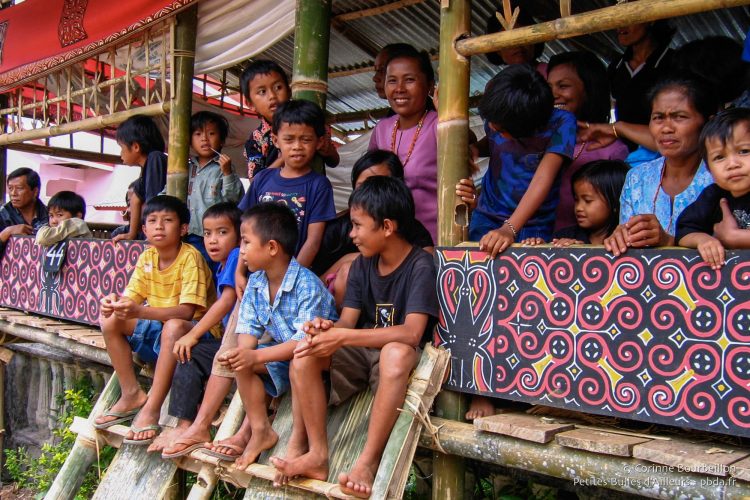 The young woman cordially invited us to take all the desired photos, to film, to circulate everywhere, among the crowd or the kids running in all directions, among the dancers in traditional costumes, shimmering silk shirt and black sarong, between the buffaloes with horns adorned with golden paper and pigs sprawled in slush.

We are a little uninitiated at first. Yet nothing constrained nor stared during this funeral ceremony. It's quite the opposite.

The Indonesian family and guests themselves, armed with camcorders and cameras, shoot. The three children of Suzanna and Johann, blond as the wheats, are the big attraction. Everyone wants to pose with them. Even the widow, who sits little Jelle, 7, in her palanquin next to her ...

It's a joyous, lively celebration. Speeches, songs, prayers, and dances follow one another in the clay court, where the bright red wooden coffin is enthroned, in which the body of the deceased will be transferred. 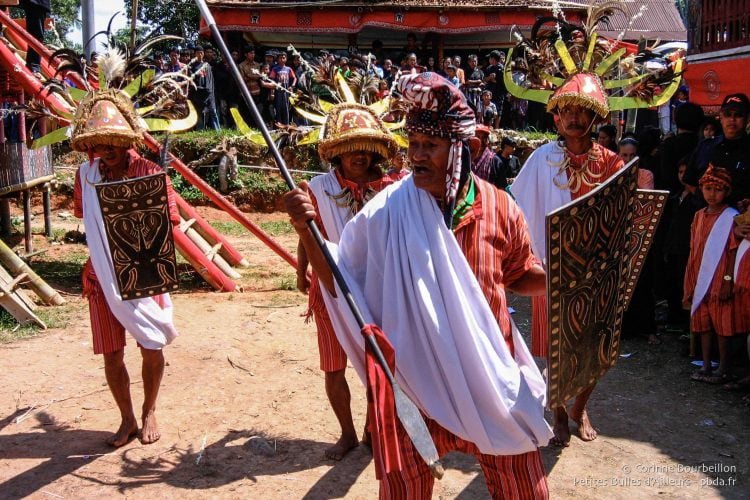 A deceased who has been waiting patiently for two years, embalmed and mummified in his temporary bamboo coffin, using medicinal plants and cloths ... "Our" death has been dead for a long time.

But not quite, according to the Toraja rites. As long as we keep him at home, while waiting for the money necessary for a funeral worthy of the name, he is considered as still belonging to the world of the living, just as we would be a person in the world. coma.

Summer, July-August, is the funeral season. There are everywhere, almost every day, in the Toraja villages around Rantepao, a big, dirty and unattractive town, but where people are super nice. For the ceremony of Rembon, where I was with the Dutch, it was the day of the procession.

The coffin is placed in a kind of bamboo palanquin, with a roof tongkonan. The men hoist him on their shoulders and make him jump and dance, uttering shrill cries and screams of joy, preceded by the procession of women in black, holding over their heads a long strip of red cloth.

At the head of the parade are dancers, with spears and shields, who leap forward with huge bursts of laughter. The buffaloes that will be sacrificed close the march. 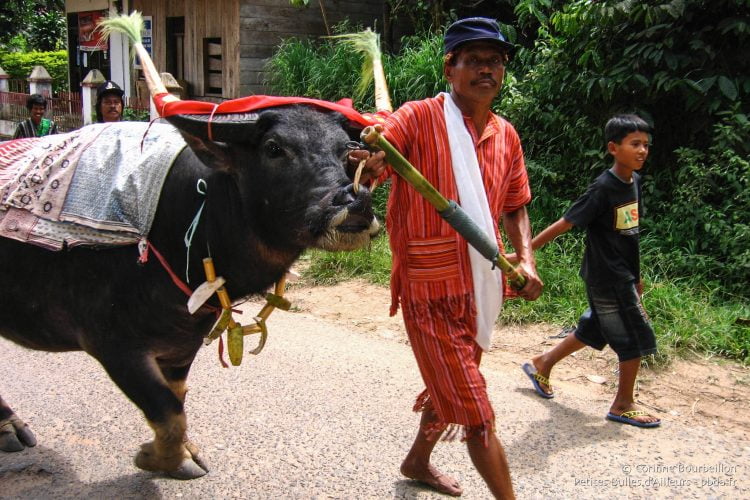 Everyone follows and accompanies the procession in a joyous scramble, running to the right and left to see better, to take another picture, to catch up with the rest of the family.

After, return to the funeral home, and sacrifice a first buffalo, followed by new songs and dances. Not very rude (I do not put the picture), but the guy knew exactly where to slice. "Clean" and fast, despite everything.

An impressive sheaf of blood gushes out, barely done. The beast collapses. In a minute or two it's over. Ultimate jolts, then the dancers reform their circle around the buffalo sacrificed.

There, we left. The Dutch had quickly removed their two daughters and their son, but the eldest, very sensitive, cried with hot tears on seeing the corpse of the buffalo on the ground ...

Small addition. Three years later, in 2010, I returned to Sulawesi, in Toraja country, where I once again attended an important funeral ceremony, almost exactly the same, with the same rituals. See videos and photos at the end of these links :