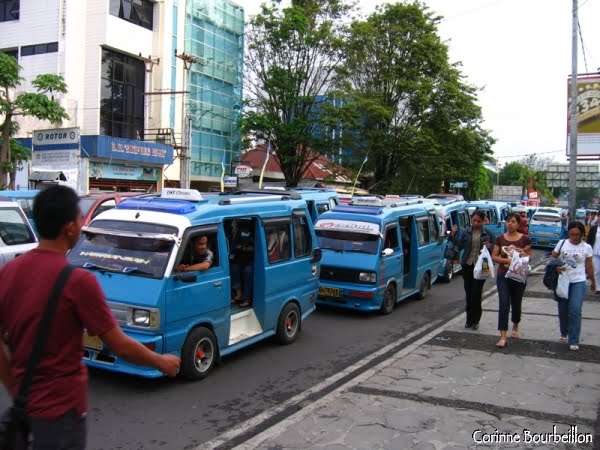 In the streets of Manado. (North Sulawesi, Indonesia)

I am now back in Manado, where I find the civilization and comfort of the modern world: air conditioning and hot water, shopping malls and sandwich club, mobile phone with a cell phone and high-speed internet connections...

The bustle of Manado, the big city of North Sulawesi, with his mikrolets blue which tumble in all directions, makes me a strange effect, after this long journey through the huge island of Sulawesi.

In Sulawesi, as soon as you stray a little from the busiest areas, it is impossible to find a computer with internet. Sometimes there's not even a mobile phone connection. (Hey hey! Finally a real holiday!)

In short, for ten days, impossible to keep the blog ... I will complete it a posteriori.

Coming back to the point where I stopped blogging, I ran out of internet in Rantepao, in the middle of Toraja country. Both of the town's Internet cafes were down for one, closed for the other. I had promised photos, but I shouldn't have!

Here is already a little summary of my journey of the previous days. I will try to deliver the detail in a future article. Below, a map of the island, with my itinerary. 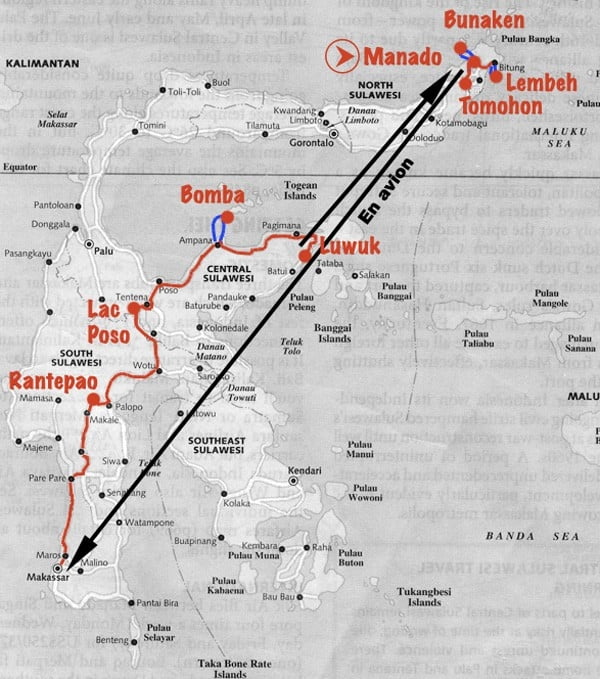 On the way to Poso Lake

Saturday, July 14th : departure from Rantepao, by car with driver, rented with "my" Dutch, for a ride in central Sulawesi. Two nights near Lake Poso, in Siuri Cottages, not far from the city of Tentena.

This corner of Sulawesi has unfortunately been deserted by tourists for several years, because of a serious conflict between Christians and Muslims, marked by numerous attacks, which have caused a lot of deaths ...

The situation is stabilized now, according to our driver, Yunus. He has been walking tourists for about twenty years in all of Sulawesi. There are still many military and police checkpoints along the way.

For these officials, the passage of blond children is a very pleasant distraction. They love getting Jelle, Silke and Ronja, the children of my Dutch friends, out of the car for verification, on the grounds that the little boy and the two girls are on their parents' passports. The kids run and smiles at the checkpoint ...

Cape on the Togian Islands

Monday, July 16th: long-long ride to Ampana, where we take the boat to the Togian Islands ...

Then seven days of laze on the island of Batu Daka, near the village of Bomba, at the aptly named resort Island Retreat. White sand, azure water, coconut palms and coral reefs ... Ultimate dives and sunburn.

Return flight Luwuk-Manado in a cuckoo from the Merpati

Tuesday, July 24th: the return ... 2:30 boat make-up and 6-7 hours of car yesterday, Tuesday, by roads that deserve a blog chapter to them all alone. All this to reach Luwuk, a city located east of central Sulawesi. Because in Luwuk, there is a small miraculous airport that can win a blow Manado wing in 1:30 ... (I preferred it to 15h boat + 12h bus).

The Luwuk-Manado flight takes place in an old Merpati cuckoo clock: 20 seats, 2 propellers, and a very good pilot (impeccable takeoff and landing). Except that the poor guy spent the whole trip trying to protect the flight instruments, sliding Kleenex in the corners above the cockpit window, because water seeps in when it rains... And then it didn't stop raining.

I saw everything, I was right behind. That said, they must be used to the trick. The box of Kleenex is stuck above the dashboard, specially designed for this purpose.