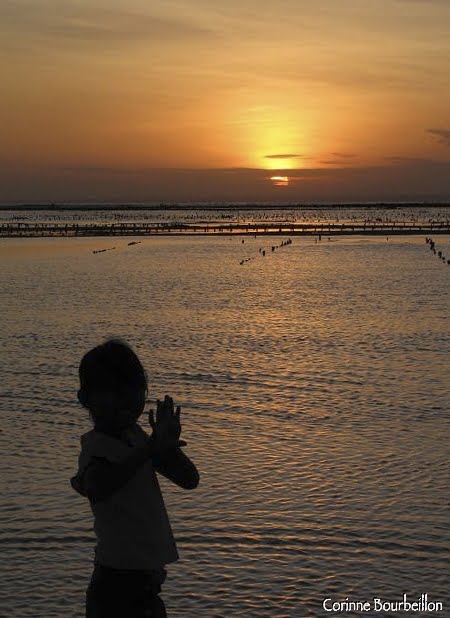 Yes, I'm in a melancholy mood tonight. I leave Nusa Lembongan to return to Kuta, Bali, tomorrow. The return is approaching.

(This article is actually posted with 24 hours late, small worries of internet connection since Lembongan ...) 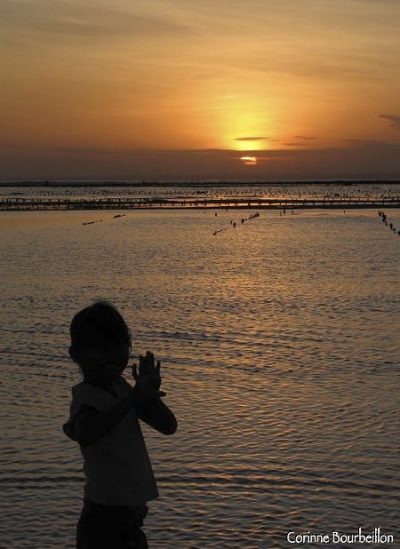 I console myself with a beautiful sunset on the bay of Jungut Batu.

I walk the beach, between kids playing kite or football. The indefatigable seaweed farmers of Nusa Lembongan continue their comings and goings until dusk, laden with their big baskets of sea grass stuffed with water.

The horizon has cleared. Tonight we even see the volcanoes of Bali.

And then the smells of morning and evening incense, at the hour of offerings. And then the gecko's chuckle in the middle of the night. And the strange arrangement of the stars in the immense sky, and the Moon, which here takes the form of a boat and not a crescent when it decreases. (Sigh…) 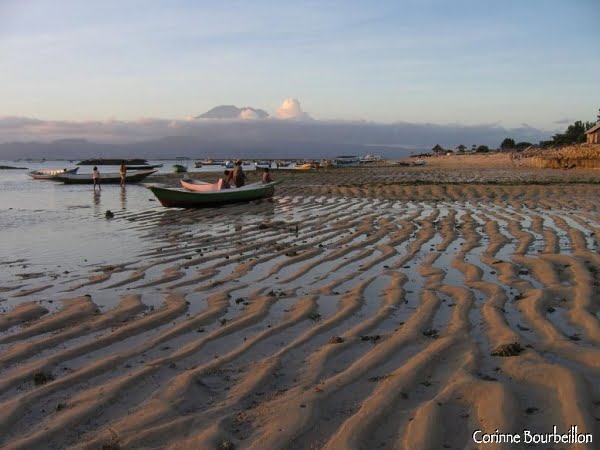 Made is my dive-master for my last day and he is good at finding the big beasts appreciated by divers. He and I are the only ones on the boat who have managed to say hello to a mola mola, !!! 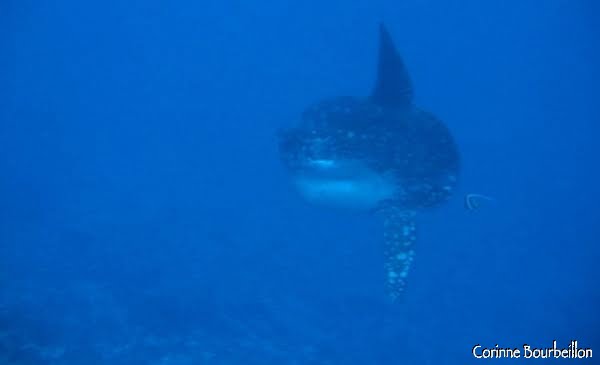 We will still have to wait about forty minutes under water, before we can see him.

But in the meantime, we have plenty to keep us busy: anemone shrimp here, ribbon eels there, and even a small snake hunting in the corals. 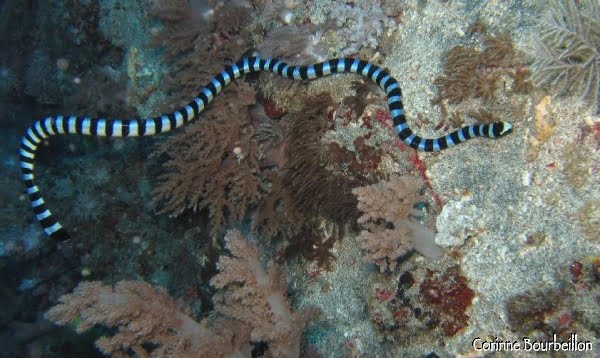 And then, when the bubbles of other divers move away, when the last palanquées begin to rise, we, we remain.

Suspended in the blue, balanced by the surf, we wait at the end of the reef, quietly.

Made turns suddenly to me, widens his eyes, makes me the famous gesture that he and the other dive-masters love to do at the time of the group photos ...

The big moonfish suddenly rises out of the blue fog, completes its flight, just for us, propelled by its powerful fins. Then go back, a little fast, where he comes from.

But still... What a nice gift for my last splash at Crystal Bay! 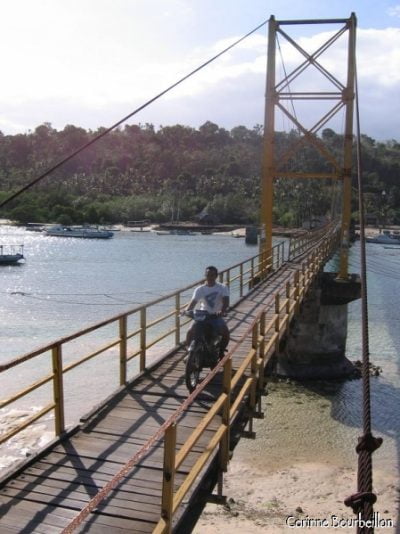 Yesterday, I overcame my siestal mood after diving to go for a ride on a motorcycle on Nusa Ceningan, the neighboring island, which is joined by a yellow scrap bridge.

The bridge is narrow, you have to give way.

We roll on wooden slats that make a funny noise under the wheels of the bike. There are even some missing, but it goes ...

On the other side, superb view of the strait, surveyed by seaweed growers at low tide. In the distance, the waves roar.

I go to the tip of Ceningan, to admire the sea.

It really does the backs here, as in the song. There are cliffs on this side of the island that make you dizzy ...

We see huge waves breaking from the sea. And it's always spectacular to watch the back of the wave swell, disproportionately, until it crashes on the rock. 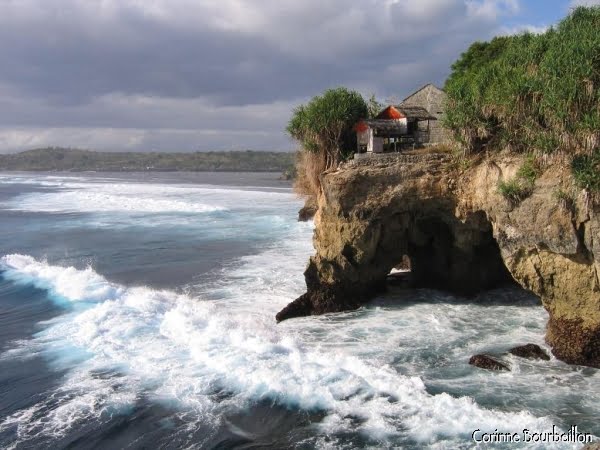 In a bays called Blue Bay, not far from there, the water takes translucent colors and bubbles with great crash, surrounded by impassable cliffs. 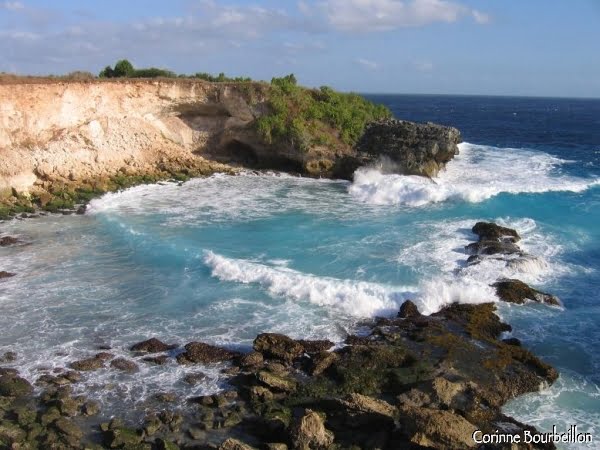 Along the small road that runs along the strait between the two islands, kids play guides for the pale passing faces. "Beautiful view, this way! "And they don't forget to ask for their "tip" after the pictures of the panorama...

Bah. I'm ready to play. They know the best points of view. And the two kids who escort me are nice like anything. The elder is doing quite well in English. He says he wants to continue studying languages.

The strait between Nusa Ceningan and Nusa Lembongan changes appearance from one tide to another. It's splendid… 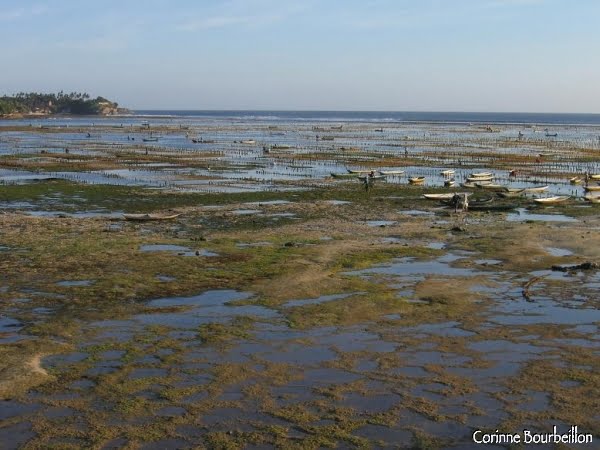 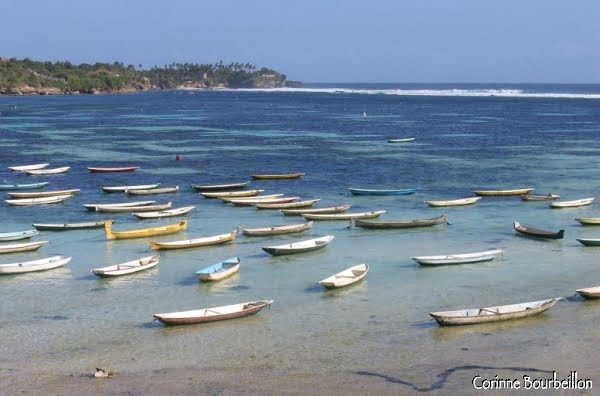 I finish the evening facing the sea and the sky roses, with a tasty balinese curry sprinkles of a Bintang at Linda's.

No more dives, no more sunsets on Jungut Batu. She is tenacious, this melancholy before departure ... ????