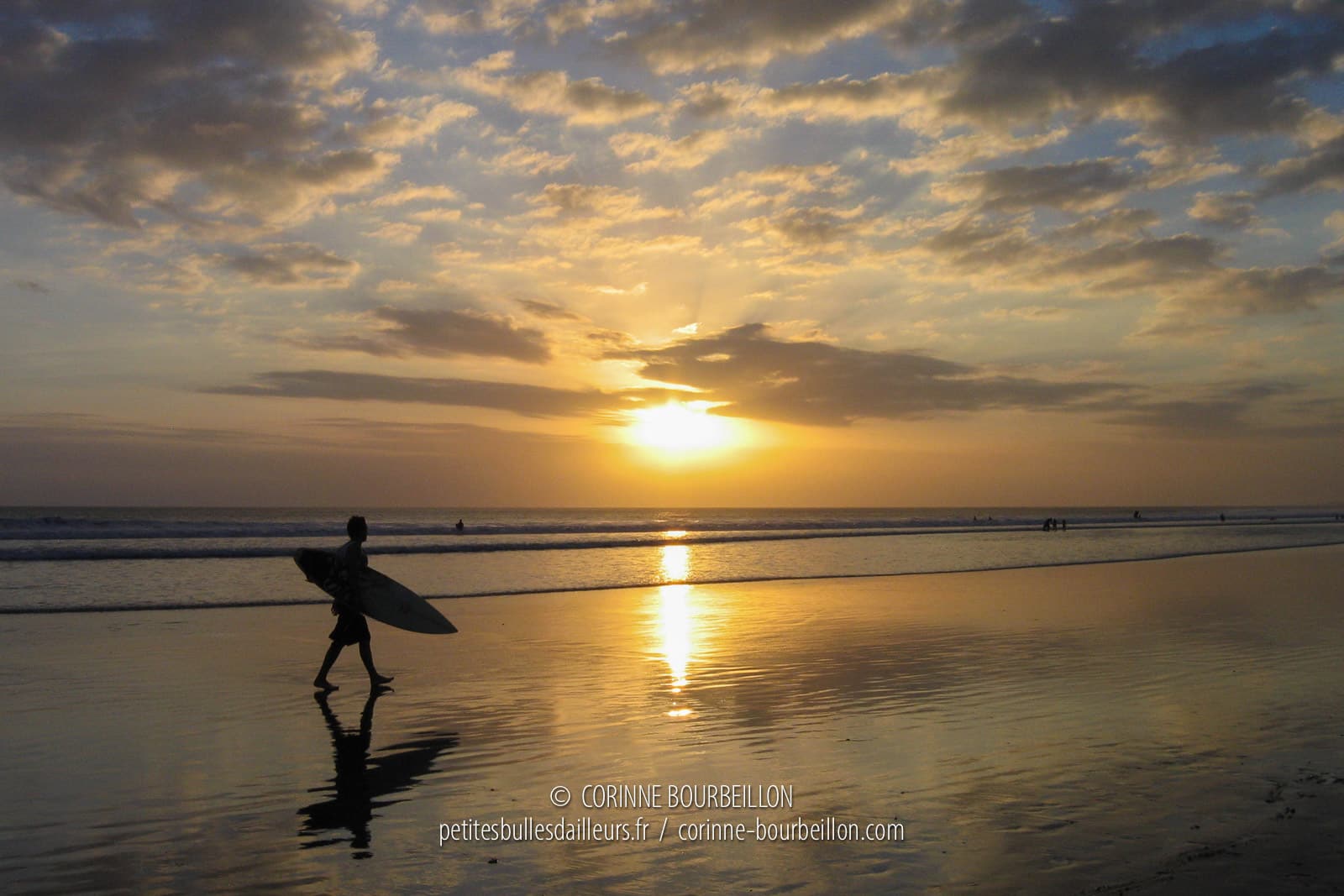 Back to Kuta Beach in Bali

To fight the spleen of the return, I walk on the beach again. The one in Kuta-Legian-Seminyak, known as Kuta Beach. An immense and splendid tongue of grey sand, well packed as it should be, which I love to walk in one direction, then in the other, until the time of the fabulous sunset.

In the evening, when the last rays glow in the sky, families of Balinese come to dive, solitary surfers go to meet a last wave.

Games of wild football are organized between locals and tourists, while kids continue to challenge the wind with their kites.

It is also the time when one jogging, in the cool, along the waves. We see little girls who trotter valiantly and old beautiful burnt by the sun a little ridiculous.

Kuta Beach, with its hawkers, parade surfers and sun-baked tourist skewers, is often decried by visitors in search of "authenticity". Yet, I love this beach very much.

It's so big, that you never really get the impression of a crowd (as long as you don't wallow on the sand among the bunches of other tourists). Surfing and surf schools are now fully part of the local "culture", and Balinese people are the beginners.

In short, this very touristy beach is also a component of the "real" Bali of today, no matter what you think. The huge rollers that roll as far as the eye can see offer a superb spectacle, which I never tire of.

Station with the rollers

On the sand, the atmosphere is relaxed, rather good-natured, very pleasant... You just have to put your sarong on the edge of the wet and dry sand, or walk quietly with your feet in the water, so as not to be bothered by the nice tourist nuisances, who persist in wanting to sell you their trinkets.

Red flags with a beautiful skull and crossbones remind you, as you hurtle towards the waves, that the waves are treacherous around here. The rollers of Kuta Beach are as good as those of the Basque coast. So the best thing to do is to swim in the supervised area.

Moreover, to be watched by lifeguards (lifeguards) from here, frankly, it's not unpleasant...

Yeah, I couldn't resist. Just for you girls... I went to ask him if he'd be willing to do the souvenir photo. Which he gladly accepted, in his nice red shorts, with a bright smile on his face.

I've got another picture, where I'm posing next to the man (but I'm keeping this one, because it's going to make my girlfriends talk again).

But clearly, the actors ofBaywatch can go get dressed! He was rather flattered that I wanted to paint his portrait, this Balinese swimming instructor.

In fact, a guy from the Australian TV, who I fell after, had just passed. For a real report, which will be aired in September, about Kuta's lifeguards job and a surfing competition taking place in the area these days.

I meet the Australian a little further, feet in the water, now somehow his big camera, his microphone and his tripod just above the foam. He is waiting there, in full sun, ready to melt on the first surfer in distress and the team of muscular lifeguards in action ... Hard job, I assure you.

I exchange a few words with him. It's funny, he too was still Nusa Lembongan the day before, to film the surfers from over there. (This neighboring island of Bali is famous for its waves.)

Baptism with  Followers of Jesus

Later, while I polish my tan after a refreshing splash in the waves (in well-supervised zone), I am pulled out of my torpor by songs.

I raise my head, move my hand away from a "manicurist" who was redirecting her trajectory towards me to offer me her services, and discover a group of people, looking like boy scouts with their shorts and white socks in their sandals, accompanied by a guitarist very "Jesus is coming back" like in the film by Etienne Chatiliez.

They sing in chorus, clap their hands. Sounds like a cult. When they finish singing, they close their eyes. They're obviously praying. Then they go together to the sea, surrounding a guy they're helping to ride the waves. I jump on my camera, twist myself into my sarong, and rush towards them. It's a baptism.

I arrive a little late and have only time to make some shots from afar. A red guy with big teeth, noting my interest in the thing, tries to evangelize me by explaining to me the meaning of baptism. I thank him and pretend to be passionate about what he tells me, just to know who these people are.

I finally got my information: "We are the Followers of Jesus. We are from all over the world, America, Australia, New Zealand..." I'll leave it at that. I'm not sure if that's the name of their religious movement, or if it was just a way of explaining to me that they were Christians "disciples of Jesus" from all over the world... I am a miscreant, I remain a miscreant.

Frankly, to choose, I would rather be Hindu ... Just before, I also met three Balinese women in traditional costume, came to deposit their offerings. They knelt on the sand, right in front of the nightclub 66 and its bungee platform, which marks the border between Kuta and Legian.

Always these graceful gestures, this little ritual with incense sticks and flowers... I love it!

I finish my afternoon at the rich people's beach, a little further north, where Kuta beach becomes Legian beach, then Seminyak. And I treat myself to a glass of chardonnay and exquisite sushi at European prices, at the very chic Ku De Ta.

It is a vast resto-bar-discotheque located in Seminyak, so, in front of the beach, with resting beds to wallow in front of the sunset between wealthy people at aperitif time. DJs evenings on weekends. An army of waiters in big black aprons are waiting for you, ready to satisfy all your desires.

Ambient musicA renowned chef in refined cuisine, service and décor. It's good to be rich. Except... I may be a millionaire in rupees, but I planned to hang out at the beach all afternoon, so I left my big wad and my credit card at the hotel. And I barely have enough money to pay for the Ku De Ta bill...

Ugh. I almost did the washing-up instead of watching the sunset!