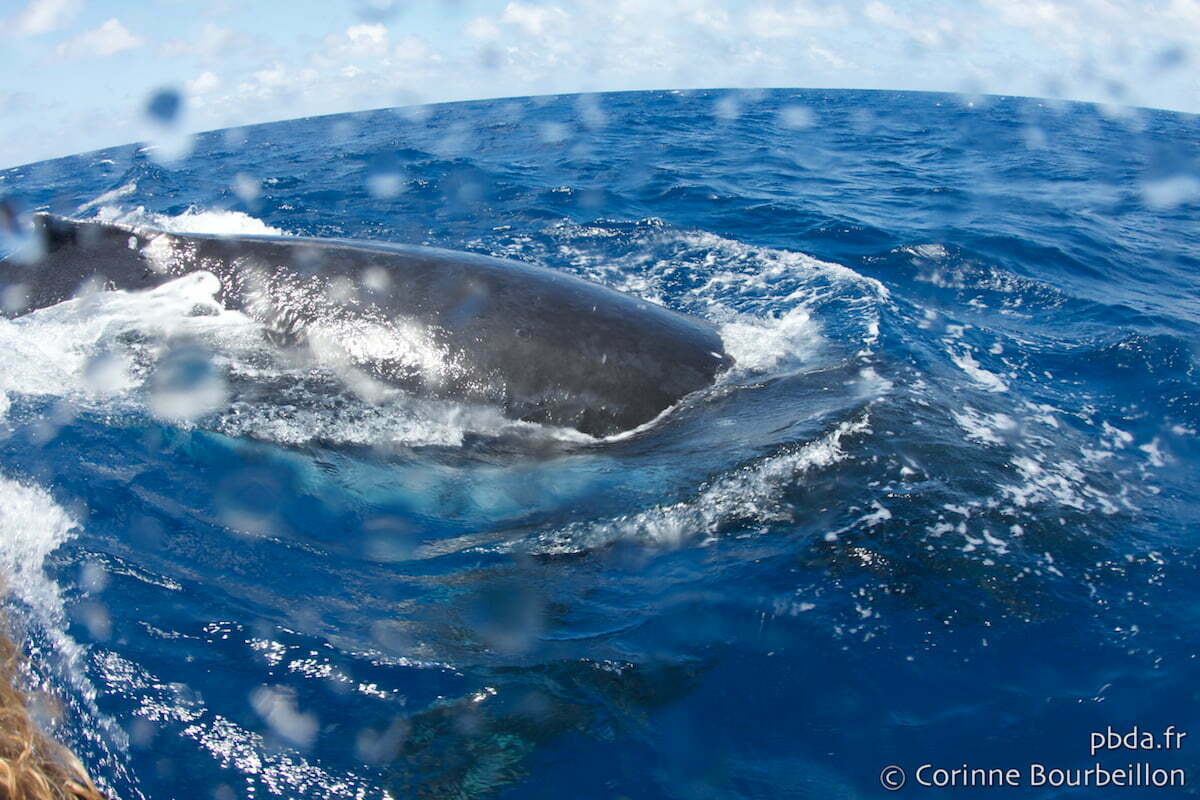 In Polynesia, there are not only lagoons, coconut palms and yukuleles. There's also the ocean and the whales!

A calf not shy

Except on TV, I had never seen a whale before this trip to Polynesia in october 2012.

It happened in the archipelago of the Society, near the island of Maupiti, ocean side, of course.

It was during a diving trip, with the adorable Lionel Clin, monitor of Maupiti Nautique [EDIT: the Maupiti diving center is now known as Maupiti Diving and it is held by Yannick and Nelly]. It's the only structure on the island to do scuba diving (well, "structure" is a big word, let's say that Lionel's house is the center, and to dive, you just have to contact him: he organizes everything for you, he comes to pick you up and takes you to his boat).

That day, there are four of us on the boat: a couple of French divers, Emmanuelle and Bruno, Lionel and myself. We have just finished our dive.

Still wet, we prepare to return to the island when Lionel spots the gray back of a whale between two waves. 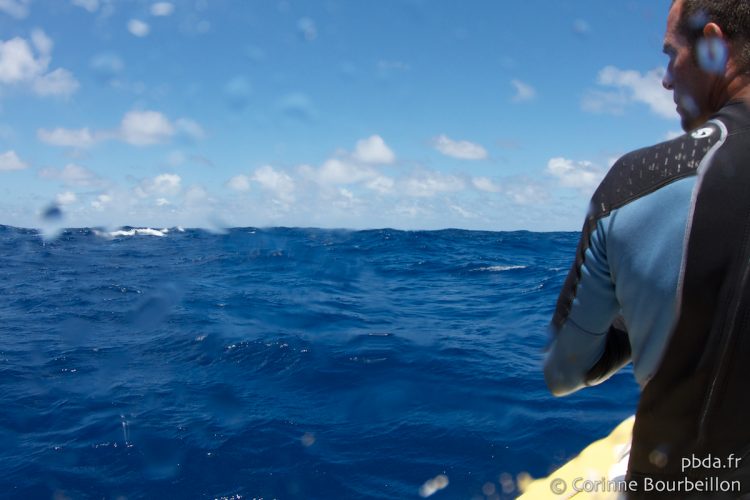 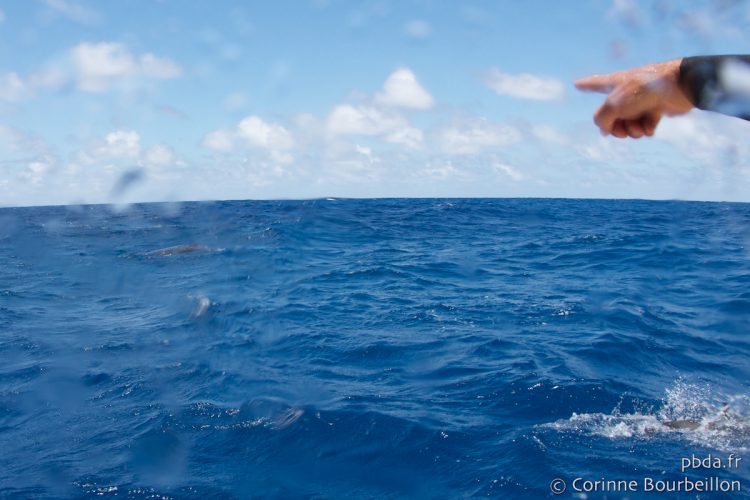 Quickly, I take back my fat waterproof box containing the camera, with which I just made pictures underwater.

I do not have time to wipe the dome, on which the drops still trickle. With the weight of the box, the swell and the drops of water, the photos will be rotten, but too bad.

We're scanning the waves, when all of a sudden, just off to port, there's this funny noise: "Pfffff... sprit..." At barely 2 meters from the hull of the boat, a whale comes out!

Or rather, a whale calf. Yes, it is smaller than the whale seen further away (the mother, presumably), but still a nice size! Probably bigger than our boat. 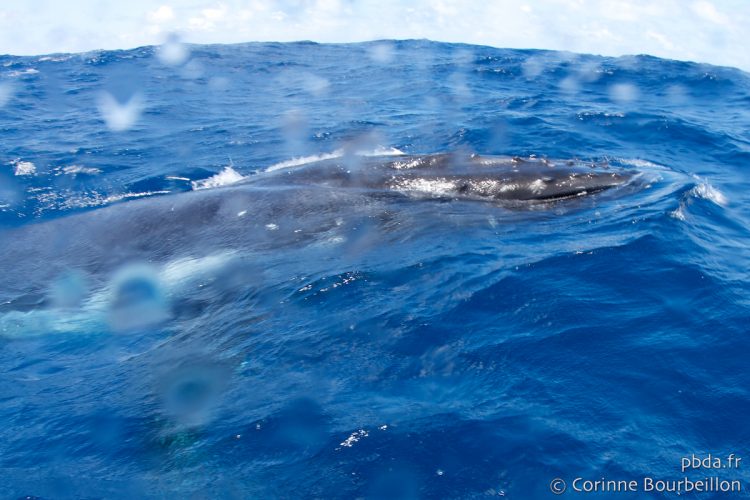 Not shy at all, he came to see us up close, really very close - we realize it well on one of the poor pictures that I managed to take, since there is even in the frame, in the left corner, the blond hair of Emmanuelle ... 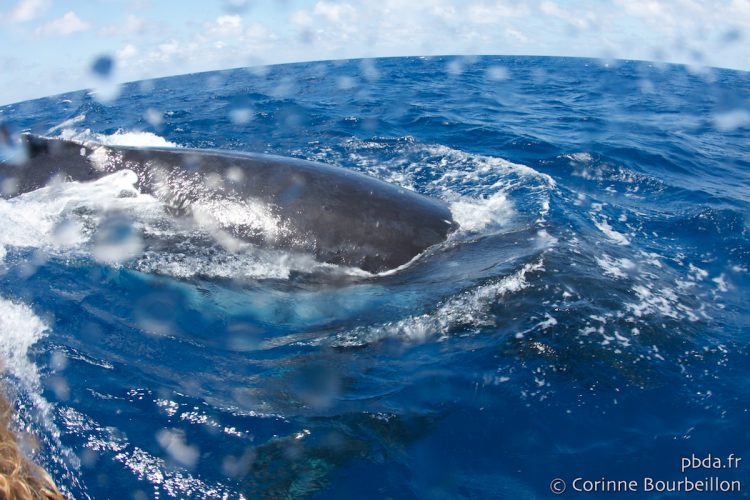 We have just enough time to catch a glimpse of his curious little eye, a brief moment, and there he goes! He probes under the boat, disappears, and comes out the other side, to starboard! He stays a little on the surface, distancing himself this time, then disappears underwater again. 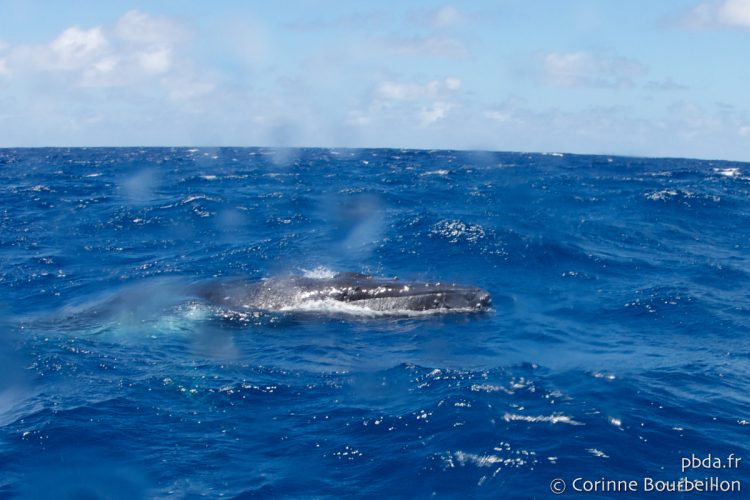 We hesitate for a moment to get into the water, in palms-mask-snorkel only, to try to see the whales again, but the waves and the current dissuade us.

We come back, excited, amazed ... Not coming back from our luck.

The breath of the whale

Since I've been scuba diving (my first bubbles date back to 1999), I've had the chance to cross paths (on a boat or underwater) with some of the big animals that live in the sea: dolphins, sharks, moon fish, manta rays and even whale sharks (well, ONE whale shark, in Richelieu Rock, Thailand, in 2006)…

But never before, I had met whales.

So it's got to be something to see the huge, grey, dripping back of a big beast coming out of the water, close to the boat, going, "Pffff... " Even before being impressed by the show, by the size of the animal, I am touched, upset, by its breath.

There is nothing more moving than this hissing, this exhalation, which means: this beast is not a fish, this beast is like me, it breathes air, just like me...

Short. I met my first whale in Maupiti, Polynesia. And I still do not recover.