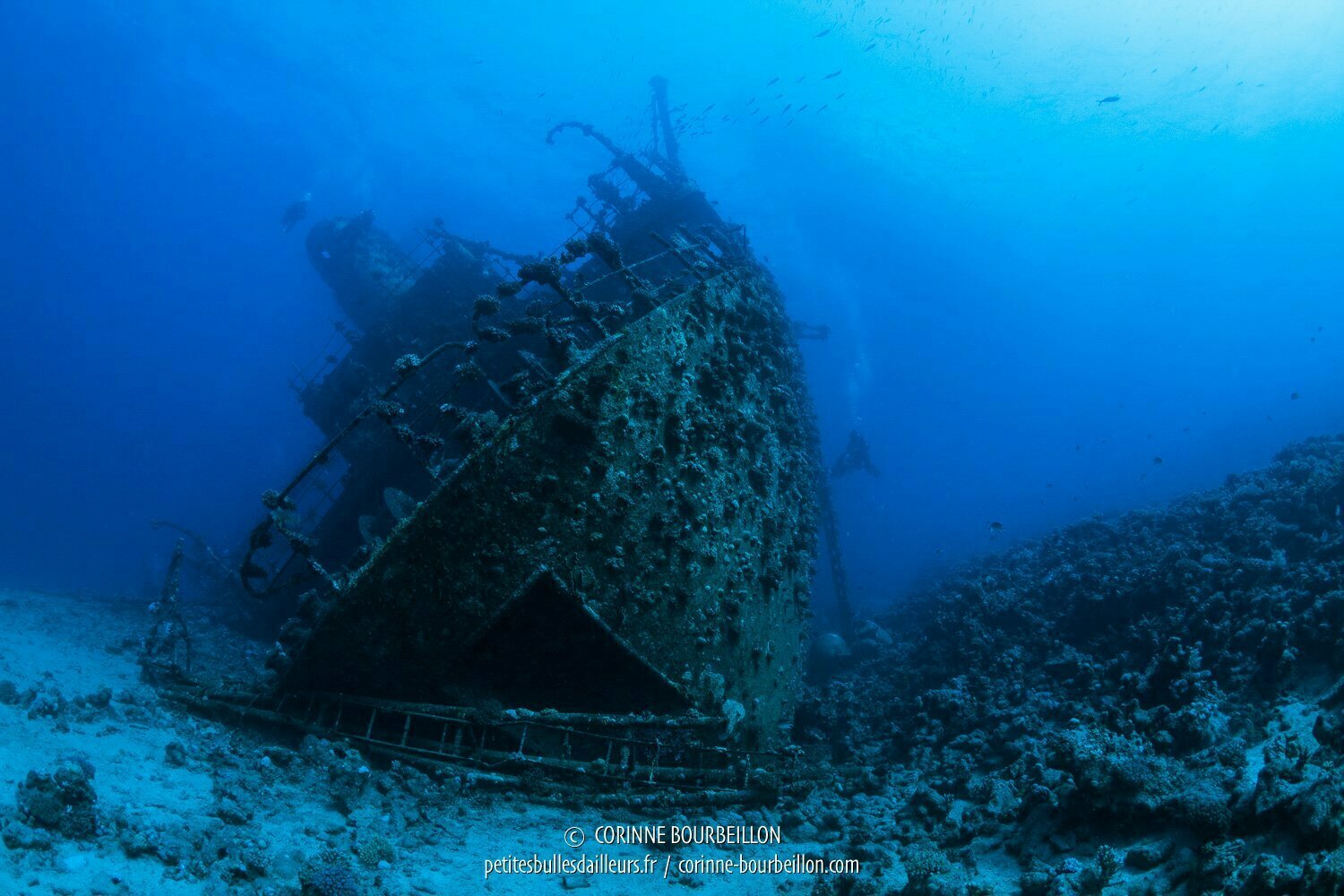 This is my last wonder as an underwater photographer: sunken ships in the Red Sea, colonized by coral and fish. Spectacular wreck dives in Egypt!

They're called Thistlegorm, Giannis D, Carnatic, Numidia. These are four imposing wrecks, which I was able to photograph in october 2016 in Egyptian waters, in the Red Sea.

Some are quite old: the sinking of the Carnatic dates back to 1869 and that of Numidia à 1901. The most recent of the four is the Giannis D, a Greek bulk carrier that went down in 1983. The most storied is the history of the Thistlegorm...sunk in 1941 by German bombers.

These are not my first wrecks, in my life as a diver, but they impressed me a lot, by their size (all around a hundred meters) and their beautiful state of conservation.

What level ? These four wrecks in the Red Sea are accessible by recreational diving, from level 2 (N2) or fromAdvanced Open Water (AOW), with a minimum experience of about 50 dives. The ideal is also to have a certification Nitrox (air enriched with oxygen) to maximize the time spent at the bottom.

How? I discovered these wrecks in diving cruise in october 2016aboard theExocet. I really appreciated the organisation, the comfort and the atmosphere on this boat. The cruise mixed photographers and freedivers. These four wrecks are "classics", on the program of most diving cruises organized in the Red Sea. Some of them can also be taken as day trips, such as the Thistlegorm from Hurghada or Sharm el-Sheikh.

Learn more. If you read English, you will find a lot of information about the Red Sea wrecks and their history on this site: The Red Sea Wreck Project.

Shipwrecks are really not dives like the others. During the descent, the heart beats a little stronger, the eyes widen, the excitement increases. And even if they are well known sites, many of them already explored, the atmosphere is still shrouded in mystery, as the darker mass of an immense ship lying on the bottom gradually becomes clearer in the blue fog of the water...

There is beauty and emotion in the spectacle offered by these immense structures abandoned at the bottom of the water, which have become artificial reefs appropriated by fish and coral. But even when time has passed, the feeling of being on the scene of a drama is always a little present.

"There are wrecks that make you uncomfortable." recognize Jenny and Niko, our guides on theExocet. They are thinking in particular of the Salem Express (where we didn't go), which has become a controversial dive site. This passenger ship sank in 1991 on a reef off Safaga, with hundreds of Egyptian pilgrims returning from Mecca on board. There were officially less than 700 passengers and crew on board, unofficially many more. Reports put the death toll at around 470, but the death toll is likely to be much higher. Many bodies are still believed to be at the bottom of the wreckage, which is considered to be a shrine.

With regard to the four wrecks that I present below, the wreck of the Carnatic (1869) killed about thirty people and that of the Thistlegorm (1941) nine dead, but those of the Numidia (1901) and the Giannis D (1983) did not make any victims.

Of the four, this is probably my favorite wreck! It was Jacques-Yves Cousteau who first discovered and explored the Thistlegormin the 1950s. Today it is the most famous wreck of the Red Sea. We can enter and explore the holds, which are a real submarine museum of the Second World War ...

Update - July 2017: Thanks to this wreck, I found myself in the newspaper The Parisian, who asked me to testify for a summer series! A copy of the page can be seen here →. Treasures of the abyss: touched, sunk. The internet version of the article is here →. Diving: the wreck of the SS Thistlegorm, ship sunk in the Red Sea in 1941

We did two dives there, but I would have done one or two more, as the wreck is so vast, there is so much to see, inside and outside... To visit it without getting wet, I invite you to go and see this awesome 3D presentation, which I found on my way back, doing research on the Thistlegorm.

Below, some of the photos I made during these truly spectacular dives ...

Type of vessel : cargo bulk carrier Greek. Length : 99 m. Construction : 1969, in Imabari, Japan. Launched as Shoyo Maruhe took the one from Markus in 1975, then from Giannis D in 1980 when it was sold to the Greek shipping company Dumarc Shipping & Trading of Piraeus. Shipwreck: April 19, 1983. The ship had left Rijeka in Yugoslavia (now Croatia) and after passing through the Suez Canal was heading for Jeddah in Saudi Arabia, with a load of wood. Depth: 25 to 27 m at the bottom, 5 m at the top of the gantry.

There are four wrecks on Abu Nuhas Reef (including the Carnatic, which I present to you below). The wreck of Giannis DThe reef, broken in two (the stern slipped along the reef years after the bow) is particularly "photogenic" from the outside and when I passed by, the visibility was excellent. I would have liked, there again, to have been able to spend more time there and make some more dives...

I was enthusiastic about the outside, but the inside left a more unpleasant impression. Nothing difficult to penetrate, but everything is tilted at 45 degrees, so that I almost felt dizzy to the point of nausea at times, with the desire to get out as quickly as possible... These tilted corridors are really disturbing for the brain! It's a rather unpleasant sensation that many divers in this wreck feel. But the place is really extraordinary, with a lot of details to observe, and I concentrated on the play of light.

Type of vessel : British mixed transport vessel (goods and passengers), both steam and sail. Length : 90 m. Construction : 1862, Cubitt Town, near London. It was armed in 1863 by the company Peninsular & Oriental Steam Navigation. Shipwreck: September 13, 1869. Setting out from Suez (the Suez Canal was not inaugurated until the following month), it was on its way to Bombay, India, with a cargo and 230 passengers and crew on board. He too was embedded on the reef... (He is right next to the Giannis D and there are two other wrecks nearby in Abu Nuhas, so if the place is dangerous for navigation). Depth: 27 m at the bottom, 17 m on the highest part.

The wreck of Carnatic...don't look like the others. Yet I found it particularly beautiful and moving. It's been lying there for almost a century and a half...

The interior, with the blue light filtering through the metal skeleton of the hull covered with concretions and the thousands of glass fish still moving is magnificent!

Type of vessel : British cargo. Length : 137 m. Construction : 1901, Glasgow, Scotland, for the shipping company Anchor Line. Shipwreck: in the night of July 19 to 20, 1901, on the reef of Big Brother Island, which was nevertheless signalled by a lighthouse, during its maiden voyage between Liverpool and Calcutta, India. She was carrying railway equipment. Depth: 15 m for the debris from the bow section closest to the surface and up to 80 m for the stern section, inaccessible during recreational diving.

The interesting part really only starts from 30-40 meters, so you don't really enjoy it as much as the other wrecks (for non-divers: the deeper you go down, the more air you consume and therefore the faster you empty your bottle). The Numidia has a massive, ghostly, quite impressive. To say that she has been there for more than a century ...

I didn't take the time to sneak inside with Jenny, our guide, and my partner Françoise, fascinated as I was by the profusion of corals outside! Fairy.

But I'm still a little hungry, for not being able to spend more time on it. We chose to go up along the Big Brother reef, to make the dive last a little longer, in the hope of crossing it on the way back, some long-legged sharks. The tek divers, equipped to push deeper exploration towards the stern, are fond of Numidia.

These famous wrecks of the Red Sea were all unpublished for me, who are more used to drag my fins in the waters of the Indo-Pacific zone. And there are many others, near which we went, and where we did not dive ...

The often excellent visibility of the Red Sea adds to the pleasure of discovery and underwater photography: you can really catch a glimpse of the wrecks and try to recreate their atmosphere. I keep a marvellous memory of these four wrecks!

Other wrecks, in Indonesia and Brittany... The wreck of Liberty in Bali (Indonesia) remains one of my favourite wrecks, which I always take great pleasure in diving on, year after year. Recently, in 2015, I also dived on the wreck of a small plane during the Pacific War in Raja Ampat, Indonesia, and a long time ago, in 2003, I even plunged theAmoco Cadizin Brittany. And I also had the opportunity to explore many other wrecks, big and small, more or less spectacular, during my travels, in Thailand, Malaysia, the Maldives...