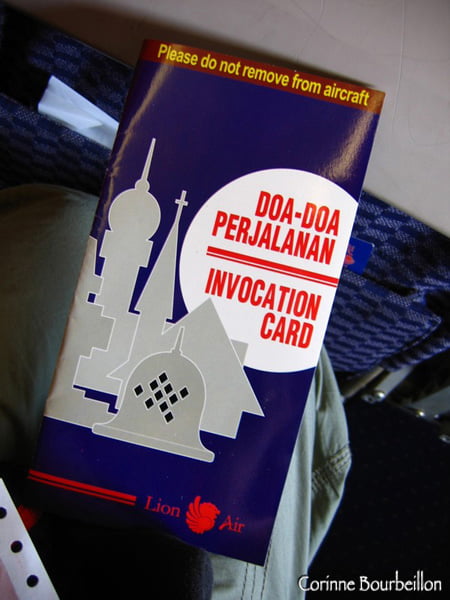 Today I'm flying to the other end of Sulawesi with Lion Air. Flight Manado, Makassar, departure 7:55, arrival 8:30. The plane is full like an egg. I am the only Westerner. 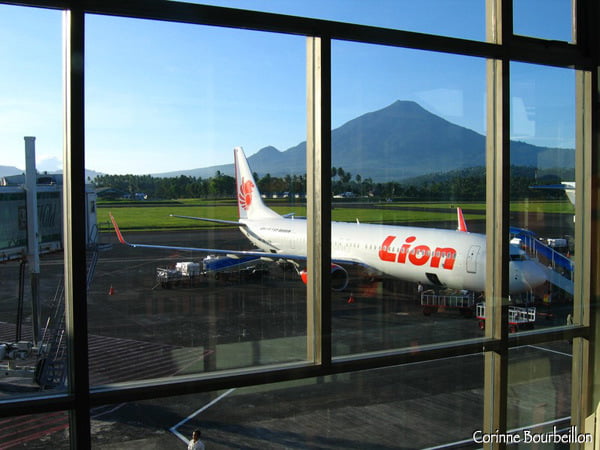 I booked my Lion Air flight from the very efficient agency Star Express from Manado, for Rp 769,000 (about € 60). This is the high fare, it seems, as I am in the middle of an Indonesian holiday.

I do not intend to stop at Makassarbut inquire directly with a bus for Rantepao. I know that there is one at 10am, but I have already done a cross, thinking instead to take the one of 14h.

I'm not sure that the plane leaves on time, and on arrival I may lose a lot of time getting the luggage, after which it will take a taxi to the bus terminal, which is not not exactly next to the airport.

But I forget that in Indonesia, time sometimes has elastic virtues. We call that "Jam Karet"…

Return of Tomohon yesterday, late in the morning, I did not want to go back to Minahasa. I opted instead for another mid-range accommodation, theHotel Central of Manado. Not much to say about it, except that it is also strategically located on Jalan Sam Ratulangi, but much closer to what I consider to be the "centre": namely the shopping malls of the Mega Mall (With the super high-speed internet center on the top floor) and the nice little restaurants facing the sea just behind. 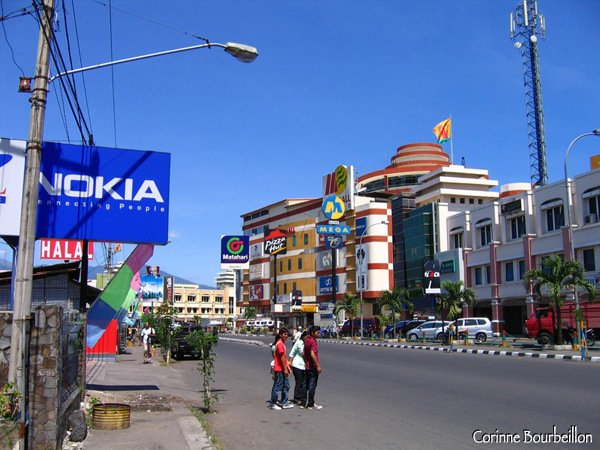 In short, a hotel without charm, purely functional, but that suits me for the night. Taxi for the airport at 70 000 Rp. Manado is definitely not cheap for tourists on the mop.

At the airport, the Rp 30,000 domestic tax still has to be paid after check-in. A lout tried to grill me in the queue in front of the baggage scale by putting his bag on the tray, but I politely but firmly put it back in its place. What the hell!

Take off with Lion Air

On the tarmac, dominated by the sloping profile of Mount Lokon, I glance at the plane from Lion Air that I will take. It looks ok. 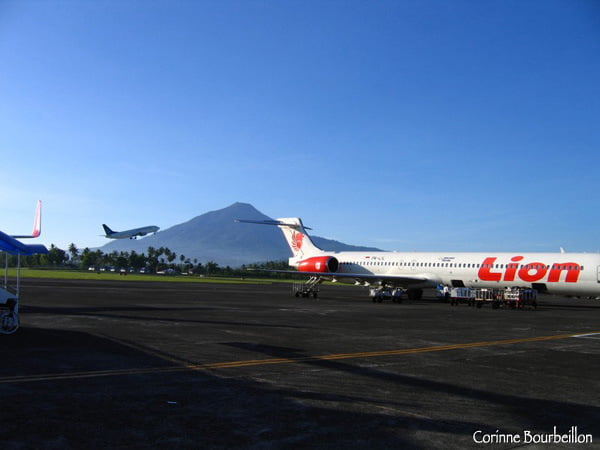 I learned from Christiane Froggies that Indonesian companies have just been blacklisted in Europe. But frankly, it does not scare me any more than that.

Well, once inside, I still notice that the light strip on the ground, supposed to indicate the emergency exits, is split and repaired with tape. I prefer not to imagine that the rest of the device is perhaps patched in the same way ...

I am frankly amused by the discovery I make in the pocket of my seat: a document named Invocation Card, much more fascinating than the booklet of the safety instructions.

This pamphlet contains prayers, in Indonesian and English, for almost all faiths, so that the journey goes well.

The prayers, for Muslims, Protestants, Catholics, Hindus and Buddhists, basically say this: "O my God, may this plane arrive safely, may the elements be favorable to us, and may the crew bring us safely to our destination, Amen. »

I read all the prayers from one end to the other, and it worked.

We arrived safely at Makassar. With a lot of delay, anyway, since the plane did not leave on time. Jam karet ... Elastic time.

Update. On the same theme, I wrote this other article six years later (as I continued to borrow Lion Air often during my travels in Indonesia):
→ Pray your prayers on Lion Air (bis)

I lose a little more time at the airport, chatting with nice touts who quickly found that I wanted to go to Rantepao. One wants to send me to his hotel mate, the other to his tour operator.

But I do the girl who already has her hotel reservation and knows perfectly where to go to visit the country Toraja. So, since I'm French, they show me their "Hello, how are you?" and tell me about Zidane.

But now, driven by a sudden intuition, I decide not to hang around anymore and run to my bus terminal. The beaters consult their watch, dubitatives. Kindly point out that I have plenty of time for the 14h bus.

It's that they would continue to talk to me, guys ... But they are nice and courteous, they drive me all together at the taxi counter "prepaid" and even carry my bags... Pfff! Too easy.

The bus terminal for the north is in "zone 1", fare 64 000 Rp. The journey is not that long. On the spot, I do not let myself be impressed by the horde of stalker-stalkers stalkers of the car park, who melt on the travelers landed mikrolets and taxis, and I walk straight to the wicket of the wharf, to which they do not have access ( you have to pay 500 Rp).

There, I discover a beautiful big-bus company Litah. We immediately stuff my bags in the cargo hold. I'm no sooner sprawled in a huge reclining chair, tasting the coolness of the air conditioning, as the bus is shaking.

That means I'm going to come to Rantepao at the end of the day, around 6:30 to 7:00. And so, and above all, to be able to admire the mountainous landscapes, reputedly splendid, at the gates of the Toraja country, because we will be there before nightfall! Impossible thing with the 2pm bus... 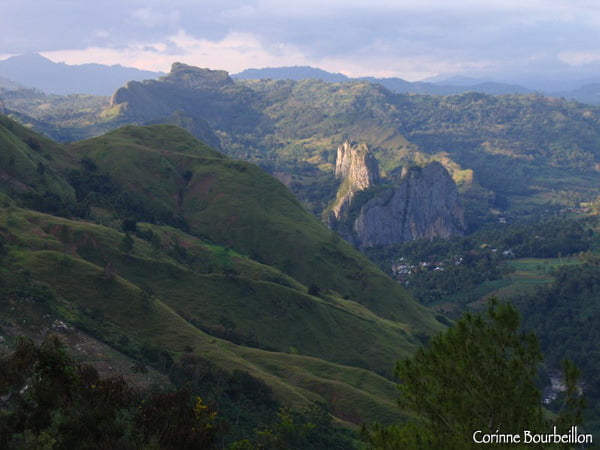 I happily abandon myself to these pleasant reflections, thinking that I surely did well, when I was suspended between heaven and earth, to address all these prayers to several gods at once ...